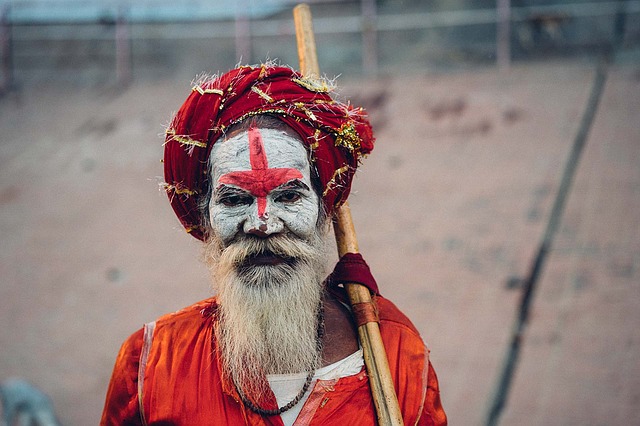 The Aghori Babas are ascetic Shaiva sadhus, and have been known to engage in controversial rituals with the dead. They often dwell in charnel grounds, have been witnessed smearing cremation ashes on their bodies, and have been known to use bones from human corpses for crafting kapalas (which Shiva and other Hindu deities are often iconically depicted holding or using) and jewelry. Because of their practices that are contradictory to orthodox Hinduism, they are generally opposed by other Hindus.

It is believed that the Aghori possess mystical healing powers, which are gained through their rituals/rites. They are also known to meditate and perform worship in haunted houses.

Aghoris are devotees of Shiva manifested as Bhairava,[5] are monists who seek moksha from the cycle of reincarnation orsaṃsāra. This freedom is a realization of the self’s identity with the absolute. Because of this monistic doctrine, the Aghoris maintain that all opposites are ultimately illusory. The purpose of embracing pollution and degradation through various customs is the realization of non-duality (advaita) through transcending social taboos, attaining what is essentially an altered state of consciousness and perceiving the illusory nature of all conventional categories.

Aghoris are not to be confused with Shivnetras, who are also ardent devotees of Shiva but do not indulge in extreme,tamasic ritual practices. Although the Aghoris enjoy close ties with the Shivnetras, the two groups are quite distinct, Shivnetras engaging in sattvic worship.

Aghoris base their beliefs on two principles common to broader Shaiva beliefs: that Shiva is perfect (having omniscience,omnipresence and omnipotence) and that Shiva is responsible for everything that occurs – all conditions, causes and effects. Consequently, everything that exists must be perfect and to deny the perfection of anything would be to deny the sacredness of all life in its full manifestation, as well as to deny the Supreme Being.

Aghoris believe that every person’s soul is Shiva but is covered by aṣṭamahāpāśa “eight great nooses or bonds” – sensual pleasure, anger, greed, obsession, fear and hatred. The practices of the Aghoris are centered around the removal of these bonds. Sādhanā in cremation grounds destroys fear; sexual practices with certain riders and controls help release one from sexual desire; being naked destroys shame. On release from all the eight bonds the soul becomes sadāśiva and obtainsmoksha.

The documentary below explores the mysterious lives of the Aghori, and is extremely interesting. Watch below and share your thoughts!