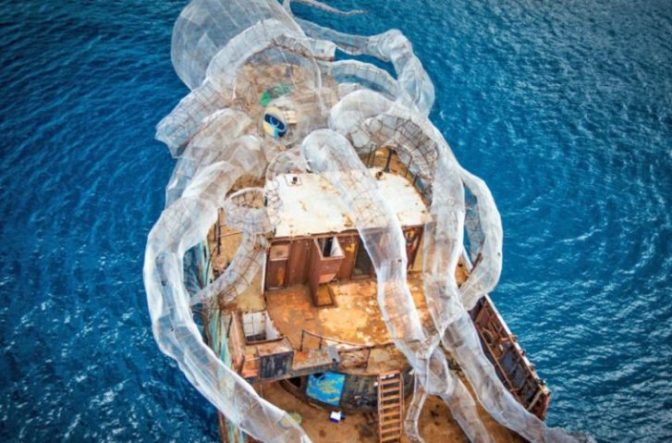 In mid-April, a group of artists, entrepreneurs, environmentalists, and locals gathered on the shore of Virgin Gorda in the British Virgin Islands. They watched the Kodiak Queen, one of the surviving boats from the 1941 Pearl Harbor attack, submerge beneath the water’s surface, eventually sinking to the bottom of the ocean.

Four months prior, artist group Secret Samurai Productions had transformed the ship into an interactive dive site, devoting themselves to cleaning the boat and then turning it into an underwater installation whose main spectacle was monstrous kraken made out of metal rebar and steel. Featuring 80-foot tentacles, its uses the same metal frames that form the foundation of artificial reefs.

Once completed, the octopus completely encompassing the stern of the WII warship, the group lugged the artwork to sea, where onlookers watched it sink to the bottom of the British Virgin Islands.

Divers will soon be able to explore the ship, called the BVI Art Reef, which is now the world’s largest underwater art installation. But the site wont just act as a tourist destination for divers. It will also serve to bring attention to the region’s falling coral reef populations.

This living art doubles as a concerted conservation effort at the bottom of the ocean, serving as a new artificial reef that provides a foundation for corals and sponges to grow upon and a home for fish such as threatened goliath groupers to live in.

The ultimate goal of the BVI Art Reef is to “mobilize a global network of researchers, philanthropists and artists to solve marine health problems through the Power of Play.”

Once we were on the ground in the BVI doing this build, half the people who walked by, James says, “just looked at us and asked, ‘What the heck are you doing?’’ But as it started to come together, James says, “we had tremendous support from the government and locals—young schoolchildren came by to pain their names on the ship, and one woman, who learned that the proceeds would go back to children’s swim education, offered to cook for our team.

The sunken ship is adorned with “an emerging technology called environmental DNA, or eDNA, to collect data on the entire marine ecosystem around the vessel.”

With the project now completed, its organizers have begun working with local BVI dive operators to make sure divers submit a $10 donation that will go back into marine health research and children’s swim education.

“We had this fun, wacky idea to catalyze play and joy to unite people around a project that would touch on a number of different challenges in the BVIs,” says James.

Though it required an in-depth networks of organizations and actors to make the project happen, “the whole purpose is that eventually all the people who put this together will be forgotten, and the new life and economy the reef will create will remain.”