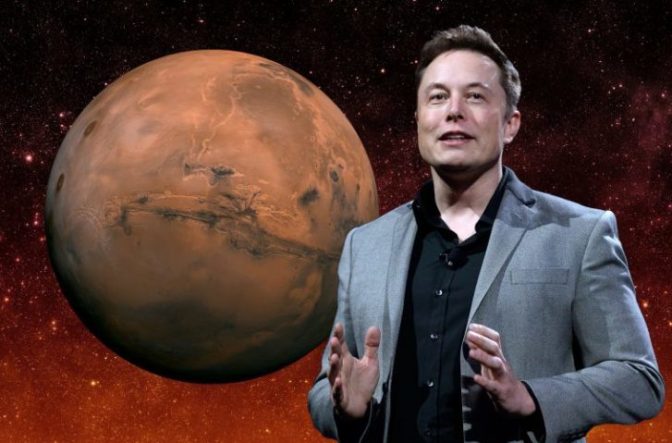 Billionaire tech entrepreneur Elon Musk has made a career of shaking up people’s idea of what is possible, from claiming that we’re probably living in a video game to Mars being capable of human inhabitance and more.

The latter statement is abuzz right now, with Musk saying his space transport company, SpaceX, will construct a rocket system that can transport people to Mars, and support a permanent city on the planet.

“It’s something we can do in our lifetimes,” he announced in a speech at the International Astronautical Congress in Guadalajara, Mexico, which was streamed online and viewed by over 100,000 people. “You could go.”

Musk wants to reduce the current cost of getting to Marks from $10 billion per person to about $200,000 by using “traditional methods.” He noted that the total cost for SpaceX to build the transport system from Earth to Mars could be $10 billion, and that the entire project would cost much more than that. He believes a public-private partnership may be required for the project to happen.

While the Hawthorne company is only spending less than 5% of its resources on the Mars system, Musk says that in a year and a half to two years, SpaceX could be working on the project — putting in $300 million a year toward its completion.

Before the speech, titled Making Humans a Multiplanetary Species, Musk tweeted that the rocket booster for the project will likely measure 39 feet in diameter, while the spaceship will come in at about 55 feet in diameter. When stacked on top of each other, the two create a combined total height of about 400 feet, which is taller than the Saturn V rocket that brought Apollo astronauts to the Moon in the 1970s. The SpaceX rocket would also have almost four times the amount of thrust.

Musk hopes to send at least a million humans to Mars to establish a self-sustaining city, and believes this can be done within a decade. According to the entrepreneur, four requirements for a new rocket fleet are needed for it to travel to Mars about every two years, during the time when Mars and Earth come closest to each other. These include: full re-usability, the ability to refuel in orbit, the ability to produce fuel on Mars, and determining the right propellant. Musk believes it is possible to produce a methane fuel on Mars since it is mainly made up of carbon dioxide, and previous missions have discovered ice there.

But who knows, maybe we will be using other advanced technology by then?

Perhaps the most incredible aspect of Musk’s speech, however, was a video simulation of the giant spacecraft and rocket, which gives people a lasting image of what could be: life for humans outside of planet Earth.

A very rich man, Musk claims that his only reasoning for accumulating personal wealth is to make life multi-planetary. On-stage, he asserted there are two paths in the future for humanity: either reside on Earth and fall subject to extinction, or colonize other planets. He believes Mars is the best bet for the latter option, since it is not only close to Earth, but also shares similar characteristics.

Tuesday’s speech, however, comes just a month after a SpaceX Falcon 9 rocket exploded on a launch pad in Florida during fuelling prior to a typical pre-launch test. Last week, a preliminary investigation declared that a “large breach”  in the helium system of the rocket’s second-stage liquid oxygen tank was to blame.

Check out Musk’s full speech on Tuesday below:

Other CE Articles Regarding Mars & What’s Going On Up There: