This is What the Establishment Fears: Watch Black Lives Matter & Trump Supporters Come Together 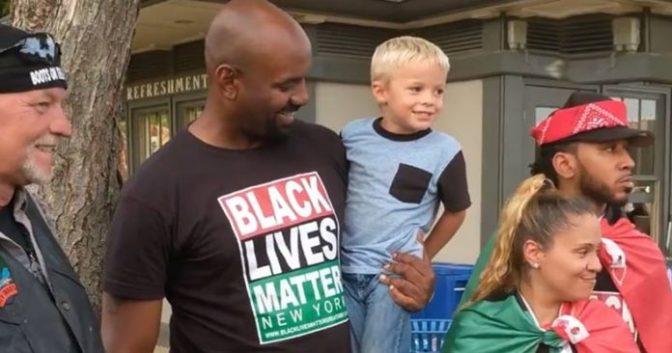 People are resisting the divide and conquer propaganda and this video of Black Lives Matter and Trump supporters coming together shows how to do it.

Washington, D.C. — Over the weekend, in Washington, hundreds of Trump supporters gathered for the Mother of All Rallies event to praise their leader in the white house. Naturally, there were some folks there to counter-protest — nine Black Lives Matter activists to be exact.

This counter-protest began just like all the counter-protests before, people gathered around and began shouting in faces. “You don’t like this country, you leave!” shouted one man, repeating the ill-thought-out, yet often repeated, asinine talking point — implying that people who criticize the government, should leave instead.

The Black Lives Matter members remained militant and did not stand down as they chanted “black lives matter!” over and over, while Trump supporters encircled them.

As the hostile crowd began to surround the small group of Black Lives Matter protesters, event organizers on stage told them to back off and come back to the stage — albeit they did it in the most offensive way — saying, “don’t give them the spotlight. They don’t exist.”

But, like every other human on this planet, they do exist. And in order for all of us to coexist, we must be at peace. We don’t have to like each other, we just have to not be violent toward one another.

Shortly after reigning in the Trump supporters back to the stage, instead of simply insulting the Black Lives Matter activists further, the organizers did something entirely unexpected — they invited them to speak.

Rally lead organizer Tommy Gunn told the Trump fans that the BLMers would have two minutes to speak.

“What we are going to do is something you’re not used to,” Gunn told the BLM activists. “We’re going to give you two minutes of our platform to put your message out. Whether [people in the crowd] disagree or agree with your message is irrelevant. It’s the fact that you have the right to have the message,” he said as the crowd cheered.

Hawk Newsome, the man at the forefront of the small BLM outfit acknowledged this respect and then took the mic and proceeded to mend a growing violent rift that has been forming in this country far before the divisive Trump came into office. Despite the occasional outburst from the obstinate peanut gallery, Newsome was allowed to explain the Black Lives Matter point of view to the Trump supporters.

“I am an American!” Newsome said after introducing himself. “And the beauty of America is that when you see something broke in your country, you can mobilize to fix it!”

“So you ask, why there’s a Black Lives Matter?” he said. “Because you can watch a black man die and be choked to death on television, and nothing happens! We need to address that!”

Some folks in the crowd didn’t take to kindly to that statement. Referring to the murder of Eric Garner by the NYPD, some of the pro-Trump crowd began calling him a “criminal,” as they attempt to justify a father’s killing. However, Garner was merely accused of selling loose cigarettes. Those who would justify a man’s execution over untaxed cigarettes are no friend of a free society — luckily there were only a few of them.

“I am a Christian!” Newsome said, before destroying the hypocrisy of hatred toward people from other countries. “I don’t think my Bible is any different from yours when it says, ‘Love thy neighbor!’ It didn’t say that neighbor had to be from the continental United States!”

Despite making some of their heads explode with his stand based on logic, Newsome continued and the crowd became even more supportive.

“The reason why we fight is to draw attention to issues and to fix it!” he yelled. “We are not anti-cop! We are anti-bad-cop! We say, if a cop is bad, he needs to get fired! Like a bad plumber! Like a bad lawyer! Like a bad fuckin’ politician!”

“We don’t want handouts!” he said. “We don’t want anything that’s yours! We want our God-given right to freedom, liberty, and the pursuit of happiness!”

All of the sudden a heckler in the crowd then began to chant “All Lives Matter!” But Newsome remained unphased answering back. “I’m going to leave you with this and I’m gone,” he said. “All lives matter, right? But when a black life is lost, we get no justice. That’s why we say, ‘Black Lives Matter.’”

At the end of the speech, Newsome was approached by many open-minded Trump supporters who offered their praise. Some of them even wanted their kids to take pictures with Newsome. As of this morning, the video below had over 30 million views, proving that this is what people want — peace.

And that, ladies and gentlemen, is how progress is made when people are not assholes to each other.

Once the Trump supporter saw that Newsome and his crew wanted the same things as them, “freedom, liberty, and the pursuit of happiness,” they had no reason to shout in each other’s faces. Peace was achieved.

Sadly, however, there are still folks out there who buy into the establishment’s divide and conquer propaganda and shortly after this video of Newsome went viral, some people felt the need to decry his peaceful actions.

Both BLM New York and BLM DC disavowed Newsome for doing what he did.

FYI: The group "BLM NY" aka "BLM Greater NY" is not affiliated with our chapter or the #BlackLivesMatter Global Network.

@BLMGreaterNY is NOT part of @Blklivesmatter and does NOT share our principles, politics, or values. https://t.co/y0lsH62sAS

Fortunately, however, judging from the complete lack of engagement in their tweets, not very many people share their sentiment.

The establishment’s program of divide and conquer is powerful, but peace and love are even stronger. So, as corporate media blasts photos and videos of Antifa battling white supremacists and Trump supporters, telling you that there is a race war brewing — remember that they are the ones brewing it — all to keep you from looking up at the real war taking place on humanity, 24 hours a day, across the globe, carried out by sick people who loathe the fact citizens are refusing to hate each other.

This Is What Happened When Black Lives Matter Activists Were I…