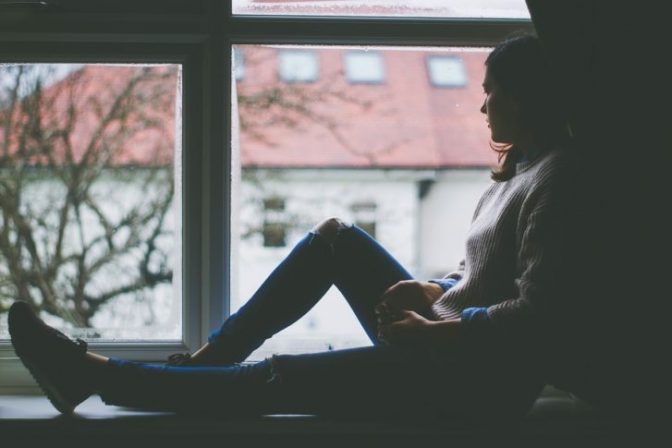 Grey. Heavy. Confusing. Unbearable. These are just some of the words people who suffer from depression feel. But there are so many other words that I, myself, cannot even begin to fathom, because no one person’s depression is like another’s.

I remember speaking with someone when I was going through a tough time in my life about how I was feeling, and felt comfort in knowing they felt much of the same things I did. That they used words like grey, heavy, confusing, and unbearable. But they also said a lot of words that I could not resonate with.

It’s interesting that depression often leaves people feeling so alone. There is a lot of “I” or “me,” but rarely is there “we.” And yet, depression is something that we, as in so many people around the world, experience, though this fact doesn’t offer a lot of unity.

Writer Andrew Solomon’s TED Talk, Depression, the Secret We Share, explores his, as well as other people’s, depression — the darkness, the many questions, the various ways to heal, the forms of relapse, and the way learning about it, and about yourself, can be the best tool for moving forward. He notes that the opposite of depression is not happiness, but vitality. The way he puts it hits so close to home. When I was in a dark place, I would force myself to be in public, at a restaurant, trying to eat and laugh like everyone else. But I couldn’t. I didn’t want to be happy, I wanted to want to eat. I wanted to want to talk to other people. But I couldn’t.

“I found myself losing interest in almost everything. I didn’t want to do any of the things I had previously wanted to do, and I didn’t know why. The opposite of depression is not happiness, but vitality. And it was vitality that seemed to seep away from me in that moment. Everything there was to do seemed like too much work. I would come home and I would see the red light flashing on my answering machine, and instead of being thrilled to hear from my friends, I would think, ‘What a lot of people that is to have to call back.’ Or I would decide I should have lunch, and then I would think, but I’d have to get the food out and put it on a plate and cut it up and chew it and swallow it, and it felt to me like the Stations of the Cross.”

Solomon’s depression led him on an eye-opening journey across the world to interview others with depression. And so he learned to ask questions that would ultimately lead him to realize people need to talk; they must talk.

One thing I have noticed about depression is that there is not a cure-all. But the way Solomon posed certain questions really elevates this. He wondered if the medicine he ultimately ended up taking for his depression was making him more himself, or into someone else? He also questioned whether it’s a chemical problem or a psychological problem. “And does it need a chemical cure or a philosophical cure?”

Understanding depression is complex, perhaps because we confuse it with other things like sadness and grief. This idea made Andrew wanted to understand it even more, and so, for his own sake, he chose to reach out to other people to see what it is that causes more people to be more resilient than other people.

“And I discovered, as I talked to depressive people, that they have many delusional perceptions. People will say, ‘No one loves me.’ And you say, ‘I love you, your wife loves you, your mother loves you.’ You can answer that one pretty readily, at least for most people. But people who are depressed will also say, ‘No matter what we do, we’re all just going to die in the end.’ Or they’ll say, ‘There can be no true communion between two human beings. Each of us is trapped in his own body.’ To which you have to say, ‘That’s true, but I think we should focus right now on what to have for breakfast.’ “

Perhaps one of his most poignant points is his depressive epiphany that accepting depression, dare I say, “loving” your depression, can work for you much more than you think.

“And what I came up with over time was that the people who deny their experience, and say, ‘I was depressed a long time ago, I never want to think about it again, I’m not going to look at it and I’m just going to get on with my life,’  ironically, those are the people who are most enslaved by what they have. Shutting out the depression strengthens it. While you hide from it, it grows.And the people who do better are the ones who are able to tolerate the fact that they have this condition. Those who can tolerate their depression are the ones who achieve resilience.”

If people learn to value depression, maybe it will make the weight of it seem a little more bearable. It may not prevent a relapse, but taking away its fearful powers could make way for even the idea of a relapse to be more tolerable.