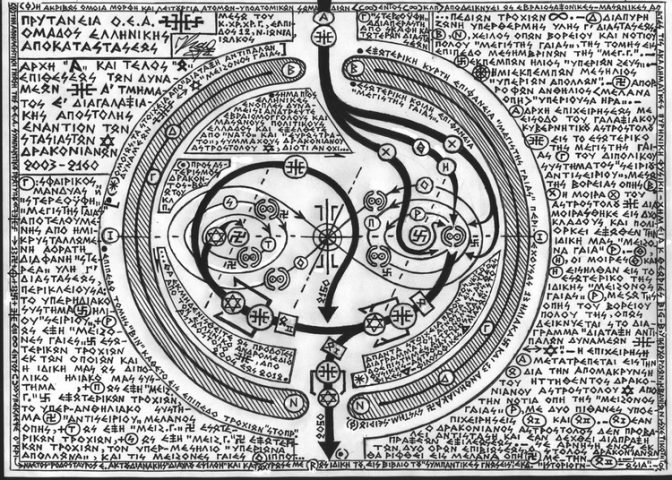 As far as conspiracy theories go, one of the more interesting ones we’ve happened to stumble upon is the Hollow Earth Theory. The Hollow Earth Theory suggests that Earth is entirely hollow or otherwise contains a substantial interior space, which some believe may be inhabited by other beings. Originally theorized back in 1692 by the English astronomer, Edmund Halley, of Halley’s Comet fame, he suggested that the Earth was hollow, and within it was a second sphere with another magnetic field similar to our planet. His final proposition was that Earth was actually composed of four spheres, all nestled inside another.

Halley also suggested that the interior of the Earth was populated with life and lit by a luminous atmosphere. He thought the aurora borealis, or northern lights, was caused by the escape of this gas through a thin crust at the poles.

According to Wikipedia: Instead of saying that humans live on the outside surface of a hollow planet — sometimes called a “convex” hollow-Earth hypothesis — some have claimed humans live on the inside surface of a hollow spherical world, so that our universe itself lies in that world’s interior. This has been called the “concave” hollow-Earth hypothesis.

If this sounds bizarre, just wait, it gets even weirder. According to How Stuff Works, Halley’s theory took another life of it’s own through another researcher, John Symmes, stating:

In the early 19th century an American eccentric, John Cleves Symmes (1779-1829), sought funding for an expedition to enter the Earth through one of two 4,000-mile wide polar holes. Inside the Earth, he was convinced, a benevolent advanced civilization existed.

Though an object of derision to most people, some took him seriously, and the idea of a hollow Earth was championed in a number of books throughout the rest of the century and right into the next.

Today, hollow-earthers believe flying saucers zip in and out of the polar holes. The people inside are descendants of Atlantis and its Pacific equivalent, Lemuria.

There is even a strong Nazi wing of the movement. According to Canadian neo-Nazi Ernst Zundel, the principal advocate of this theory, Hitler and his elite troops escaped with their saucer technology into the hole at the South Pole.

Flying saucers, Nazis, and advanced civilizations? Sounds like something out of a movie, or, perhaps what the television show Lost was inspired by.

Check out the video below to explore The Hollow Earth Theory further and see how it resonates with you. Whatever the case may be, it’s a fascinating theory none-the-less.