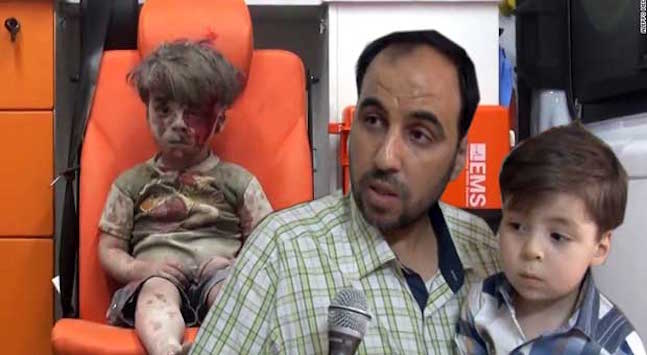 So when an image of a 5-year-old Syrian boy with a stoic glance sitting in an ambulance, caked in dust and blood, becomes the front page of several national newspapers, the pain of war becomes more tangible.

But the child, Omran Daqneesh, didn’t ask for such infamy. And he certainly didn’t deserve headlines that didn’t speak his truth.

Mass media conjured up its own narrative to support the United States’ stance on the need for regime restructure, and in the making, lied about what actually happened to Omran — claiming the boy had escaped a deadly airstrike or missile by seconds that had been launched by the forces of Syrian President Bashar al-Assad or their allies from Russia.

Omran’s father, Mohamad Kheir Daqneesh, made it very clear that the enticing story media created was simply that: a story.

“We did not find out how the incident happened,” said Mohamad to reporter Kinana Alloush and others in interviews. “I pulled my family members out of debris. Omran was with me, while White Helmets took him away and started taking photo of him.”

Upon reviewing the footage, you can see Mohamad’s account come to life, as the boy is passed between the arms of his rescuers from a building in Aleppo. A man in a yellow vest holds him tight, the boy wrapping his right arm around the man’s shoulder as he rushes him to the waiting ambulance.

He’s placed on an orange seat, and stays there not making a sound, barely blinking. In a moment the man who carried him in bends down to get a walkie talkie and then disappears. Then another man with a camera focuses on the boy. You see the boy blink and look away.

Fighter jets or a missile didn’t precede the blast that killed Omran’s 10-year-old brother, said Mohamad. But the media didn’t care what the truth really was, only that they had their face of war. Meanwhile, Mohamad shaved the boy’s head and hid him from distressing media attention, rebel fighters, and sympathizers.
The father was urged to succumb to the narrative that Assad was responsible for Russians bombing the neighbourhood, with journalists allied with al-Nusra Front — also known as Fatah al-Sham or Levant Liberation, an offshoot of al-Qaeda — offering sizeable sums. Mohamad refused. It wasn’t true, and it wasn’t the right thing to do.
Did it matter that Mohamad supports the rule of Assad? Such truth was to be avoided, ignored, as it didn’t fit the bill of what the U.S. hoped to accomplish.
Omran suffered minor injuries, but was given head bandages to boost the narrative of him being the poster child for war.

“He only sustained minor injuries, but the militants exaggerated this fact. They said on numerous occasions via their media that he died, until finally admitting that he’s alive. They are not to be trusted,” explained Mohamad. “While I was rescuing my family the militants filmed my kin getting out of the house, in order to use these images for propaganda… I never had any dealings with their organizations and I never accepted their so called humanitarian aid.”

Omran cannot be the face of Syria just because he is Syrian, but a camera catching his disheveled shock made it clear that his reality didn’t matter. Propaganda always wins.

And should Omran be the face of anything, let him be the face of not just what war looks like, but the urgency for war to end, because while it is impossible to ignore the horror created by Syrian and Russian forces, it is equally so to turn a blind eye to Western and American complicity.