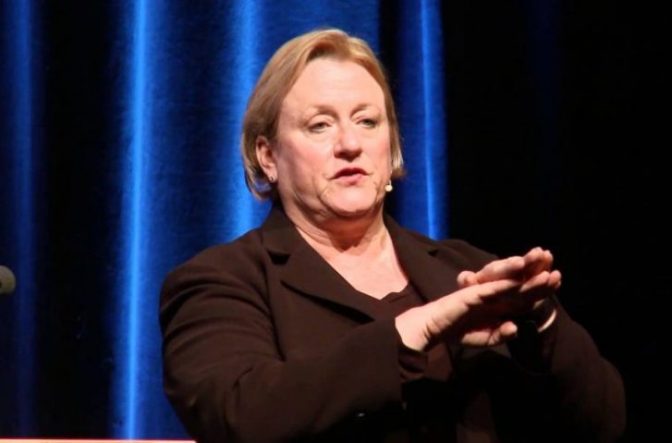 Former managing director and member of the board of directors of Wall Street investment firm Dillon, Read & Co., as well as former Assistant Secretary of Housing and Federal Housing Commissioner in the Dept. of H.U.D. during the Bush 41 administration, Catherine Austin Fitts infamously blew the whistle on bankers, claiming they buy out all the real estate assets with money they stole from their clients. She once even revealed that she discovered one block in San Diego that had lost 20 million dollars in HUD loans made on properties that never existed and did not even have postal street addresses.

Fitts also created the Community Wizard program to help voters see just how much federal money was being spent in each zip code to make way for better control of government spending. Her action was met with a lawsuit. She was investigated 18 times and eventually run out of Washington, DC.

Fitts is also known for her series called Narco Dollars for Beginners, which involves about 17.3 billion dollars (at a rate of 4 billion dollars a week for 4.3 weeks) being stolen from unaudited government spending, of which Fitts blamed it on the narcotics trade.

Of her political demise, Fitts said:

“One day I was a wealthy entrepreneur with a beautiful home, a successful business and money in the bank. I had been a partner and member of the board of directors of the Wall Street firm of Dillon Read, and an Assistant Secretary of Housing during the Bush Administration. I had been invited to serve as a governor of the Federal Reserve Board and, instead, started my own company in Washington, The Hamilton Securities Group. Thanks to our leadership in digital technology, financial software and analytics, Hamilton was doing well and poised for significant financial growth.

The next day I was hunted, living through 18 audits and investigations and a smear campaign directed not just at me but also members of my family, colleagues and friends who helped me. I believe that the smear campaign originated at the highest levels. For more than two years I lived through serious physical harassment and surveillance. This included burglary, stalking, having houseguests followed and dead animals left on the doormat. The hardest part was the necessity of keeping quiet lest it cost me more support or harm my credibility. Most people simply do not believe that such things are possible in America. They are.”

But despite her setbacks, Fitts focused on moving forward, and is now an active voice in economics and the U.S. & world political systems.

After a tumultuous and confusing 2016 U.S. presidential election, a huge topic we can no longer ignore has arisen: how will we escape what we know to gain what we need? The systems are corrupt, the people in power are corrupt, and the public is left brainwashed while a country, and ultimately, the world, suffers as a result.

In an interview, Fitts brought up so many intriguing points, pondering the question of how the government expects people to pay their taxes if the government is no longer viewed as legitimate. The world economy is set up for failure because of a banking system that relies on taking users’ money in order to pay usury each time a transaction occurs. This can ultimately result in citizens being brainwashed into believing they need a global currency that’s managed by the global elite.

For quite some time now, there have been clear warnings that have slipped through the cracks of mainstream media regarding the demise of the dollar. Now, Fitts says that warning is coming to a head, claiming that the economic collapse may be right around the corner.

The financial crisis of 2008, in which the government hindered a collapse of systems by working with chiefs of the financial sector by giving them incomprehensible bailouts, then inflating the dollar through quantitative easing, has now, eight years later, reached its limit.

“It’s going to be extremely difficult to get people to continue to pay their taxes when they’re highly confident the money’s not being spent legally and it’s going to the advantage of small parties or things that they don’t understand. And so you can’t move further without institutional overhaul,” said Fitts.

Fitts harps on the danger of groups within the U.S., like ALEC, who are already urging for law changes and constitutional convention that would throw out these institutions.

“If you want to enforce the Constitution or fix things, that’s what you do. The reason you get a Constitutional Convention is you want to tear it up because you’re worried, now that people realize the extent of the corruption, that they’re going to try and enforce.”

We are living in a time where corruption reigns supreme, and the only good side of that is that the smell is so strong, we can no longer ignore it. We are being forced to wake up to the corruption of our government and financial rulers, as well as the elites who are working tirelessly to demolish the middle class. But the more the reality is discussed, the more likely we will get closer to watching the people who put so many down finally be faced with the karma of their crimes.