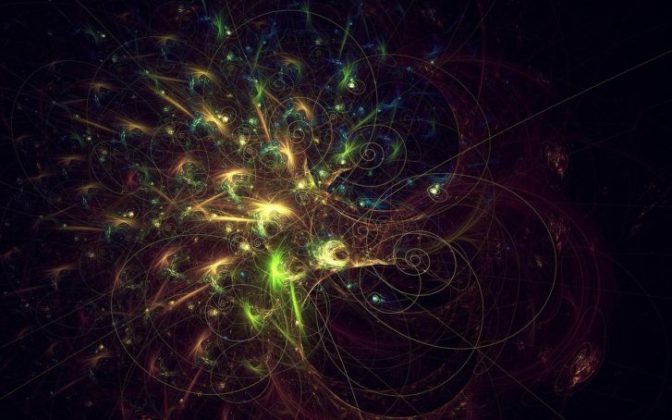 The text below is part of a talk I was to give recently at Gratitude Migration. Interestingly enough, as life tends to imitate art (and the microcosm mirrors the mind) unfortunately due to a chaotic circumstance – I was unable to attend the event, and missed being able to give this “speech”.
I feel now, more than ever, the text below is of value – and I hope the words resonate with each of you. We are living amidst chaos, and looking for order, even through the density we all feel no matter where we stand politically, or spiritually.
In taking a cosmic perspective, and finding the light through the darkness, and the beauty of the “burn”, we can find hope in the bigger picture.

Finding Order in Chaos
by Jennifer Sodini
Floating through a cosmic sea of stars, black holes, asteroids, and anomalies – here we are. Billions of human beings making our way through space and time on a big blue planet that just-so-happened to have the right combination of elements to sustain life…organized chaos, within a chaotic universe.
From a macrocosmic perspective – the fact that we are here now is nothing short of miraculous. Yet, within our mainstream microcosm, the miracle of life can become muted and mundane.
So many have become conditioned to believe that somehow the meaning of this life is to move from cradle to educational institution, institution to corporation, corporation to retirement, and retirement to coffin…living a numb life, as a cog in a machine, working to hit deadlines, meet quotas, and pay the bills. “But…”, and “I can’t” are words that seem to encompass the collective. Dreams are saved for sleep, which more often than not, we aren’t able to get enough of.
However, according to (almost) every ancient text – everything was created from nothing, and from that nothing emerged this incredible infinite universe we are a part of. And, how did it begin? “The Word”.
Now, from a purely metaphorical perspective – in a sense, the cultural numbness is a “nothing” in its own right…but, more like “the nothing” from The Neverending Story.
And, if we look at the words, and actions that form our reality, the language seems to perpetuate this nothing. Each “But…” is but a black hole…and each action…a ripple in time and space.
It is our time to find something in the nothing, to find order in the chaos. And how do we do this? By creating.
You don’t have to be an artist to do this, you are a part of the universe, and your very nature is creativity. Whether you’re creating a cup of coffee, a baby, an iPhone app, a legal brief, a painting or a poem – you are using your mind to manifest something outside of yourself, that before only existed in your imagination. A simple perspective on something so incredibly complex, yet with this mindset you can begin to mould your reality…instead of waiting your way through an existence, create what you wish to experience. Allow “I can” to replace “I can’t”, no more “I wish” – instead “I will”.
Metaphorical black holes, asteroids, and anomalies will still present themselves when we least expect it – but if we connect to the creativity that lives within each and every one us, there we find the order amidst the chaos…and each little ripple creates a bigger wave.