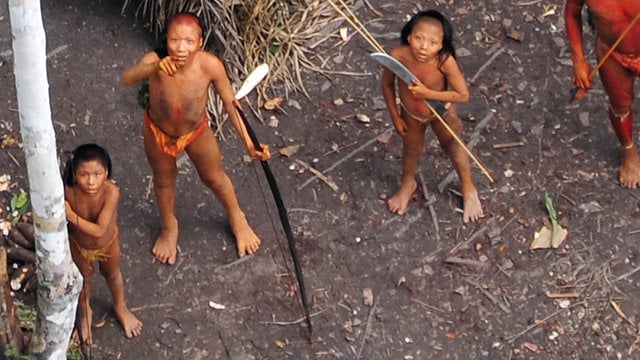 The video below contains extraordinary footage of one of the world’s last uncontacted tribes.

One can’t help but feel complete fascination with the notion that there are still tribes left on the planet that have yet to have contact with the outside world. For these uncontacted tribes, the idea of people of different races, airplanes, modern technology, etc. is equally as foreign as the idea of extraterrestrials, and UFOs may be to us. Our way of life is completely alien to them, such as our way of life would be alien to a higher intelligence, and so on and so forth.

Unfortunately for these indigenous Amazonians, life as they currently know it is under threat, and contacting these individuals to try to bring into our “way of life” is not necessarily for the better. As the official website for Uncontacted Tribes states:

If they are contacted, they can have the benefits of ‘our’ way of life:

They won’t get the chance. In reality, the future offered by settler society is to ‘join’ at the lowest possible level – often as beggars and prostitutes. History proves that tribal peoples usually end up in a far worse state after contact, often dead.

The thing is, reality is subjective to the reality lived by the individual. Who are we to say which way of life is correct, and which way of life is wrong? How can we be so bold as to say that leaving the Amazon, and trading in the simple, peaceful, community based way of life for the complicated, isolated, money driven existence we live in the modern day world is the way to go? The ego we have as a collective is so outrageous to even think to challenge or disrupt their way of life, and is a very sad prospect.

A documentary comes to mind, named Pururambo, where an “explorer” of sorts goes on an expedition to find uncontacted tribes from New Guinea that have never come in contact with white people, and have changed little since the Stone Age. While seemingly “primitive” to the explorers, in time, the explorers begin to empathize with the way of life of the natives, and begin to question the lifestyle we have “chosen” to “evolve” to. Unfortunately, the end for these tribes was not a happy one. Missionaries came soon after the explorers had contact with the tribes, showed them videos of the crucifixion of Jesus Christ, and changed their hearts, lives, and spirit forever. These peoples, like the uncontacted tribes in the Amazon, were/are better left alone, to live their lives the way they see fit, and to be protected, not destroyed.

Unfortunately, greed and the continued disrespect of the Earth and it’s resources threatens their existence, as oil workers and illegal loggers invade their lands. However, you can help try and prevent the further destruction of the Amazon/protect the natives by signing a petition by clicking here.

Much as contact with these tribes is a very slippery slope to walk upon, just think about how contact with higher beings for us would be? It would challenge our current social and religious paradigms, cause social chaos/disruption, and threaten our very way of existence. Perhaps UFOs to us, are the same as airplanes to them, and we, like they, are also being monitored with the question of contact still being “up in the air” (no pun intended) because of OUR primitive nature. As we view tribal way of life as primitive, at least it is community based, and in seeming symbiosis with their environment, nature and people, When you look at our current way of life, with war, greed, worship of celebrity/false idols, mass consumption, laziness, violence, working in tiny cubicles 8 hours a day/5 days a week barely making ends meet, obsession with technology/social media, vanity, viewing the planet as collateral damage to continue to fuel the fires of desire, and the belief that we are somehow separate from one another, would seem BEYOND primitive and completely archaic to a higher intelligence. So again, I ask of you, which way of life is right and which way of life is wrong? Again, who are WE to judge?