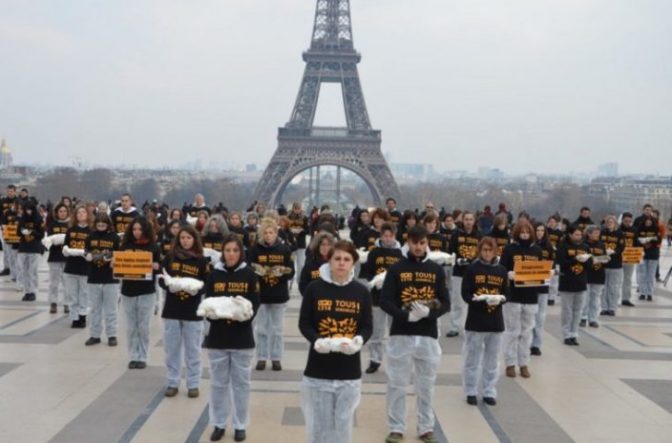 In a landmark win for animal rights, the French national assembly recently passed a bill that will require all French slaughterhouses to be equipped with CCTV cameras. The move came in response to an incredulous public outcry following a slew of disturbing undercover investigations released by the French media by the local animal rights organization L214.

The law, which will go into effect  in 2018, represents a groundbreaking crackdown on slaughterhouse practices and workers, known for animal cruelty, hygiene violations, and various other abuses. The bill passed 28 to 4.

Last September, France’s National Assembly issued a report suggesting 65 measures to improve the “transparency and the inadequate controls” at French slaughterhouses. Implementing CCTV cameras and ensuring more qualified veterinarians at the facilities were among the top proposals listed.

Several videos released exposed “violent and sadistic” practices by slaughterhouse staff, including workers punching and hitting sheep, throwing a lamb at a wall, decapitating a cow, cutting throats, hanging cattle by the legs, and more.

The well-respected L214 has garnered a reputation in France for their controversial, hard-hitting undercover investigations that expose the reality of animal cruelty, taking it beyond what many people assume is happening, and exposing unfathomable shocking incidents.

Though the bill will not go into effect until 2018, if it clears the senate vote in March, there will first be a trial run in July 2017 that will see cameras installed in 263 French slaughterhouses, in areas where all animals are “moved, held, immobilized, stunned, and killed.”

This is not only a victory for animal rights activists, but slaughterhouse workers as well, as they are regularly exploited by the animal agriculture industry. Not everyone is pleased with the bill, however. In fact, higher ups in the French animal agriculture industry retaliated by “dumping truckloads of manure in front of ministries, blocking traffic with trucks, burning tires, and hanging [dead] pigs from highway overpasses.” And French Minister of Agriculture Stephane LeFoll voiced concern that “respect for slaughterhouse workers” would be affected by the bill, and therefore it should not go live in the foreseeable future.

It’s hard to justify LeFoll’s concern, however. In the United States, there is a 95 to 100% turnover rate of factory farm jobs. Seventy percent of workers suffer respiratory conditions as well. Tyson Foods, for instance, was found to have routinely denied workers bathroom breaks, leading to many of the employees wearing diapers. The arguments raised by the French animal agriculture industry seem a feeble attempt to protect itself from the repercussions that are sure to ensue once the reality of slaughterhouses is exposed.

France’s new bill would also include “an independent commission, a national slaughterhouse ethics committee and comes loaded with stiff penalties for animal cruelty violations — 6 to 12 months of prison and fines from 7500 to 20,000 Euros ($8000 to $21,000).” It’s similar to one passed in Israel that opted for implementing cameras and video recorders in all slaughterhouses by the end of 2016.

Animal rights protests have become more prevalent across Paris, Nice, and Lyon, putting France in the spotlight as one of the leading countries to support animal rights and recognize the protection of animals as an essential part of environmental efforts to limit climate change.

Let’s hope the bill prompts a much needed change in the treatment of both animals and workers.