Free Energy: We Are on the Brink of Unlimited, Self-Sustaining Clean Hydrogen Fuel 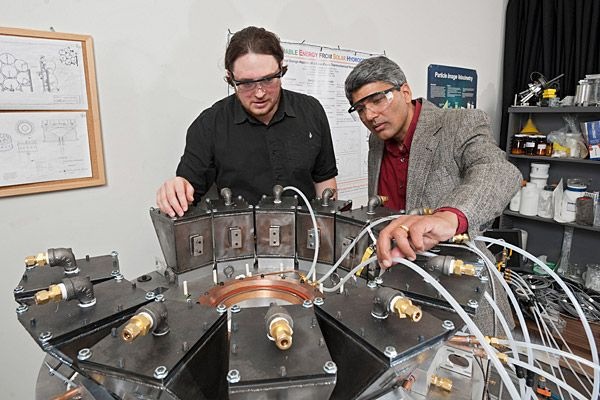 We are now seeing some impressive developments in Free Energy technologies in the area of creating unlimited, self-sustaining, emission free hydrogen fuel created from water.

The power structures must be aware that with all of these new technologies and all the “open source” movements around the globe, that the days of the big oil and energy companies are numbered. And with all the investments the world’s largest banks have in these companies this may just bring down the whole “elite” power structure.

What will our planet look like after every human being around the world is provided access to free energy? This transformation will have the greatest impact on this planet than anything we’ve ever seen. It will solve the energy crisis and the biggest pollution problem we have with carbon emissions and air quality. This will also provide access to the basics like clean drinking water to all of the poverty stricken villages and communities.

So we have much to be excited about as we are about to see the greatest technology ever to be released to the public. These are recent developments in just the “Hydrogen Fuel” arena but as you may know there are several more ideas in the works to produce free energy especially in terms of quantum physics and quantum mechanics.

Here are some clips from recent articles on hydrogen fuel along with links to those articles:

“Hydrogen is a fuel that has seemingly limitless potential, but scientists have only been able to produce it from fossil fuels, like natural gas. That is, until now. A doctoral student in mechanical engineering at the University of Delaware has designed a new type of reactor that produces hydrogen using nothing more than concentrated sunlight, zinc oxide, and water. And best of all, the zinc oxide used by the reactor can be reused, meaning that once the reactor is up and running, it would be self-sustaining…”

“By using the ambient terahertz radiation in the enviornment it is possible to make hydrogen fuel from water by reacting ultrasound with zinc oxide.  Terahertz is non-ionizing radiation produced by re-radiated earth heat, water flowing, and living things. The new material that makes terahertz into ultrasound is a mixture of carbon nanotubes and rubber-like polymers. It is at the magazine Spectrum IEEE.  By making it as shown it will produce hydrogen fuel from the ambient enviornment TERHERTZ RADIATION—> ULTRASOUND+WATER+ZnO= HYDROGEN GAS”

My New Invention: Hydrogen from Water

“The new invention which under U.S. patent law I declare to be public domain and open source creates hydrogen from water in a practical on-demand setup.
The method is an ultrasound emitter sends 43,000 cps ultrasound (close to the Keely water frequency) into a mesoglass in the shape of a cone. The mesoglass is composed of small beads of zinc oxide.  The ultrasound emitted into the base of the cone sets up regions of phonon (sound energy) concentrations known as Anderson Localizations.  These intense regions created by the wave interference of the disordered mesoglass cause violent smashing of the water molecules into hydrogen and oxygen gas.  This allows for low energy practical use of hydrogen gas from water.  It allows water to be used as fuel.  Much more efficently than electrolyisis.”
LINK TO ULTRASOUND ZINC OXIDE HYDROGEN PRODUCTION
http://www.newscientist.com/article/dn18661-crystals–sound–water–clean-hydrogen-fuel.html#.U3NsG1f3Hj4

The sports car that runs on SALTWATER: Vehicle goes from 0 to 60mph in 2.8 seconds – and has just been approved for EU roads

“Sports cars may not have the best reputation for being environmentally-friendly, but this sleek machine has been designed to reach 217.5 mph (350 km/h) – using nothing but saltwater.

After making its debut at the 2014 Geneva Motor Show in March, the saltwater technology has now been certified for use on European roads.

The 920 horsepower (680 kW) Quant e-Sportlimousine uses something known as an electrolyte flow cell power system to power four electric motors within the car.

It works in a similar way to a hydrogen fuel cell, however, the liquid used for storing energy is saltwater.

The liquid passes through a membrane in between the two tanks, creating an electric charge. This electricity is then stored and distributed by super capacitors…”

New Earth Media will continue to follow these recent developments along with breakthroughs in all areas of Free Energy. We are on the verge of an amazing global transformation.

Much Love and Peace to all