Free the Media Free the World 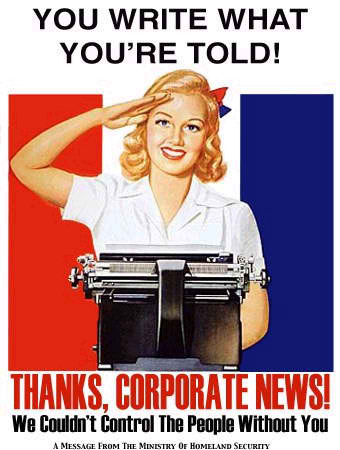 Want to free the world?  Start by freeing the media from the clutches of corporate control.  Here in the United States we are supposed to have freedom of the press.

It is written in the First Amendment to the US Constitution:

“Congress shall make no law respecting an establishment of religion, or prohibiting the free exercise thereof; or abridging the freedom of speech, or of the press; or the right of the people peaceably to assemble, and to petition the Government for a redress of grievances.”

Having said that the truth is 90% of all media in the United States is actually controlled and owned by only 6 Corporations.

In a recent CNN interview by Pier Morgan of Abby Martin of RT.com Abby states the following.

“I think that the real question that should be asked is why do I have to work for RT to tell the truth about corporations and the U.S. government? I mean seriously, you guys are beholden to advertisers that you cannot criticize, and that’s why I work for [RT]…”

Here is a link to that video and worth watching.

The issue at hand is that how is the public supposed to know what is truth, what is being withheld, and what is blatant lies and propaganda?  How can we effectively make our most important decisions in our society going forward when we have no idea where to turn for the truth?

All we see in today’s news is negativity and fear.  Shootings and rapes and killings and all those things that tear a soul apart and have everyone living in fear.  You would think the world was just a horrible place to live if that’s all you did was watch the news.  They glamorize the wealthy and those filled with greed and that lust for power, while ridiculing and looking down upon the poor and less fortunate.

Let’s have a WAR!

They feed the minds of the public in supporting wars that are only waged for profits to the wealthy elite.  Propaganda at its worst having thousands if not millions sent into battle to die so a few could make some money.  And most support these wars because the media shoves it down your throats and tell us if we don’t go into battle we will lose our freedoms (which we no longer have anyway) and we will all die.

The truth is that without the help of the controlled media pushing the Iraqi invasion agenda, this conflict would have never gained any support whatsoever from the American people.

Some may say its conspiracy to believe this war had other agendas such as “invasion for their oil”; establish presence in the Middle East”, etc.  But one fact that is clear is that Vice President Dick Cheney’s company Halliburton made 39.5 billion dollars on the Iraq War.

“The company was given $39.5 billion in Iraq-related contracts over the past decade, with many of the deals given without any bidding from competing firms, such as a $568-million contract renewal in 2010 to provide housing, meals, water and bathroom services to soldiers, a deal that led to a Justice Department lawsuit over alleged kickbacks, as reported by Bloomberg…”

So again here we have false claims of an invasion to save the world from “weapons of mass destruction” (which to this day have not been found) and millions of lives lost and veterans coming back suffering from post-traumatic stress disorder after witnessing the horrors of war and for what?

You guessed it….  MONEY

Media distracts the public with footage around the clock of celebrities such as Justin Bieber and takes you on a journey around his life.  Pitiful that this has become what’s important to the people in this world.

Media is a form of mind control and they manipulate the public to think and act in a specific way. They also use the divide and distract routine of bringing issues of minor importance and blasting them all over the news. Then people will have endless bickering of these issues that don’t really matter in the big scheme of things.  Do people really need to be that concerned with what type of dog the President should buy?

Media would have you believe there is lack in this world and not enough for food and shelter to go around.   That is complete and utter nonsense.

“Hunger is caused by poverty and inequality, not scarcity. For the past two decades, the rate of global food production has increased faster than the rate of global population growth. The world already produces more than 1 ½ times enough food to feed everyone on the planet. That’s enough to feed 10 billion people…”

Media hides many truths about things of great importance that could change our world in an instant like life beyond our planet, free energy and many other breakthrough technologies, Monsanto and GMO’s, chemtrails, the real truth about Big Pharma, and fluoride in our drinking water.

The media has the people believing in the false fiat currency and monetary system, as well as the whole mortgage fraud and “creating money out of thin air” schemes.  And we must pay back this fictional money we borrow that never truly existed PLUS INTEREST. Media tells us this whole system is simply “normal” and we cannot possible believe otherwise.

They’ve been pointing out many great events in our time only to label those things as silly “conspiracy theories” and would have the public make a mockery of any person who would accept these outrageous beliefs as factual. Thanks to media propaganda dating back to the 1940’s, the public to this day still laughs at those who believe in UFO’s and the E.T presence and media makes those people out to be wackos or crazy nut cases.

The importance of these topics is of such great importance that there revelations would transform our world overnight.

Investigative journalism no longer exists as these types of reporters are either threatened or killed like Rolling Stone journalist Michael Hasting.

“He always sought out the hard stories, pushed for the truth, let it all hang out on the page. Looking back on the past ten years is tough for anyone, but looking back on Michael’s past ten years and you begin to understand how passionate and dedicated to this work he was…”Read more: http://www.rollingstone.com/politics/news/michael-hastings-rolling-stone-contributor-dead-at-33-20130618#ixzz33gscaceZ

“His neighbor and close friend, Jordanna Thigpen, told the LA Weekly that just before his death, Hastings’ behavior had become erratic because of his increasing concerned that helicopters commonly seen in the Hollywood Hills were spying on him and that his Mercedes had been tampered with…”

And these reporters were fired for revealing the truth about Monsanto Milk from Fox News in an investigative report.

“FOX News reporters Steve Wilson & Jane Akre uncovered the shocking truth that most of the milk in the United States is unfit for human consumption due to Monsanto’s cancer causing growth hormone, Posilac, known in short as “BGH” “BST” or “rBGH”.

They were both fired shortly thereafter…”

So it’s time to free the world by freeing all media from corporate domination and control.  At New Earth Media we have set up a news that reports the truth, and have journalists that are not told what they can and cannot say and write.  This is one of the most important challenges we face today and until this is resolved in the mainstream, it will be very hard for our world to change for the better.

Some of the most important truths need to be revealed to the world and will point this planet and our destination in a different direction.  A place of abundance, new health technologies and other mind blowing technologies. Reporting issues that matter and are important to today’s world, and stories that are filled with love and compassion, and all things that will move humanity forward.