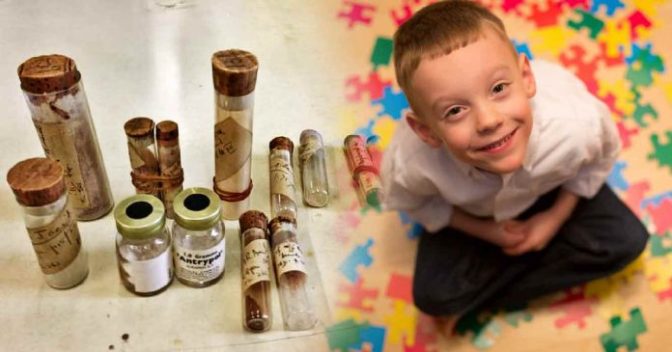 With just a single dose of this 100-year-old drug, autistic children experienced remarkable positive cognitive and emotional improvements. Some of the children spoke their first sentences in more than a decade. This is truly a ‘game changer.’

According to a revolutionary new study, a drug discovered more than a century ago may hold the key to combating the symptoms of autism. After just one dose, parents of the children in the study watched their kids make incredible improvements, with some speaking for the first time.

The study’s lead researcher, Dr. Robert Naviaux of the San Diego School of Medicine is an internationally known expert in human genetics, inborn errors of metabolism, metabolomics, and mitochondrial medicine. He is the discoverer of the cause of Alpers syndrome — the oldest Mendelian form of mitochondrial disease — and the developer of the first DNA test to diagnose it. Naviaux is, by far, one of the most qualified people in the world to conduct this study.

During his research, Naviaux noted the transformative results of the drug suramin which was first developed in 1916 and used as an anti-parasitic drug for treating African sleeping sickness and river blindness. After giving a single dose of suramin to boys with autism, between the ages of five and 14, Naviaux recorded something incredible — their symptoms were significantly alleviated.

“After the single dose, it was almost like a roadblock had been released,” he said. “If the future studies show that there’s continued health benefits, this could be a game-changer for families with autism.”

The study was published in the Annals of Clinical and Translational Neurology. During the study, five children were given suramin, while the remainder were given placebos. Included in the group were four non-verbal children, two 6-year-olds, and two 14-year-olds.

“The six-year-old and the 14-year-old who received suramin said the first sentences of their lives about one week after the single suramin infusion,” Naviaux told the UC San Diego Health website. “This did not happen in any of the children given the placebo.”

One parent, who noted that her son had not spoken a full sentence in more than a decade, said, “Within an hour after the infusion, he started to make more eye contact with the doctor and nurses in the room. There was a new calmness at times, but also more emotion at other times.”

“He started to show an interest in playing hide-and-seek with his 16-year-old brother. He started practicing making new sounds around the house. He started seeking out his dad more.”

Naviaux’s expertise led him to the theory that there is a fundamental metabolic problem in all people with ASD — namely, that cells in affected people experience abnormal levels of something that Naviaux has termed the “cell danger response” (CDR), according to Seeker.

The CDR, Naviaux explained to Seeker, happens when a cell responds to external stressors or toxins. He describes this process as the cell hardening its membranes, ceasing interaction with neighbors, and withdrawing into itself until the danger has passed.

Naviaux believes that the CDR process gets stuck in children with autism, and that it can permanently alter how the cells interact with their external environment. When this happens in early child development, Naviaux believes it results in the development of autism and various other chronic childhood disorders.

The trial aimed to “un-stick” the CDR cycle using an infusion of an old drug called suramin, which was first developed in 1916 to treat parasitic diseases, including African sleeping sickness (trypanisomiasis) and river blindness (onchocerciasis).

Suramin is also the only drug used in humans that can “inhibit extracellular ATP signaling,” Naviaux said, giving cells that are stuck in the CDR cycle the “all-clear signal” that they need to continue with their normal development.

“Suramin produced the most dramatic improvement in autism symptoms that we have ever seen with anything we have tried,” one parent of a child in the study wrote.

“Nothing has come close to all the changes in language and social interaction and new interests that we saw after suramin,” said another.

Naturally, the sample size of this study leaves room for speculation and even the study’s supporters are quick to note this.

“We would have loved to have done a much larger trial,” said John Rodakis, the founder and president of N of One: Autism Research Foundation, which supported the trial. “We just didn’t have the funding for it.”

Naviaux’s study was entirely funded by grassroots efforts and from autism parents and advocates. They received no federal funding.

The first drawback to the study is that the effects of suramin — the remarkable positive cognitive and emotional improvements — are only temporary. Another worrisome aspect of the study is that all the children who received suramin experienced a rash.

Despite these issues, the incredible response by those who were administered the drug definitely warrants further research, and the parents of the children who received it agree.

For now, the next challenge is funding. “This work is new and this type of clinical trial is expensive,” Naviaux said. “We did not have enough funding to do a larger study. And even with the funding, we were able to raise, we had to go $500,000 in debt to complete the trial.”