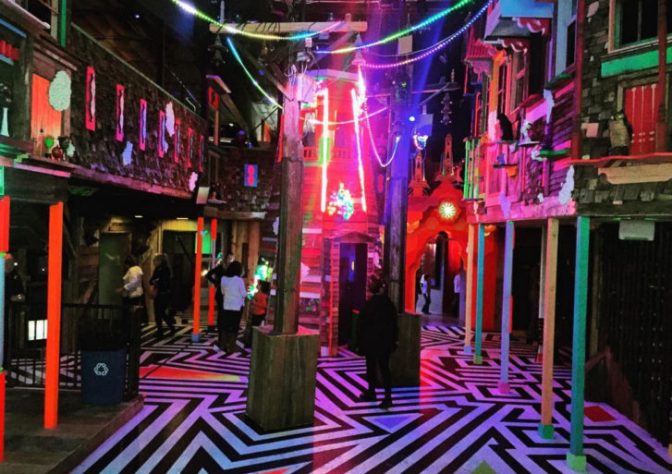 The future is Meow.

A narrative about a Big Brother-style government accompanies visitors as they explore the House of Eternal Return. Image provided by Meow Wolf.

Sante Fe is well known for it’s art scene, but the latest addition to their community appears to be from another star system. Meow Wolf’s House of Eternal Return, has opened, and is quickly gaining national attention. This art and sound installation is part theme park and music venue. Though it’s seen through a psychedelic lens that follows a dark narrative  around  a secret cult, led a Jim Jone’s style guru. There is even the notion of a shadow government watching your every move.

The experience is multi-sensory overload. You first embark on your journey when you arrive at an old bowling alley in an industrial part of the city of Santa Fe, New Mexico. Inside, you enter a second structure, which is an old two-story house that’s fully furnished; yet things seem slightly different. As you explore deeper through the house, the journey becomes more surreal and fantastic. You are free to wander and explore each room however you choose, since the experience is meant to allow you to submerge your psyche into the mysteries that surround you. This is a “fun” house of great depth , blending the surreal, sci fi vibration of a collective mind inspired by popular culture, videos games, and comic books. It’s Avant garde exploration into the mind of millennial culture. A Renaissance of visionary experiences intended to be interactive and understood. The intention feels multidimensional and undefined, going completely outside of the box and allowing the participant to delve deep into fantasy of the subconscious mind.

The House of Eternal Return is a series of fantasy environments. Image provided by Meow Wolf.

Meow Wolf’s House of Eternal Return is a partnership with Santa Fe resident George R.R. Martin of Game of Thrones. He purchased the old bowling alley 3 years ago, upgraded it, and turned it over to the Meow Wolf artist collective. They took the opportunity to raise over $2.7 million raised by investors for $25,000 each. The artists are paying the loans off through admissions, $18 for Adults, $27 for Kids. Their music and evening entertainment events are ticketed separately.

Each artist who spent the 14 months on building the installation at the facility, all work at the venue, taking tickets, working the gift shop, and handling maintenance. It’s a labor of love, which allows the artists to integrate themselves in the community of the Santa Fe, breaking down boundaries and pushing the limits of the artistic experience, making the impossible possible.