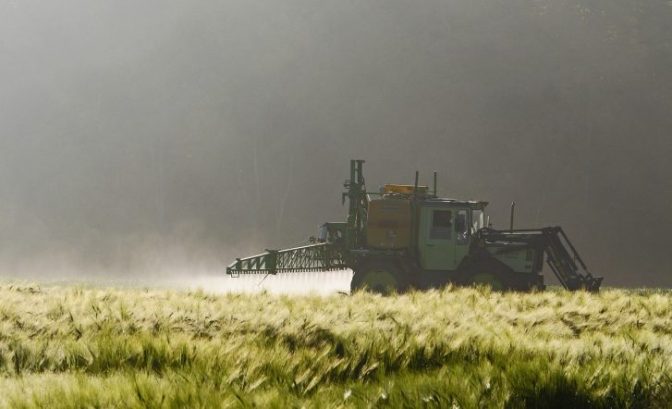 (NaturalHealth365) While heart disease and cancer remain the two main causes of death in the United States, the past 20 years have seen skyrocketing rates of Alzheimer’s disease, autoimmune disorders, type 2 diabetes, obesity, non alcoholic fatty liver disease and autism.  Could all these health issues be resolved by getting rid of toxic chemicals like, glyphosate and improving the quality of our food supply?

An increasing number of independent researchers believe that the rise of these diseases is associated with exposure to glyphosate — the active ingredient in the weed-killer Roundup – leading some scientists to deem it the “monster molecule.”  Sadly, the problem is far worse than most people imagine.

Help us wake up the world and share this report with family and friends.

Several thousand plaintiffs are currently suing Monsanto, the manufacturer of Roundup, alleging that the herbicide causes non-Hodgkin lymphoma, a form of blood cancer.

Although Monsanto has long insisted that their product is harmless to humans, newly released documents related to the lawsuit reveal that the company has long been aware of glyphosate’s toxicity – and suppressed research, bribed scientists and even suborned perjury in an attempt to deceive the public.

Glyphosate, classified as a “probable carcinogen” by the World Health Organization, was recently declared a carcinogen by the state of California. The toxin is heavily used on Roundup Ready crops genetically engineered to tolerate it – and on conventional crops as well.

It is employed not only as an herbicide but also as a dessicant to dry out crops before harvest – and its use has increased over 800 percent in the last few years alone.  Recent research on glyphosate is allowing scientists to study the exact mechanisms by which it can wreak havoc on our health.

Glyphosate exposure linked to a pair of killers: cancer and heart disease

In a 2013 review published in Entropy, independent scientists Dr. Anthony Samsel and Dr. Stephanie Seneff assert that glyphosate may be “the most important factor in the development of multiple chronic diseases that have become prevalent in Westernized societies.”

The researchers report that glyphosate causes cancer – particularly of the breast, pancreas, kidney, thyroid, bladder and liver – and add that it also damages cell DNA, impairs the absorption of minerals such as manganese and iron, and disrupts fructose metabolism.

Not only is glyphosate toxic in and of itself, causing the inflammation, oxidative stress and DNA mutations that can trigger cancer, but – in a sort of biological “Catch-22” – the chemical cripples the body’s natural defense mechanisms that could otherwise help to detoxify and neutralize it.

The researchers report that glyphosate impairs detoxification by inhibiting beneficial substances known as cytochrome P450 enzymes, which are responsible for breaking down toxins into water and flushing them from the body.

Glyphosate kills weeds by suppressing the shikimate pathway, a metabolic system that exists in plants – but in not animals or humans. Because animals and humans lack this pathway, glyphosate advocates argue that the chemical presents no danger to them.

However, this may be a false argument. Drs. Sempel and Seneff point out that indispensable human gut bacteria do, in fact, possess the shikimate pathway, and are thereby susceptible to harm from glyphosate.

To be clear: glyphosate is toxic to the gut microbiome (the community of bacteria living in the intestinal tract) – killing beneficial bacteria while encouraging the growth of pathogens such as salmonella and clostridium.

Studies have shown that glyphosate damages microvilli in the gut, worsening – and possibly even causing – celiac disease.

Glyphosate’s ability to inflame cellular membranes and block normal hormone function also promotes the accumulation of fat, leading to unhealthy weight gain and obesity. And here’s a nasty twist: due to glyphosate’s deactivation of the body’s detoxifying enzymes, the chemical promotes the storage of toxins in the adipose tissue that it helped to create.

(Is it any wonder that rates of both obesity and nonalcoholic fatty liver disease – for which obesity is a primary cause — have been soaring in the past few decades?)

Unsurprisingly, recent animal studies have shown that glyphosate can cause liver damage. But, what is surprising – and disturbing – is the miniscule amount used in the study.

The best way to minimize your exposure is to switch to an organic diet, avoiding all conventionally grown and processed foods. By law, organic foods can not be grown using chemical pesticides or genetically engineered seeds.

Because conventionally raised livestock are fed corn and soy that has been doused with glyphosate, you should always choose grass-fed organic beef and dairy products.

You can support detoxification by helping your body crank up its production of glutathione – a supremely important natural antioxidant. Supplementing with N-acetylcysteine, glycine and glutamine can help your body create more glutathione.

You can also raise your levels by supplementing with liposomal glutathione.

Other liver-supporting herbs and nutrients include silymarin from milk thistle, dandelion root and lipoic acid.

Many integrative healthcare providers advise taking activated charcoal to aid in the elimination of glyphosate – especially if you have reason to believe you have been exposed to harmful amounts. For maximum benefits, be sure to choose a formulation made from coconut shells or identified wood species.

Americans spray more than 100 million pounds of Roundup on their yards and farms every year – while research showing glyphosate’s adverse effects just keeps on piling up. Here’s hoping that other states follow California’s example – and identify this toxic chemical as the carcinogen that it really is.