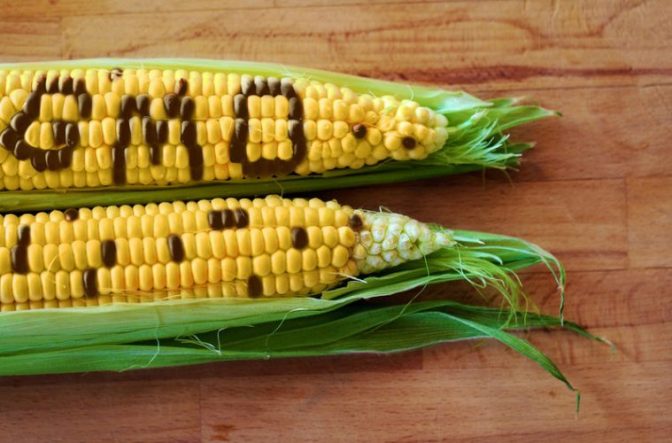 Genetically-modified organisms (GMOs) have undoubtedly become one of the most controversial food and environmental subjects to date. Food companies fight GMO labeling, various food chains and brands have chosen to cease including GMO ingredients on their menus and in their products, health advocates continue to push for GMOs being banned altogether, and yet, lurking in the background is the Big Food and industrial corporations quietly making large profits at the expense of our health while the fight continues to unfold.

There remain so many unknowns about GMOs that have people concerned, including the long-term health effects of ingesting them and the harm the plants and farming methods have on the environment. And while numerous studies reveal that GMOs can, indeed, be harmful to human health, for instance, eloquent statements assure people they are okay.

“Plants and crops with GM traits have been tested more than any other crops—with no credible evidence of harm to humans or animals,” a statement on the Monsanto website proclaims. And then there are, of course, industry-funded studies that tell us GMOs are safe, beating out the studies that truly matter, for a fear of loss of valuable profit.

Under our very noses, we are being duped; another well-planned con job that throws human and environmental health by the wayside for a pretty penny. And no matter the argument on either side, one thing seems impossible to ignore: there is a huge lack of official safety testing on GMOs. Yet, the evidence presented thus far acknowledges that transferring genes from one life form to another may have detrimental and unintended biological consequences.

But how did this all begin? And why did it remain so quiet until, suddenly, it was so in our faces we chose to fight over it? If we take a step back and review the history, you’ll realize how the con unfolded.

Genetic modification is meant to make crops “Roundup Ready,” in which they are able to withstand being smothered in Monsanto’s Roundup, which is the biggest herbicide in the world. The main ingredient in Roundup, glyphosate, was announced to be a likely cause of cancer in 2015 by the International Agency for Research on Cancer (IARC).

And because no one even tried to monitor amounts of it in foods until this year, with the FDA announcing plans to follow through with testing, glyphosate is everywhere these days.

It all comes down to money, as there were always methods to detect glyphosate, but the FDA wanted to wait around for less expensive options. Yikes.

The Politics of GMOs

To ensure the concerns of GMOs slipped through the cracks, inside help was needed, and no less, from the people whose job it was to keep some corruption from occurring.

It began with a U.S. Supreme Court permitting certain life forms to be private property back in 1980. The high court ruled in favour of allowing scientist Ananda Chakrabarty to own the intellectual property right to a GE oil-eating bacterium. The U.S. Patent and Trademark Office had previously denied the property rights, claiming that living things “are not patentable subject matter.” But the court’s permission soon followed, under the grounds that GE organism were “manufactured” and so could be covered by patent law.

And as for the FDA official we can thank for that? It was Michael Taylor, a former attorney for the Monsanto Corp of St. Louis.

And then there’s the instance of then-Vice President George H. W. Bush in 1987 telling a Monsanto lab, who was concerned about the approval process for their new crops, laughing off their worries. “Call me. We’re in the dereg business. Maybe we can help,” he told the Monsanto executives.

Five years later, as the president of the United States, Bush assigned Dan Quayle to retrieve a “regulatory relief initiative” for GMO crops underway. Quayle harped on biotech’s ability to procure profit, and urged for the resistance of unnecessary regulations. Taylor was then appointed by the administration, and so no safety testing or special labeling was required. Even more disturbing? Taylor later became the VP of Monsanto.

And so, the ways in which Monsanto worked their way into politics, taking over our supermarket shelves, seemed immediate.

In fact, by 1993, Rufus Yerxa, Monsanto’s Chief Counsel, was nominated as U.S. deputy to the World Trade Organization. By 1996, Michael Kantor, who was on Monsanto’s Board of Directors, garnered the roll of U.S. Secretary of Commerce. In 2000, it was Carol Tucker Foreman, a lobbyist for Monsanto, who was given the “Consumer Advocate” roll on the international committee assessing genetically modified foods. In 2001, Anne Veneman, who was on the Board of Directors of one of Monsanto’s biotech subsidiary called Calgene, became the head of USDA, and held the power of regulating genetically modified organisms. Also in 2001, Donald Rumsfeld, who was the CEO of Searle pharmaceutical corporation owned by Monsanto, became the Secretary of Defense, while Linda Fisher, the former VP of Government Affairs for Monsanto, was appointed as Deputy Administrator of Environmental Protection Agency. By 2002, George Poste, who was Monsanto’s animal specialist, became the head of the bioterrorism division of Homeland Security. Then in 2008, Obama appointed Taylor as Deputy Commissioner of FDA. Obama also appointed Roger Beachy, the former director at Monsanto, as head of USDA and gave Tom Vilsack, who was the creator of Governors’ Biotechnology Partnership, the commissioner of USDA position.

And so we have reached an inevitable crossroads, with power in the wrong people’s hands, but plenty of health activists and well-informed people to fight for what’s right. With 80 percent of processed foods now containing GMOs, the public has refused to buy into the brainwashing antics of this industry.

And so, the labeling of GMOs has been demanded. By July 2016, under Vermont law, such labeling became required, but was then replaced by a bipartisan bill passed by Congress and signed by President Obama requiring GMO labeling only on Smartphone apps, as opposed to on actual labels.

But still, efforts continue to promote GMOs as safe and effective, like a report released in May 2016 by the National Academy of Sciences saying there was “no evidence” that GMOs were unsafe to eat, nor did they offer adverse environmental impacts, and therefore should not need to be labeled. Why would they do this one might ask? The Academy’s research department, the National Research Council (NRC), is well-connected to the GMO industry.

What we’ve seen is the firm grasp Monsanto and its biotech allies have on our food thanks to its powerful resources and intimidation techniques used to buy or pressure scientists, sway farmers, and partner up with lawmakers.

George Orwell once said: “until people become conscious, they never rebel and until after they have rebelled, they cannot become conscious.” While the criminal elite may be working to control the masses, they cannot take away our thoughts. The more informed we become, the harder it will be for their fancy words to win us over.