Government as Explained by a Fictional Conversation with an Extra-Terrestrial 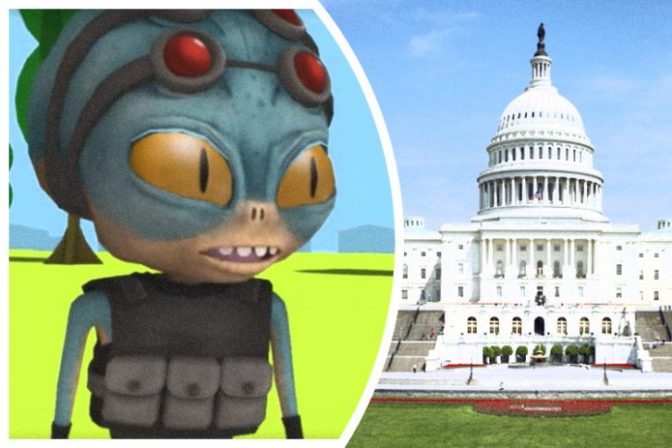 What if you had to explain government to an extra-terrestrial? It would probably sound pretty absurd.

A group of people makes the rules for everyone else. They hang out in buildings with flags in front. They punish you if you break the rules, but they themselves don’t have to follow the rules. One of the rules they have is that you have to pay them money. They often use this money for stuff you’d never support, such as war.

“You think it’s necessary for your survival to have a system where some humans among you, for a short while get to call themselves the government. And they get to order everyone else around like slaves and, if they want, commit mass murder overseas, using money they stole, using threats of violence. Politicians get to kill, enslave and steal because if they didn’t someone else might. And you try to elect good, honest people to be politicians, but what happens every time is that the people you elect turn out to be corrupt, evil, lying, crooks. That’s your system?” ~Alien

It’s rather strange that this point is most easily digested when presented by a cartoon alien in a very simplified hypothetical conversation, yet we spend so much of our real-time and energy debating about the merits of particular political parties and hoping for the system to change itself.

Vic Bishop is a staff writer for WakingTimes.com and OffgridOutpost.com Survival Tips blog. He is an observer of people, animals, nature, and he loves to ponder the connection and relationship between them all. A believer in always striving to becoming self-sufficient and free from the matrix, please track him down on Facebook.

This article (Government as Explained by a Fictional Conversation with an Extra-Terrestrial) was originally created and published by Waking Times and is published here under a Creative Commons license with attribution to Vic Bishop and WakingTimes.com. It may be re-posted freely with proper attribution, author bio, and this copyright statement. Please contact [email protected] for more info.