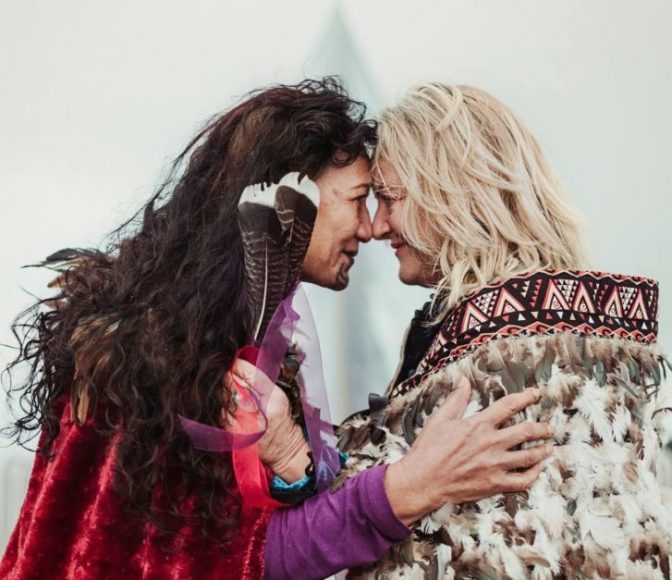 A hongi is a traditional Māori greeting in New Zealand. It is done by pressing one’s nose and forehead (at the same time) to another person at an encounter.

This is a deeply sacred ritual greeting, and when done with reverence the slow respectful movement as the two faces come closer to each other, moving gracefully through each other’s energy field layers, to meet by noses touching and then gently forehead to forehead – in many ways, this is third-eye to third-eye. It is used at traditional meetings among Māori people and at major ceremonies and serves a similar purpose to a formal handshake in modern western culture, and indeed a hongi is often used in conjunction with one.

In the hongi, the ha (or breath-of-life) is exchanged and intermingled because this greeting is done at such a close distance. The breath-of-life can also be interpreted as the sharing of both parties’ souls. This sharing of the breath-of-life is considered to have come directly from the Gods. The hongi, or the ‘sharing of breath’ is a sacred and revered act. By greeting one another within such an intimate space, the hongi is an act that is just that much more powerful than a mere handshake. By greeting one another at such a close distance, the participants both exchange breath, whilst also intermingling their breath.

The tradition of the hongi recalls the Māori legend of the creation of the first earthly woman, Hineahuone. As in Māori folklore, woman was created by the gods moulding her shape out of the earth. The god Tāne (meaning male) embraced the figure and breathed into her nostrils. She then sneezed and came to life. In this way, Hineahuone (earth-formed woman) was ‘birthed’.

When taking part in opening ceremonies at Festivals in New Zealand, such as Voices of the Sacred Earth, Earthbeat or other cultural gatherings, often the hongi greeting is exchanged. In my experience, I have found this to be a deeply sacred coming together with another, not only in physical proximity, also energetically, spiritually and in a deep honouring way, that connects us to The Field, Oneness, Unity and with deep love and respect. It brings back the Art of Intimacy, being present for another, honouring another’s energy layers and fields by slow soul movements to draw closer to each other, none of this rushed quick hellos or handshakes with perhaps no authentic eye-contact with the other.

Recently, I was blessed to be part of a photographic project for a New Zealand up-and-coming photographer, who is doing her University finals ‘Live Thesis Photographic Art Exhibition’ with her chosen theme being: ‘Connection through Love (what makes your connection unique?)’ Her chosen final image, which resonates fully the energetic experience of the hongi, is my coming together with this beautiful New Zealand Maori Soul Sister here. The channeled writings that accompany our photo here, pertains to US ALL, therefore I am sharing this as a loving reminder to bring ceremony and ritual into everyday life as much as possible! This is a NEW EARTH message for ALL:

“Like All of Creation each form resonates to like Formation for patterns of Energy are emitted and ‘Like attracts Like.’ For you of the Soul Tribe are of the same Energy Patterns of Consciousness. Neither are better of lesser, they just are in the same Resonance. When souls come together, they would have travelled Aeons, in the measure of Time, however in Truth They have and will always be close by like water trickles down the mountain and finds its way back to the stream, the river and then the Ocean. So too it is with Soul companions, Tribe and Universes, Galaxies. All this happens through consciousness, love and kindness, linking, uniting whatever form has the same resonance. Two Souls have come together linked through resonance of Star Names. Energetic patterns that hold signatures their Soul Star Tribes trickling down, finding the natural rhythm, that leads to their Soul Energy System – On to the Immense Ocean of Source Mother Greater Essence, from which all creation burst forth.” 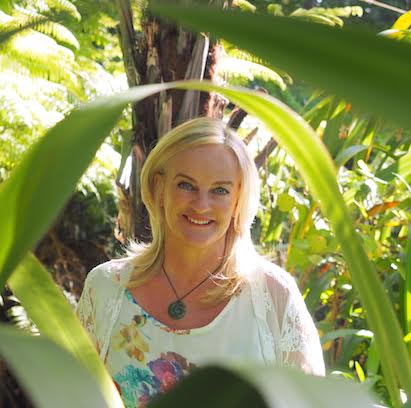 Kirar and Bascha Meier met during Summer Festivals like Voices of the Sacred Earth, where they both were involved in the opening and closing ceremonies, and Bascha also presents workshops there. Their relationship felt like a deep coming together of sisterhood, of two souls that simply knew each other deeply, love each other and have a mission together here in this lifetime. They know deeply that they are being called to sacred land and spiritual hot spots here in New Zealand and around the globe to anchor in the new earth energies through ritual, ceremony, sounding and Light Language codes. They travel when they are called to do so. Both connect to Source Energy and also Galactic Consciousness to offer downloads of vital information, data, and ancient wisdom for modern times. Kirar is based in Auckland, New Zealand, and Bascha is in Wellington, New Zealand (when she is not working overseas). Recently Bascha has joined the faculty at the New Earth University associated with the School of Consciousness & Spirituality, and the School of The Living Arts. www.baschameier.com/