How A Root Canal Could Be Making You Sick 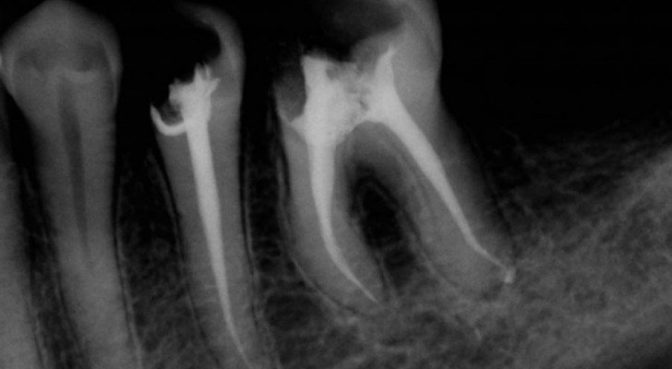 When I was 5 years old, I remember buying a big box of pink tape gum and liquorice strings right before my family and I were about to fly from Newfoundland to our new hometown in British Columbia. “Gots’ to be prepared for the plane ride,” I mused.

But little did I know that over the course of the 7 hour flight I was blatantly over feeding the sugar-loving bacteria in my mouth, and would soon be faced with my first tooth infection at age 5. Even worse, my first root canal.

A root canal is hardly an enjoyable experience for a grown adult, let alone a 5 year old kid, and by the time I was 22, I had undergone 3 in total. Clearly, sugar had me. I was its female dog.

I never stopped to question the dental procedure itself, I mean, what kid or parent would question their dentist? All I knew was that it took away my throbbing pain, and I assume the same reasoning likely goes for the millions of patients who receive root canals every year in North America.

But there are more risks involved with root canals than many are aware of, as I recently discovered, the likes of which are a good cause for consideration.

When A Dentist’s Perspective Changed

In a recent article by Dr. Mercola, titled “Toxic Tooth—How a Root Canal Could Be Making You Sick,” an ex-dentist from New York named Dr. Robert Kulacz tells the story of how his thoughts on root canals shifted half-way through his years of practicing dentistry:

Kulacz explains that he investigated his patient’s claim so that he could prove him wrong, but to his surprise, the patient was onto something:

“I looked at Weston Price’s work, the work of Rosenow, and others. I decided to go to an IAOMT meeting… Dr. Boyd Haley’s lecture on root canals and [their toxicity] changed my life. I realized I was wrong…”

From this moment onwards, Kulacz says that he changed his practice, a decision that would later put his entire profession in jeopardy.

What Patients Need To Know Before Consenting To Root Canals

Dr. Kulacz stresses that he doesn’t completely disregard root canals, but that many dentists and dental organizations and boards dismiss the list of potential risks for patients.

Many dentists believe they can sterilize a root canal tooth and that the act of instrumenting and irrigating the canal will eliminate all the bacteria, but that’s not the case, says Dr. Kulacz.

“I’ve done biopsies on every root canal tooth that I have extracted. Almost all of them have remnants of necrotic debris still in that canal meaning that they were not thoroughly cleaned. Microbiological cultures of the surrounding bone showed infection almost 100% of the time.”

According to the American Dental Association (ADA), any bacteria remaining within the tooth structure becomes “entombed,” and will no longer be of concern, something Dr. Kulacz says is not true either.

The gutta-percha, he explains, the filling material used to seal the canal, is not getting into the tiny lateral canals that branch off the main canal, so leakage is almost always possible, especially since the tooth is porous.

And even a perfectly sealed root canal cannot prevent the small molecule exotoxins produced by the bacteria inside the root canal tooth from easily migrating out of the tooth and into the body. A tooth is more like a sponge than a solid structure.

“Now, it doesn’t mean that all root canal teeth are going to cause disease. It depends upon the type of bacteria that are in there, what kind of toxins they produce, and the immune system health of the individual.

But with 25 to 30 million root canals done per year, multiply that by how many years a person is alive, there’s a lot of root canals out there. And a lot of them are not good,” says Dr. Kulacz.

Bacteria from Root Canals May Worsen Other Diseases

Oral health has a direct relationship with heart health and the rest of the body.

While the ADA states that bacteria from root canal teeth can never travel to other areas in the body, Dr. Kulacz has a different story:

“[A] study done in 2013… compared the bacterial DNA in blood clots and arterial plaque in heart attack patients to the DNA of the bacteria in the mouth.

The same bacteria found in the root canal teeth and in gum disease are found in the plaques in coronary arteries and in the blood clots that caused the heart attack.

These bacteria move from the mouth into other sites of the body like the arterial plaques. They’ve also found the same bacteria in the pericardial fluid or the fluid that surrounds the heart… In heart disease you don’t want infection and inflammation in an arterial plaque.

The presence of oral bacteria from root canal teeth and gum disease in the arterial plaque and blood clots of heart attack patients points to direct causation, rather than correlation between oral infection and cardiovascular disease.”

Dr. Mercola furthers Kulacz’s proposition by explaining how bacteria trapped within root canal teeth are actually “hidden” from the immune system due to a lack of blood supply, and that the root canal tooth becomes more infected over time due to the influx of bacteria from the gum tissue surrounding the tooth.

“Other research has shown pathogenic bacteria from infected root canals destroy or kill the white blood cells designed to eliminate them, which is why the surrounding jaw bone can harbor such chronic infection. The bacteria can also evade your immune system by:

– Bacterial mimicry; mimicking your body’s own bacteria, which your white blood cells will not attack

Lastly, Dr. Kulacz stresses that he is not against mainstream dentistry, but that more discussion needs to be happening around root canals:

Your Options In Making A Decision

As with most medical interventions, preventative measures can always be taken to avoid the intervention in the first place. When it comes to tooth and gum health, diet and oral hygiene is almost always the primary cause of infection.

A healthy diet rich in whole foods and low in processed carbs is always your best protective measure against dental disease and infection.

Not only does a healthy diet optimize your immune system, but when we feed oral bacteria simple carbs, i.e., sugar, these microorganisms produce acidic by-products which in turn eat away at your teeth. Over time these acidic environments lead to more severe infections and the need for interventions like root canals.

Beyond that, Dr. Mercola recommends ozone therapy prior to root canal or extraction, a substance which destroys toxic material and increases your immune response. The ozone is injected around the site of infection with a syringe, and it usually takes a few visits to heal fully.

However, if the pulp tissue has died due to infection, nothing will bring it back to life.

Partial denture. This can easily be clicked in and out of the dentition.

If you decide to have the tooth extracted rather than doing a root canal, there are several options on how to restore that missing tooth. The first and least expensive option is with a removable appliance or partial denture. You need to take it out at night, put it back in in the morning, and keep it clean.

The second and considerably more expensive alternative is to do a bridge. The teeth on either side of the missing tooth are prepared for caps or crowns, and the missing tooth is attached to those two abutment teeth.

The bridge is permanently put in as one unit. The problem is you have to cut down a lot of the enamel on the adjacent teeth, which causes trauma to those teeth, potentially risking the need for another root canal over time.

There is also the choice of a dental implant, which is the most expensive of the bunch, and can cause issues within the mouth such a galvanizing with other metallic materials.

Dr. Kulacz prefers zirconium implants, as they do not have metallic ions found in titanium implants.

For more detailed information on root canals, be sure to check out Dr. Kulacz book, The Toxic Tooth: How a root canal could be making you sick.

What are your thoughts on root canals? Do you think that patients should given more warning about the potential risk factors? Share with us in the comment section below!