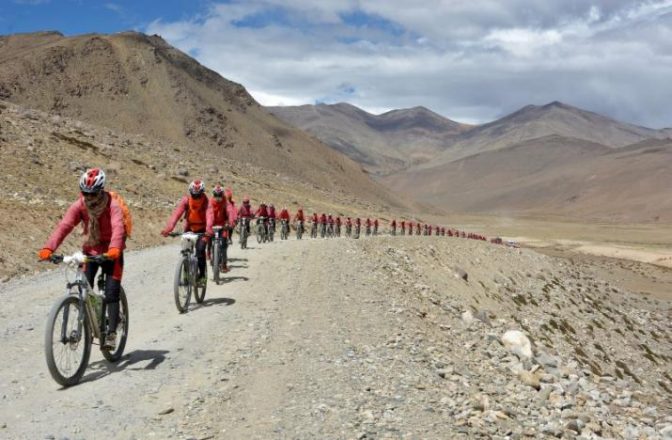 Five hundred nuns from the Buddhist sect known as the Drukpa Order, from Tibet, Nepal, Bhutan, and India dressed in black sweatpants, red jackets, and white helmets, made the taxing journey of 4,000 km from Kathmandu to Leh in India on September 17. Pedaling the strenuous, steep, and narrow mountain passes, the women were raising awareness regarding the human trafficking of girls and women in Nepal and India.

“When we were doing relief work in Nepal after the earthquakes last year, we heard how girls from poor families were being sold because their parents could not afford to keep them anymore,” explained 22-year-old nun Jigme Konchok Lhamo.

“We wanted to do something to change this attitude that girls are less than boys and that it’s okay to sell them,” she noted, saying that the journey reveals that “women have power and strength like men.”

South Asia is home to women leaders and cultures that admire motherhood and worship female deities, yet there are still numerous girls and women being victimized by the threat of violence and the lack of many basic rights. Pakistan, for instance, is known for honor killings, India for feticide, and Nepal for child marriage. But such practices and threats to the female population have become increasingly taboo, and the awareness has lead to better laws and economic empowerment for a slow change for the better.

This bicycle journey is the fourth one for the Drukpa nuns, who have met local people, government officials, and religious leaders, as they spread the message of gender equality, peaceful co-existence, and environmental improvements. The women bring food to the poor throughout their trek as well, and help villagers access medical care.

The Buddhist sect is led by the Gyalwang Drukpa, who is the head of the Drukpa Order. The women, dubbed “Kung Fu nuns” because of their training in martial arts, may be well-respected among many, but have also caused eyebrows to raise from those uncomfortable with these Buddhists’ unorthodox activities.

“Traditionally Buddhist nuns are treated very differently from monks. They cook and clean and are not allowed to exercise. But his Holiness thought this was nonsense and decided to buck the trend,” explained Carrie Lee, who is the president of Live to Love International, which is a charity that partners with the Drukpa nuns to support marginalized Himalayan communities.

“Among other things, he gave them leadership roles and even introduced Kung Fu classes for the nuns after they faced harassment and violence from monks who were disturbed by the growing shift of power dynamics,” she explained.

The Drukpa nuns have gained popularity over the last 12 years, growing from 30 to 500 members. The Drukpa nuns believe they are helping to change the way women are viewed, treated and respected.

“Most of the people, when they see us on our bikes, think we are boys,” noted 18-year-old nun Jigme Wangchuk Lhamo.

“Then they get shocked when we stop and tell them that not only are we girls, but we are also Buddhist nuns,” she continued. “I think this helps change their attitudes about women and maybe value them as equals.”

South Asia remains one of the largest areas of human trafficking in the world, with trafficking having increased by way of gangs manipulating homeless villagers into bonded labor. Two earthquakes struck Nepal in April and May 2015, resulting in more than 40,000 children losing their parents. This has added to the trafficking epidemic, with young girls and women being sold into brothels as a means for dealing with the poverty-stricken circumstances resulting from the natural disasters.

The Drukpa nuns claim the earthquakes served as a turning point in their understanding of human trafficking, which provoked them to find a way to make a change.

“People think that because we are nuns, we are supposed to stay in the temples and pray all the time. But praying is not enough,” noted Jigme Konchok Lhamo. “His Holiness teaches us that we have to go out and act on the words that we pray. After all, actions speak louder than words.”