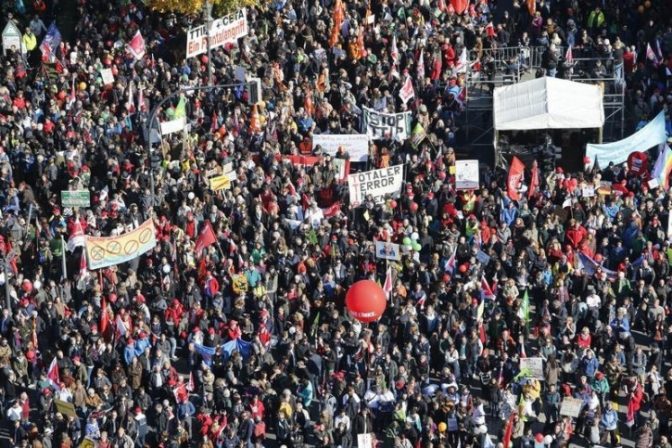 (Era of Wisdom) The World — On the weekend of October 10th, dozens of unrelated large protests sprinkled the globe as tensions continued to escalate in the Middle East. Despite hundreds of thousands of people taking to the streets around the world, with over a quarter million in Germany alone, national media coverage has been (un)surprisingly quiet regarding these events.

Here are five of these global protests:

Estimated to be 250,000 strong, a protest in Berlin took place to oppose the TTIP “free trade deal” — a major move towards corporatocracy. Protests unfolded concurrently in London, Amsterdam, and other European cities.

“This is the biggest protest that this country [Germany] has seen for many, many years,” Christoph Bautz, of citizens’ movement Campact, inspiringly told protesters in a speech.

2. The “Justice or Else” 20th Anniversary Million Man March transpired in Washington, D.C. and throughout America

The Million Man March was originally a protest organized by Louis Farrakhan in 1995. It’s a movement associated with the Nation of Islam to unite African American men and women over various problems with the intention to come together and solve them as a people.

On October 10, Farrakhan led the “Justice or Else” 20th anniversary march in Washington, D.C. Issues related to the police state dominated the protest.

According to The Guardian: “The families [of unarmed black men and women recently killed by the police] asked the marchers not to forget the names of Michael Brown, Trayvon Martin, and Sandra Bland.”

Farrakhan said, “I plan to deliver an uncompromising message and call for the government of the United States to respond to our legitimate grievances.”

Whether or not you agree with every detail of Farrakhan’s personal philosophy, the practice of unifying in public for a protest could be considered the central focus, and in that sense it was a victory.

In 2015, we’re seeing a reinvigorated generation of black activists. This goes side-by-side with a newly-flourishing culture of activism in general.

This event could be considered a day of unity for the new generation of black activists and for activists as a whole, as every activist benefits from proliferation of the culture of activism.

Anti-Islamic “activists” claimed they would counter-protest, but not much happened on that front. They had a more pronounced presence in Texas and Arizona. The anti-Islam protest was oddly-titled the “Global Rally for Humanity” (against Islam).

According to the Pontiac Tribune: “A demonstration for peace dramatically shifted to a demonstration of horrific violence on Saturday when two powerful bombs detonated in the midst of the crowd attending a peace rally in Ankara, Turkey leaving scores injured and 128 people dead.”

“Thousands of Turkish citizens gathered following the deadly attack on a peace demonstration in Ankara — but these mourners and demonstrators unanimously and vehemently placed the weight of the resulting carnage on President Recep Tayyip Erdoğan,” the article continues.

“Witnesses and members of the opposition party came together with families of the over 100 victims, to blame the government for utter failure to provide security for Saturday’s event — which was further compounded when Turkish police refused to let ambulances enter the scene and fired tear gas at attendees immediately following the blasts.”

The actions the Turkish government took to block ambulances demonstrates its stance, but the prospect of the government actually being behind the bombings — to some extent — is disturbing, to say the least.

The Turkish people are fed up with their government, as are many citizens of the world, on this 12th day of October, 2015. The Turkish government subsequently censored Twitter and other social networks in an attempt to derail the protests. The “freedom”-loving United States government continues to ally itself with Turkey despite the country’s total lack of respect for the Kurdish people, human rights, freedom of speech, and its cooperation with radical Islamists.

4. Thousands in India, many farmers, blocked several dozen trains and marched in the streets to protest failed cotton crops

Failed cotton crops delivered a severe blow to farmers and the local economy in India recently. At least 15 farmers committed suicide, and now citizens are marching and blocking trains.

The devastated cotton crop incident is pushing farmers to call for an investigation into why they failed, raising the possibility of fake pesticides being sold to farmers.  Whitefly was the primary pest responsible for two-thirds of the cotton crop failures.

According to NDTV, “Union Ministry of Agriculture has asked for a report on the fake pesticides supplied to cotton farmers. The state government has issued directive to deputy commissioners in the districts to compile the list of the distressed farmers who have committed suicide.”

Additionally, a “Youth Congress” (called the JKPYC) gathered to protest the PDP-BJP government in India. “To protest against failure of the PDP-BJP government on all the fronts, JKPYC (Jammu and Kashmir Pradesh Youth Congress) will take out a state-wide rally tomorrow,” reads an article from New Indian Express.  Obviously, there is a lot going on behind the scenes in India.

5. Protests took place in Belarus, ahead of the country’s elections

Regarding the upcoming Belarus presidential election, it was speculated that the president since 1994, Alexander Lukashenko, would be granted a fifth term. (Editor’s note: After the protests, Lukashenko did indeed win.)

Belarus doesn’t have a particularly good relationship with nodes of Western power such as the European Union (EU) — with sanctions against Belarus — and the nation is stuck in a geopolitical quagmire due to its alliance with Russia.

Belarus is one of four ex-soviet nations that is allied with Russia in the Eurasian Economic Union (EEU), founded approximately a year and a half ago. It includes Belarus, Kazakhstan, Armenia, and Kyrgyzstan. The European Union doesn’t take kindly to independent economic alliances like the E.E.U.

With powerful people developing a distaste for Belarus, sanctions have apparently agitated the people of the nation.

To have a realistic gauge of what is happening in the political sphere of Belarus, one would have to investigate deeper, but from what we can see on the surface, the people of Belarus are dissatisfied with their leader of over 20 years, as well as the circumstances powerful people have them trapped in.

In addition to the aforementioned protests, the weekend saw “pro-gun protests” greeting President Obama as he consoled families in Oregon that were impacted by the recent university shooting. There was a Planned Parenthood showdown in St. Paul, Minnesota, and more protests that most people did not hear about.

Hopefully, the public’s ability to organize for what they believe in will continue to increase globally, with righteous and unrighteous causes (relative to personal perception) competing in a paradigm of empowered and passionate people on all sides.

Proliferation of the culture of activism may cure the ills of a docile people.