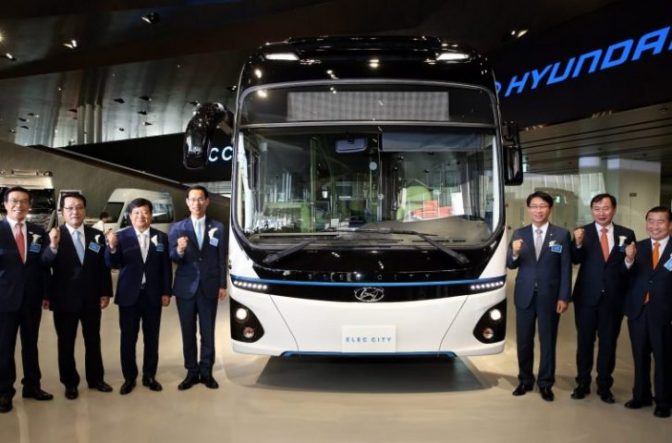 Environmentally-friendly vehicles aren’t quite yet a dime a dozen, but the options have certainly become more diverse. Companies are now trying to stay on top of the public’s overwhelming desire to go green.

South Korean carmaker Hyundai Motor Co. is considered one of leaders in the game, having made huge leaps in its green car lineup in recent years. In an effort to diversify its lineup with environmentally-friendly vehicles, and enhance its brand image in global markets that thrive on clean modes of transportation, Hyundai announced that it will launch an all-electric bus in the domestic market next year.

“There still remain things to be improved in terms of the charging infrastructure for pure electric vehicles,” said Tak Yeong-duck, senior vice president of Hyundai’s Commercial Vehicle R&D Division. “But we have decided to launch the Elec City next year as the government plans to increase the number of charging stations in the coming years.”

The bus, which took eight years to develop, is estimated to cost more than 200 million won, which is $179,000 USD. This doesn’t even include the central government’s subsidy worth 100 million won. It has not been confirmed if the company will sell the Elec City in the United States.

The bus, complete with a 256 kilowatt-per-hour battery, can run 290 kilometers on a single charge that takes 67 minutes. A mere 30 minutes of charging allows it to run 170 kilometers. The electric bus had gone through two versions before reaching the current status, having run into issues with charging — a major driving factor needed to spark demand in Asia’s fourth-biggest economy.

Should Hyundai make the emission-free bus available in the U.S., it will certainly have competition, like the Chinese manufacturer BYD, which has sold electric buses in California, as has the Canadian company GreenPower. Then there’s Tesla CEO Elon Musk, who, as none of us should be surprised, has been considering developing an electric bus.

With its first emissions-free vehicle now unveiled, Hyundai’s new goal is to improve the fuel efficiency of its commercial vehicles up to 30 percent by 2020. The company also aims to sell 105,000 commercial vehicles in global markets, up from 102,000 units sold in 2016. There’s also talk that Hyundai may release a long-range electric vehicle in 2018.

But despite its noteworthy efforts, Hyundai still has some work to do in terms of keeping up with global rivals’ brand awareness and sales, like MAN Truck & Bus and Daimler Trucks from Germany, Volvo Trucks and Scania AB from Sweden and Iveco from Italy.