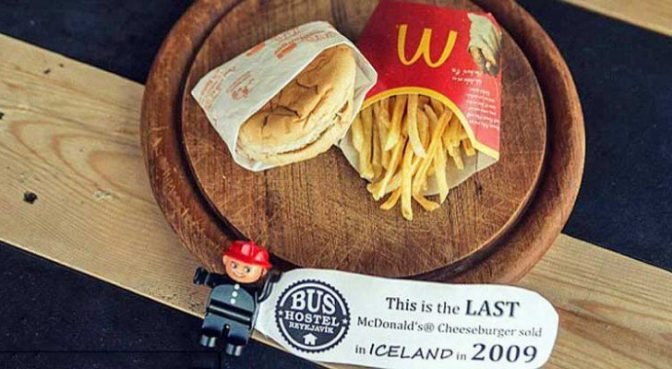 Up there in the ranks of dinosaur bones and Renaissance art comes the star of our daily cabinet of curiosities (#AMH). And no, it’s not a petrified mummy or a two-headed anomaly, but rather, something more relevant and clever.

In a move that will likely one day see future generations looking back and gasping in horror, Iceland has taken its last McDonald’s meal ever sold and placed it on display at a bus hostel in Reykjavik.

Iceland joined the movement of countries saying ‘farewell‘ to the multi-national fast-food chain back in 2009, after low sales and expensive importing fees caused McD’s to pull out of business for good.

The final day that McDonald’s was open in Iceland was October 31, 2009, and on that day a man named Hjortur Smarason purchased a meal as a souvenir. Smarason had no intention of actually eating it, but wanted to hang onto it out of curiosity and because he saw it as a “piece of history.”

At its new home at the Bus Hostel in Reykjavik, the burger and fries sit on display in front of a webcam, where people all over the world can watch in morbid curiosity.

So far, the meal on display has lived up to its “franken-food” reputation, showing not the slightest sign of decomposition and indubitably further sealing the deal on Iceland`s departure from the mega-chain.

McDonald’s has been a hot topic among the CE community over the years, be sure to read more shocking facts about the franken-food chain in the links below.

This Is What’s REALLY In A McDonald’s Hamburger

Domino’s, McDonald’s, & Wendy’s Are All Feeding You A Chemical Used In Silly Putty