Inflammation: Balancing Between Blessing and Curse 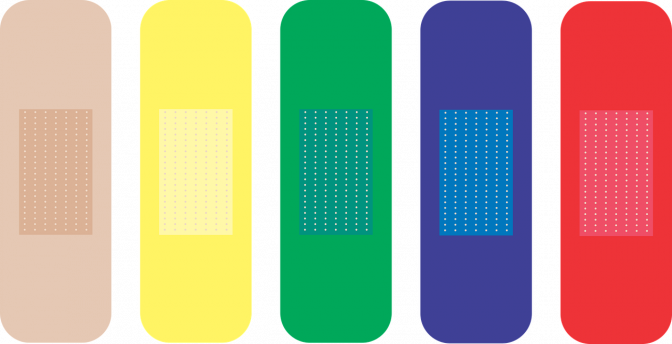 Inflammation is a necessary evil.

Like the emotional evils that will always exist, acutely and/or chronically, associated with human existence: pain, anxiety, anger, inflammation is a physiological manifestation necessary to healing as result of injury. These responses to injury are natural and only become an issue to one’s well being when left unchecked and out of balance.

Our bodies have awe-inspiring cellular and molecular pathways constantly up-regulating and down-regulating enzymes in an elegant effort to maintain homeostasis. However, as we continue to expose ourselves, now more than ever, to harmful commodities and increasingly polluted natural resources combined with unnaturally stressed working and living environments we inevitably throw off our internal redox balancing act on a variety of levels in multiple ways.

The Googled definition of inflammation only scratches the surface.

This oversimplified definition can make it confusing when scrolling down the search page to see links to information associating inflammation to diseases like rheumatoid arthritis1, atherosclerosis2, and cancer3.

The following is my attempt to share some connected dots and possibly shed some light on how inflammation inevitably leads to many of the diseases and disorders on the rise today.

The classic inflammatory responses are initiated in a variety of ways by one’s immune system. Chronic assault by foreign bodies* and pathogens**, structural and functional tissue damage, and/or mutational defect will launch an array of white blood cells specifically designed to target a particular threat to homeostasis and one’s well being. Each immune cell is packed with a unique set of cytokines (inflammatory signaling proteins) to alert and also armed with reactive oxygen synthases and enzymes to aid in the healing process it is called forth to respond to.

*for-eign bod-y (noun) an object or piece of extraneous matter that has entered the body by accident or design.

**path-o-gen (noun) a bacterium, virus, or other microorganism that can cause disease.

**Xen-o-bi-ot-ic (noun) substances, typically a synthetic chemical, that are foreign to the body or ecological system. 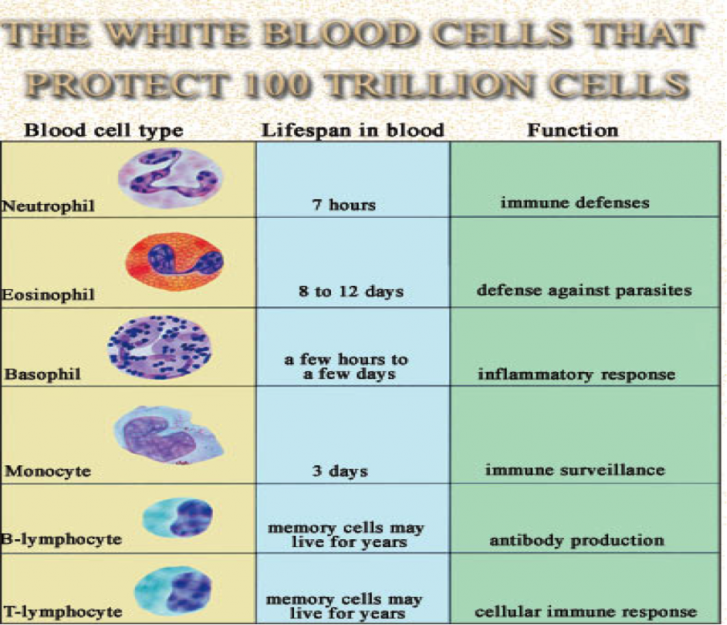 Neutrophils circulate in blood and are first responders in the inflammatory response. Neutrophils can engulf bacteria and other foreign invaders and are also known to engulf cancer cells.

Eosinophils can attack large multicellular parasites. Eosinophils reside in certain areas of the lymphatic system in and around thymus and are also involved along with mast cells in the allergic response.

Basophils are the least common white blood cell and also play a role in attacking parasitic invaders such as ticks. Basophils can secrete histamine in response to allergic reactions and also contain heparin and anticoagulants.

Monocytes are part of our innate immunity and have a variety of roles. They are most well known for being the sentinels that can circulate and move out of circulation into the tissues. Once in your tissues monocytes further differentiate into macrophages and engulf foreign invaders as well as dead cells at the site of cellular damage and inflammation.

B cells are our immune system’s antibody mediated response. B cells work with T-cells to regulate the specific non-innate immune response. They are the memory of the immune system and once they have recognized an antigen (any piece of bacteria, virus, or object foreign to your body) they produce antibodies that allow the immune system to recognize that invader from then on out.

T cells are a group of lymphocytes with various roles: helper, cytotoxic, memory. All roles are involved in the cell-mediated immune response which works to destroy viruses and cancer cells.

These wonderful hematopoietic cells are constantly surveilling, tagging, and destroying hazards to our health from particulate matter in our lungs to adenoviruses in our ears, noses, and throats, to that little ball of cells growing out of control somewhere deep inside. The imbalance that occurs when these white knights get out numbered or overstimulated results in Dis/Ease4,5.

Unfortunately, your immune cells and the inflammatory molecules they produce are not the only physiological contributors to inflammation. Damaging inflammatory molecules are regularly produced in every mitochondria in every cell of your body as part of the vital metabolic process known as cellular respiration where the eventual reduction of oxygen to water results in massive amounts of cellular energy in the form of ATP6. The mitochondrial macromolecular machinery responsible for the biochemical conversions along the way are not immune to making mistakes and the electrons they flux towards oxygen at the end of the transport chain tend to slip off creating reactive by-products known as Reactive Oxygen Species or ROS.

Oxidants or ROS are molecules or ions generated by the incomplete one electron reduction of oxygen. Better known ROS include superoxide, hydrogen peroxide, hydroxyl radical, nitric oxide, and peroxynitrate. ROS are highly reactive because they carry an unpaired valence shell electron. The reactivity of the various oxidants depends on their production within the cell, the presence of enzymes which regulate their conversion to less reactive species, and their rate of oxidation of other molecules within the cell, such as proteins, lipids, and DNA.

For decades ROS was believed to be the endosymbiotic trade-off for copious amounts of energetic currency7,8. If left unchecked, reactive oxygen species are capable of damaging cell membranes, proteins, and DNA leading to more inflammation, aging9,10, mutation, and disease, but ROS levels under healthy physiological conditions are regulated tightly by a variety of enzymes known as antioxidants11. This tight regulation between oxidants and antioxidants became even more relevant as researchers revealed ROS acts as a signaling molecule capable of modulating cell signaling cascades, both directly and indirectly12-16. Physiologically relevant amounts of ROS are actually critical cell signaling molecules for healthy cell growth, differentiation, and apoptosis17. The fact ROS can indirectly signal gene transcription or directly modify certain proteins to inhibit or activate various cell signaling pathways makes regulation of ROS vital to our overall health and wellness.

Unhealthy diets, sedentary lifestyles, along with exposure to the growing number of xenobiotics*** in our air, food, and water leads to malfunctioning metabolic machinery and increased ROS production (inflammation).18,19 When the amount of ROS exceeds the capabilities of our amazing antioxidant enzymes it is not just the ROS-mediated direct damage our bodies should be concerned with but the more insidious impact chronic levels of ROS (metabolic inflammation) can have on the cell-wide signaling cascades responsible for regulating your cells’ decisions to divide or die. The more inflammation the more cellular mutations, damage, dead and rapidly dividing cells to trigger the monocytes and T-cells along with their inflammatory mediators. This can create toxic tissues with impaired functions that eventually land you in a doctors office.

Your body works hard at the cellular level even when you’re not so it’s important to be mindful of things that improve your individual metabolic and immune health.

Getting the Right amount of Sleep for You

Taking the Right Vitamins for You

Find the Right Exercise Routine for You

Explore the Right Conscious Practices to Reduce Stress that Works for You.

Sweeping lifestyle changes can be jarring to the point that they don’t stick. If you’re feeling achy and inflamed due to age, diet, tech use, stress at work/home pick one thing to work on. Working on one area will naturally lead to improvement in all other areas as you start to feel better and less inflamed/stressed/fatigued. Look into how to get the rest that you need and put what you learn into action or go see a nutritionist and find out what changes to your diet and supplements you can make to gain back the energy you lack to exercise and then enjoy exploring the growing number of gorgeously delicious healthy recipes available online and in our NEU Library. Try some simple exercises, yoga poses, or stretches you can incorporate into your routine everyday that help maintain your posture and when you’re ready, embrace an upgraded routine that makes you sweat. Take walks and breath. Take time to get grounded. Making an effort to do these things, along with eating the right foods containing all the nutrients your cells and enzymes need will keep them working and working right through day and night.

NewEarth University offers courses and a library filled with educational resources that may help reduce stress and inflammation through diet, exercise, and conscious practices. More are always being added as we collectively learn ways to be healthier and feel better.