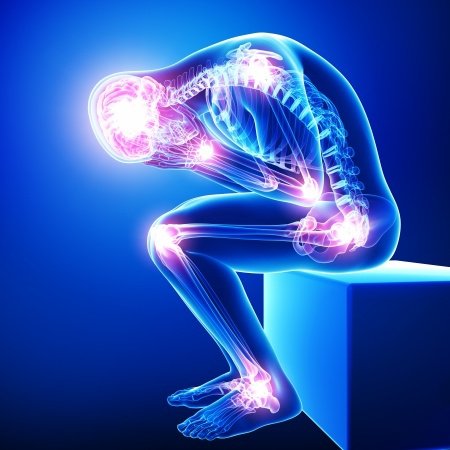 Depression is a scary, dark, and seemingly uncontrollable beast many of us have experienced in our lifetimes. Some of us have even found the length and depth of our depression to be so overwhelming we seek medical advice that often leads to prescription pills.

Prescription pills have their downfalls, however, including side effects like weight gain, loss of libido, and, according to a new study, the potential to actually double the risk of suicide and violence.

And while depression is typically treated as a mental disorder, new research says that, perhaps, that’s not always the case. What if depression also has a physical cause that requires eliminating inflammation in the body to alleviate symptoms?

Research has recently linked depression to chronic inflammation. A 2012 study in the journal Neuropsychopharmacology noted:

Elevated biomarkers of inflammation, including inflammatory cytokines and acute-phase proteins, have been found in depressed patients, and administration of inflammatory stimuli has been associated with the development of depressive symptoms. Data also have demonstrated that inflammatory cytokines can interact with multiple pathways known to be involved in the development of depression, including monoamine metabolism, neuroendocrine function, synaptic plasticity, and neurocircuits relevant to mood regulation. . . .

Psychosocial stress, diet, obesity, a leaky gut, and an imbalance between regulatory and pro-inflammatory T cells also contribute to inflammation and may serve as a focus for preventative strategies relevant to both the development of depression and its recurrence.

In this respect, depression is the result of your body trying to shield itself from an inflammatory response. Some of the biggest symptoms of depression associated with bodily inflammation involve flat mood, slow thinking, avoidance, changes in perception, and metabolic changes. Evolutionary psychology suggests that this once protected us, keeping us holed up in our caves since we felt too low to go out during a time when illness made us vulnerable to attack, and at risk of passing infection on to others.

In 2013, investigators at Denmark’s Aarhus University analyzed the health records of about 3.6 million people and concluded that those with inflammation caused by autoimmune conditions had a 45% greater chance of suffering from depression. And those who had ever been in the hospital for a life-threatening inflammatory infection were 62% more likely to suffer from depression.

All the findings out there, all the scientific explanations, beg a crucial question: Are people depressed because of inflammatory illnesses? Or is there perhaps an unknown physical process that makes inflammation trigger depression?

Researchers believe that cytokines in your blood, or inflammatory messengers like CRP, interleukin-1 (IL-1), interleukin-6 (IL-6), and TNF-alpha, are linked to and predictive of depression.

In melancholic depression, for example, white blood cells called monocytes make pro-inflammatory genes that trigger the secretion of cytokines. Meanwhile, cortisol sensitivity decreases, which is known to shield against inflammation.

And another team of Danish researchers published a study that found raised levels of C-reactive protein, a substance in the body produced in response to inflammation, were linked to an “increased risk for psychological distress and depression in the general population.”

Dr. Mercola noted that inflammatory agents bring information to your nervous system by stimulating your vagus nerve — responsible for connecting your gut and brain.

“During inflammatory states, brain cells called microglia are activated. When this happens, an enzyme called indoleamine 2 3-dioxygenase (IDO) directs tryptophan away from the production of serotonin and melatonin, instructing it instead to produce an NMDA (an amino acid derivative) agonist called quinolinic acid, which can trigger anxiety and agitation,” he says.

Research also suggests anti-inflammatory drugs may be able to treat depression and would be less harmful than antidepressant pills like selective serotonin reuptake inhibitors (SSRIs).

While SSRIs are said to work by boosting levels of serotonin in the brain, Peter Jones, a professor of psychiatry, believes some of the benefit of antidepressants may come from the fact that SSRI drugs seem to lessen inflammation in the body as a side effect.

Currently, the arthritis drug sirukumab is being tested on depressed patients, while researchers are also looking into creating anti-inflammatory drugs that specifically target depression.

Of course, this solution seems to simply be replacing one issue with another, and one drug with another. But the biggest breakthrough seems to be a new understanding of depression, and if inflammation is, in fact, as closely linked as research shows, you could begin by eating a ketogenic diet that is high in healthy fats and low in net carbs. This type of diet even eliminates C-reactive protein almost completely.

Even just snacking on some raw nuts could lower your levels of inflammation. A great source of healthy fat, eating just a handful of them five times per week can reduce inflammation, according to recent research reported in Reuters Health.

Below is a great interview taken from an article that was written by Dr. Joseph Mercola. You can find some more information on this link if you’re interested in listening.

Related CE article on depression: How Depression Affects Brain Structure & What You Can Do To Change It Back