Your inner child healed in a day… How? 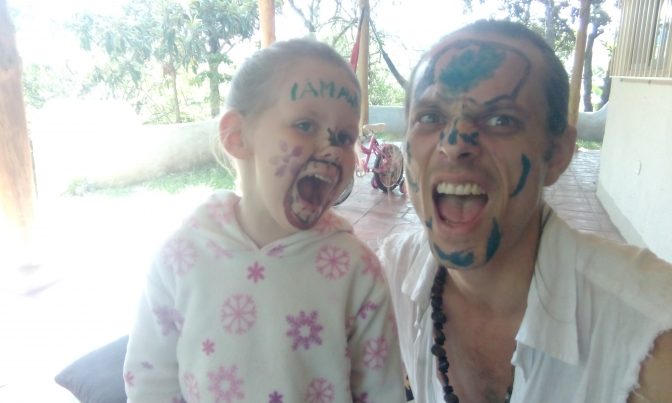 Sounds too good to be true, right? Well you can bet your bottom dollar that your deepest wounds will be mirrored to you at some point today, in at least some subtle way, so really it’s your simple choice of whether to own them; choose to see their origin; feel them; and transcend them today (or whenever they do next mirror back to you), or not…

Well the purpose of this article is to tell you that this is a crock of shit and, just like crossing the self-realisation/enlightenment Rubicon itself, transcending your deepest darkest wounds will happen immediately following the point at which you decide to choose to do so, properly, completely, and to the exclusion of all your bullshit, meaning to the exclusion of EVERYTHING which is ‘personal’ to you or identified with by you. In fact if you really are true to your stated position of having stepped up to the personal development plate, then you aint gonna be able to hide from this fact much longer…

Really though, you need to see how, right? Well, all I can share with you here is my own experience, and hopefully a truly vulnerable display from me in that regard will have you facing yours today too!

So for me, as with everyone I guess, my last remaining wounds were very hard to see – my ‘approach’ to transcending all aspects of personal bullshit (ever since crossing the self-realisation Rubicon some years back) was to get out of the way and let the truth itself deal with things. Which I certainly stand by as the way to go, but evolution is a game in which we need to participate – it happens through us – so we need to own this as well. Anyhow, having allowed most of my shadow and trauma to burn itself away in the blazing light of truth over the last few years, there have only been a couple of really deep and subtle wounds left – but they are the deepest darkest places that I have never before ventured; never before understood how to find… until now. And, as always, they related to childhood trauma!

So the first aspect of healing trauma is noticing how it expresses through you in the outer world. Mine expressed itself as a kind of ‘rush energy’. Not all the time, and not in a massive way, but there would still be times where I would approach an activity with a certain energy, in the heart, that carried with it a tension; the need or desire to rush or push. Accepting that the witness of this was so obviously pointing to a wound, was the first step. Sitting with this, in a truly open an inquisitive way, was the second step. Noticing the first intuition that came to mind, and accepting the truth of it (in this case that it related to my mother), was the third step. Sitting with the sense of unexplainable sadness (or whatever other emotion may be inexplicably expressing itself), whilst being conscious of the events playing out in my environment which were acting as mirrors to show me the way, was the fourth step. Accepting the obviousness of the truth that those mirrors were more heightened because of the exercise and thus an exact carbon copy of whatever the wound itself was, was the fifth step (in this case I was talking through what was arising in me with my love, and we were being constantly interrupted by her baby boy, who would always start screaming every time she and I were talking about anything really important or transformative. Observing the dynamic, he was so obviously expressing a feeling of abandonment by his mum… not that she was doing this, but he was simply picking up on me and becoming the perfect mirror. All of these things are here in our environment for us to see all the time and, when we do decide to commit to this kind of inquiry, they ramp up 100 fold to show us the way… because we call them in by our genuine desire to grow). Sitting alone and feeling into the truth that was now intellectually obvious (perhaps intentionally using the inquiring mind to support the exercise to cut through any unintended or uncontrolled mental activity if you have any, will be helpful), for as long as it takes to get to the core feeling, was the sixth step. And crying my eyes out curled up in a ball on the bed was the seventh step! 10 intense hours start to finish – job done.

In case it’s not already obvious, the wound that I refer to specifically related to the fact that I was abandoned by my mother. This was almost impossible to see, or accept, before because I had the most perfect mum you can imagine – kind, compassionate, unconditionally loving, successfully filling the physical needs of everyone in the family without fail, playing with me all the time, etc. – by anyone’s estimation, including mine, the perfect mother. But, in getting to that core feeling, the reality was that, yes, she was all these things, but what a child REALLY needs is deep pure love expressed at the soul level and, whilst my mother had always expressed the love that she had unconditionally, the volume of love that she held in her (no less than any other westernised mother) was tiny in comparison to the full-spectrum we are each capable of embodying – the full-spectrum that everyone of us is bathed in before we come to this world, and which we need when we arrive here if we are to have our real needs met at the deepest emotional level.

Really, pretty much every one of us was abandoned by our mothers in this way – barely anyone born/raised/living in the western world has a truly developed capacity to feel; to expand their capacity for love to its ultimate heights. And so, as I felt in to this there was obviously be no blame for any of this – quite the opposite in fact – it simply made me have a greatest sense of love and compassion for my mum, who had so obviously endured the same thing from her mum, and her mum before. This healing in me now so obviously represented the opportunity to heal an entire family line… and when I picked up the phone to tell her all this, it was with an even greater sense of love for the woman who brought me into this world!

As I write I have never felt so clean… after the whole self-realisation gig, I always described it as ‘dysfunctional enlightenment’ – you get it, and are beyond ‘the world’ so to speak, but there remains a kind of drag-factor of a human personality, which doesn’t have to colour the things you do any more, but is nonetheless a continuing limitation on the heights to which one may climb. Now however, everything that remains as part of a human personality feels like it is an expansive, enhancing, serving thing – this is very much a new experience… and a very cool one at that!

There is one last thing that I should mention – in fact probably it is the critical piece to being successful in an endeavour like this… commitment. I almost neglected to include this because it has been my natural way since being a child – to throw oneself at everything one does, completely. You need this level of commitment for an exercise like this or else your human psyche will win the day every time. For me there was no other option – I decided right from the moment that I realised there was a wound to be healed that I was going to see this through to the bitter end and would not be doing anything else until complete; I would not be re-engaging life in any manner until I had drawn out the poison from this particular wound… however long it would take. Failure was not an option; no space remained for the psychological self to hide in the hope I would eventually give up. You NEED this kind of commitment if you to are succeed at this. In fact you need this kind of commitment to succeed at anything in life.

I wanted to share this article and these stories because I’ve never heard anyone express before just how easy it can be deal with this root stuff… and the fact is that, like everything in life, it is as easy or hard as we say it is. It’s high time that some commentator expressed how easy it can be rather than creating a generation of endless seekers by reflecting how tough it is. It doesn’t mean that everything is gone completely – you might, or might not, retain a sense of sadness for a while, but it does mean that NOTHING is hiding in the shadows controlling your life any longer. This remaining wounds seems to have been one of the last things that was placing any continuing limitations on my own journey, and the yet greater sense of lightness that pervades following its illumination is profound…

This, I can vouch for, is a fucking fantastic thing, so if anything shared here can help you receive that too then awesome! The sixth paragraph of this article is really the meat of the story here…

The bottom line is that if you are EVER still experiencing ANY emotion that falls into the realm of anger (which includes subtle frustration), or hurt, or suffering, or victimhood, or helplessness, or for that matter anything that is not at its core purely loving… then you’ve got some shit still hiding away that you’re yet to see. Time to man up and get down and dirty!