Insect Stings and Bites – What To Do & What To Expect 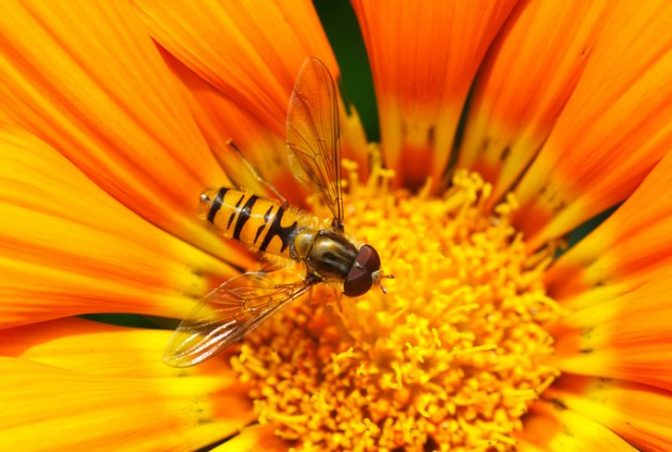 They can produce rather painful bites, grabbing on with their mandibles and pivoting around, producing blisters that can take over a week to heal. The most common treatment is with cold packs and maybe pain medicine. In the event of a severe reaction, a good antihistamine is indicated.

There are over 20,000 species of arachnids present in North America, and relatively few
of them are dangerous. Those that are, are spiders that bite and then introduce venom into the wound, such as the Black Widow and Brown Recluse. The Black Widow has the worst bite of those present
in the United States is rarely painful immediately, but the reaction becomes apparent within an hour. Symptoms include muscle cramps, numbness, headache, vomiting, and fever. More often than
not, in healthy adults, the reaction will pass in two days. However, in the case of children or the elderly, or an unhealthy adult, the reaction can be fatal. Pack the wound with ice, and get the victim under competent medical care immediately. Brown Recluse bites are a little tamer. The first symptom, a painful red blister surrounded by a blue-white “bulls eye” discoloration, appears from one to five hours after exposure. Eventually, the victim will develop fever, chills, weakness, and a red skin rash, with severe tissue damage at the bite site. Consultation with a competent physician is advised. In the meantime, apply ice. If there is an underlying allergy, then the reaction should manifest itself within half an hour.

Most scorpions in North America are more-or-less harmless. The average sting may cause local pain and swelling, but that’s about it. An antihistamine, a pain medication, and a cold pack are about all the average victim needs. Certain species in Arizona and New Mexico, such as Centruoides sculptuatus, have a sting that causes immediate and severe pain and swelling, followed by numbness. At times, the injected toxin can cause respiratory failure, requiring CPR and immediate medical attention. Atropine may be used if respiratory difficulty, muscle cramps, or blurred vision occur, but narcotics increase the toxicity of the sting and should be avoided.

Apply warm water (as warm as the patient can stand) to destroy the poison, and irrigate with soap and clean/sterile water. Oral antibiotics may be used if available, due to the likelihood of infection. It is worth noting that such stings do not come from Ictalurid catfish, which are the ones commonly pursued as game
fishes.

The wounds tend to bleed noticeably and have pieces of the fish’s tail embedded, increasing the likelihood of infection. Pain generally increases over the first hour or so after stinging. Immediately rinse the wound and remove any visible pieces of the tail, as these will likely continue to release venom. Then, apply hot water (as hot as the patient can stand) to destroy the toxin. Once the tail fragments have been removed and hot water has been applied, the wound can be closed and elevated. If the wound is still dirty, leave it open and periodically apply more hot water. Assume shock, since these wounds can be VERY painful.

These animals have stingers in their tentacles called cnidae which cause anything from prickling to
severe burning, shooting pain. Pour ocean water on the wound. Then try to remove the tentacles with gloved hands. Then, pour alcohol (or preferably formalin, if available) over the affected area. Ammonia or vinegar (or even urine) can also be used, but are not as effective as urine or alcohol. However, pure water
should not be used. Powder the area with baking powder or flour or talc, and then gently scrape the mess off without cutting the nematocysts. Finally, apply a topical anti-inflammatory such as Hydrocortisone as needed.

These may be prevented by the use of insect repellant and mosquito nets, as needed. The bites rarely
cause severe injury, but can be annoying as hell. A topical agent such as calomine lotion or Benadryl can be used for temporary relief, or oral antihistamines or pain medication in severe cases.

Mosquito-borne diseases have been more-or-less eradicated within the United States, but are a concern abroad. Malaria (carried by mosquitoes of genus Anopheles) can be prevented by weekly use of chloroquine or mefloquine weekly while in a hazardous area along with use for a certain period before and
after-ask your doctor. (Note: Malaria was spotted in some areas of Texas in 1997. This indicated that if mosquito abatement efforts are interrupted for any length of time, there could be a resurgence of the disease. Yellow fever is fairly severe, but vaccines are available that are quite effective and long lasting.

Stings from these insects tend to be instantly painful, with lingering pain. Relief can be found with cold packs and a topical anesthetic. In the event of more severe pain, an oral pain reliever is also recommended, along with benadryl to treat delayed swelling. Immediate swelling is a sign of a possible severe allergic reaction, and should be given an antihistamine and monitored for a possible asthma attack or shock.

In all of these cases, allergic reactions are possible, and antihistamines should be a part of the first-aid kit in anticipation. In addition, if a member of the party is known to be allergic to any of these, injectible epinephrine and training in its use are also advised.