Is Another Gas Giant Lurking in the Outer Solar System? 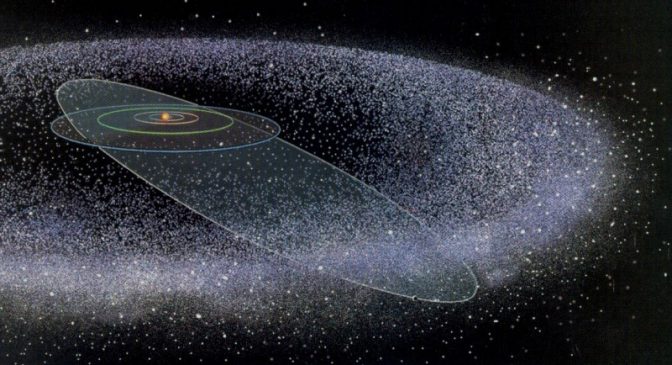 (Era of Wisdom) According to a new study, a 5th “Gas Giant” may have once orbited our sun.

Astronomers already theorize that undiscovered large planets exist in the outer reaches of our solar system. Could this 5th gas giant be one of them?

The theory is derived from an anomaly in the Kuiper Belt region of icy objects, where Pluto is located.

The Kuiper belt is home to other newly discovered dwarf planets such as Orcus, Ixion, Quaoar, Varuna, Haumea, Eris and Makemake.

This is a model of the dwarf planets’ orbits within the Kuiper Belt.

The anomaly in this region is a dense node of objects, asteroids, and celestial bodies locked together in the Kuiper Belt. It is referred to as the “Kuiper Belt Kernel.” It is an anomaly because there is nothing quite like it in the known solar system.

This is an image of the kernel:

“The Kuiper Belt is a perfect clue to understanding how the solar system evolved since its formation,” said author of the study, Dr. David Nesvorny, an astronomer at the Southwest Research Institute in Boulder, Colorado.

Nesvorny created computer simulations of the early solar system, which suggest the cluster was once a satellite of Neptune and locked into an orbit around it.

Something drastic must have happened to break the Kuiper Belt Kernel from Neptune’s orbit. Nesvorny believes a planet “bumped Neptune” and broke the cluster away from the planet.

It is theorized that this large 5th gas giant no longer exists within our solar system. This alleged catastrophic collision with Neptune is thought to have thrown the planet out of the solar system.

Despite the theoretical nature of understanding our solar system’s past, perhaps this can provide an explanation: earlier this year it was reported that a large planet may be lurking in our solar system — so far from the sun that we haven’t seen it yet.

There is an unexplainable gravitational pull on Kuiper Belt objects at a certain point in our solar system. There is no way to explain this mysterious pull, outside of theories of a large planet.

Planets like Sedna and 2012VP113 are in a new class of dwarf planets with highly elliptical orbits, reaching distances of 30x the distance of Pluto from the Sun.

According to Space.com, “The newfound celestial body, called 2012 VP113, joins the dwarf planet Sedna as a confirmed resident of a far-flung and largely unexplored region scientists call the “inner Oort Cloud.” Further, 2012 VP113 and Sedna may have been pulled into their long, looping orbits by a big planet lurking unseen in these frigid depths.”

This is the orbit of Sedna. The red one is Sedna and the pink orbit closest to Sedna is Pluto.

Is it possible that one of the theoretical planets pulling on the Sedna-like dwarf planets is the planet that broke the Kuiper Belt Kernel away from Neptune?

In any case, there’s something pulling on the Sedna-like planets. Something once broke the Kernel away from Neptune’s gravitational pull — and very interesting forces are at play that we do not fully understand yet.