John McAfee Just Announced the Most Private Smart Phone Ever: Here’s How it Works 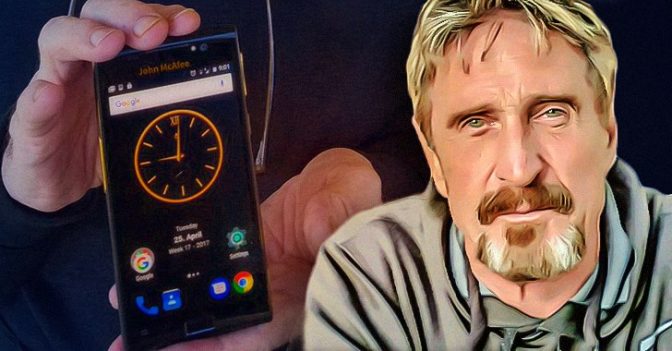 (ANTIMEDIA) — In an exclusive interview, head of MGT Capital Investments and former presidential candidate John McAfee spoke with Anti-Media Thursday night about an issue at the forefront of many people’s minds these days: privacy.

McAfee, a pioneer in the realm of antivirus software, has a new product coming to market later this year that takes on the subject of personal privacy with an item that’s become a significant part of most people’s daily lives — smartphones.

“There are very few apps that do not ask for excessive permissions,” McAfee told Anti-Media radio host S.M. Gibson, pointing out that long before the public was aware, technology companies were recording and selling customers’ data to third parties through their products.

It’s the user’s agreement to these permissions that makes it all legal, notes McAfee, though by agreeing, most apps get access to parts of the person’s phone that have nothing to do with the apps’ function. As he explains:

Listen to Anti-Media’s conversation with John McAfee in full below:

“If you have a Bible reading app, which basically takes text and synthesizes it and it’s a text and speech synthesizer, all you need access to is your speaker. And yet most of those apps, at least when they first came out, wanted access to your camera, your microphone, your email, your contacts, your wi-fi, Bluetooth, and your geolocation. They wanted to know everything that you did. They wanted to know what you were Googling, what you were searching for. And you could access all this if you, as the user, agree to those terms.”

McAfee points out that most of these apps are free because people will be more likely to download them. The more downloads, the more data software companies get access to — data that, again, can be sold to third parties.

McAfee considers this practice to be innocuous since users have the choice of whether or not to agree to the terms. But the intentions of others, such as “black hat” hackers, are anything but.

“They want to steal from you,” said McAfee. “Your identity, your credit cards, your Bitcoin wallet, they want to know what your social security number is. The password for your bank account. And so most people are completely unaware their movements are being monitored.”

The problem, McAfee says, is rooted in the software.

“Do you think that when you power down your phone, that it’s actually powered down?” McAfee asked the Anti-Media audience Thursday. “I would say that 25 percent of you, everybody who’s listening, have malware that intercepts the software function that calls the power down. They intercept it, make the screen go blank, turn off the lights, and you think your phone is powered down. But it’s not. It’s still alive, it’s listening to you, transmitting information.”

The hackable nature of software means the battle between security companies and hackers is always “seesawing ” — sometimes the black hats are up, sometimes it’s the companies. This is because the battle is “software fighting software, and all software has flaws.”

That’s why encryption services like Signal are largely useless, McAfee says, because there’s no one in the middle actively listening. Now, data is mostly recorded via keystroke and then viewed at terminals at hard locations.

The key, according to McAfee, is to go back to the hardware and root phone functions in hard switches — which is exactly what MGT is doing:

“With our smartphone, with our privacy phone, we have first and foremost put into the hardware all of those features which are required to guarantee that if I choose not to want people to know where my location is, that they cannot do that. Period. No matter how much your phone is hacked.”

McAfee’s privacy phone will also include an “anonymizer” function that prevents search engines like Google from seeing what users are looking for. Additionally, the phone will have a detector for Stingrays — devices that disguise law enforcement departments as legitimate cell towers and can even send pushes to connected phones, something McAfee considers a form of malware.

The phone will even include a function that will randomize your location. This could come in handy in a slew of situations, says McAfee, such as for someone trying to escape an abusive spouse or — if you’re like him — someone who trashes the F.B.I. and the corporate media on a regular basis.

“I have never heard a more naïve understanding of human nature,” the MGT head told Anti-Media.

You wouldn’t tell absolute strangers intimate details of your daily life, McAfee points out, so why would you make all that information available digitally? Wanting privacy has nothing to do with being a bad person, he says; it’s simply human nature.

“Everyone has a different privacy filter for every human being. I want you to think through this, and look at yourself, and tell me I’m wrong. Because I’m not. Given that, why on Earth would our brain power be allocated to such a sophisticated function of privacy? It’s called self-preservation.”

Asked to comment on how he feels about whistleblowers like Edward Snowden and Julian Assange, McAfee said that in the end, it comes down to whether or not you want to actually know — and be conscious of — the fact that you’re constantly being spied on:

“Would you rather live in a world where you’re kept in the dark, and the government says we’re safe because no one knows anything? Or would you rather live in a world where there are people like Julian Assange and Edward Snowden, who I’m sure struggle with this issue, because they’re putting their life on the line. Their own security on the line. And say, do we as American citizens have the right to know, for example, that the N.S.A. is spying on us? An unconstitutional act. Do you want to know that or not? That’s all I’m saying.”

Or, in other words, McAfee said Thursday:

People interested in purchasing a privacy phone can go to mgtci.com and get on the waiting list. The price is around $1,100, which McAfee admits is expensive.

“My apologies,” he says, but “to change a paradigm in hardware isn’t cheap.” In any case, McAfee says, there’s a far more pertinent question at stake than money: