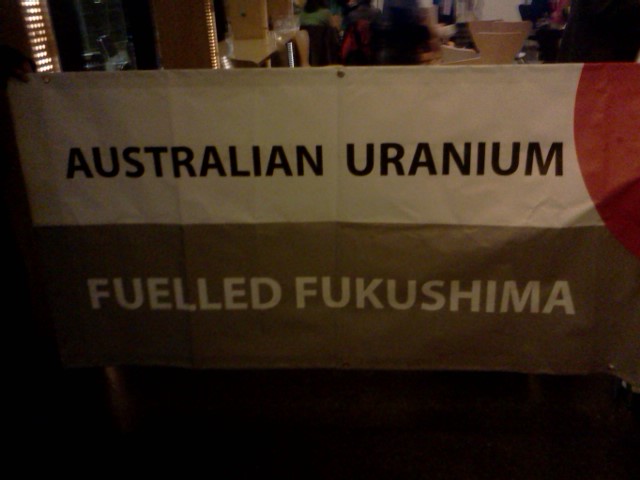 I feel it befitting to begin with a reminder of how destructive the Nuclear legacy is and the death we are faced with if we refuse to confront our own shadow. One thing that struck me at the event, was there was hardly any media presence. Mr. Kans visit was funded by ticket sales. I myself learnt of his visit on facebook, which is where I saw an article about his tour of Australia. I decided immediately I must attend and see if there were any Melbourne dates. Mr. Kan met with a wide variety of persons whilst in Australia, indigenous, organisational and citizen/ activist.

On 29th August I attended a presentation hosted by the Australian Conservation Foundation ‘The Naoto Kan Fukushima Event’ at the city of Melbourne Bowls Club. This presentation covered the reality of Australia’s karmic relation as source of the uranium that fueled Fukushima. We got to hear about Australia’s nuclear legacy from the Medical Association for the Prevention of War and ICAN International Campaign to Abolish Nuclear Weapons. We meet a third generation indigenous descendant, an Arabana community man from Katrithunder (Lake Eyre)named  Peter, who’s grandmother was directly impacted by the Maralinga tests in the 1950’s,and died of exposure to radiation at 30. We hear how 70% of the world’s uranium mines are on Indigenous lands world over. We hear of heartache as a family is torn apart from their ancestral burial grounds and can never return to their native village in Fukushima. And we hear from the halls of power at the time of the event from the former head of Japan, former Prime Minister Mr Naoto Kan.

We meet Peter first. He tells how he lost his grandmother at 30 after the 1950’s testing “this industry is a dead end industry…it’s not fair a handful of people decide this stuff can be dug out of the ground and used”. Peter visited Japan  and the Fukushima region twice and says “I’ve seen all the changes in the vegetable matter and trees- even before Fukushima, around the  reactors.” He told us how in a desert region, 40,000,000 litres of water are used to wash the stuff they bring out of the ground”, demonstrating the stupidity and results of practices based in power relations to feed the infrastructures of the dirty energy industry. Dr Margaret Beavis for the Medical Association for the Prevention of War, ICAN reminds us of the “Do no harm rule”, the doctor’s oath, and talks about the horrors of war from a medical standpoint.  In the post WW2 era “atoms for peace- nuclear power was promoted all around the world as electricity too cheap to metre”, absolutely astounding  post Hiroshima and Nagasaki. Any “low dose of radiation is not safe- living within the proximity of reactors increases cancer rates. Fukushima left 130,000 displaced.  Chernobyl displaced 80,000 people”. We learn about the acceptable risk levels  of radiation exposure  and their increase post Fukushima, and how over a five year period 20 millisieverts can mean cancer for children. “The nuclear industry has many negative side effects even without the catastrophic events of war or meltdowns. Costs include  production, manufacture, health, storage etc. It takes 100,000 years for high level waste to decay and there are no storage facilities in the world for high level waste” Dr. Beavis said. “It’s high time Australia stop being  the dealer and supplier- if nuclear was a medicine it would of been taken off the shelf years ago”.

In ‘War on Health Why diplomacy is better that warfare’ (Medical Association for the Prevention of War booklet (1), page 9 states there are “17,300 nuclear weapons in the world. Nine countries with weapons, others developing capacity”. The effects of nuclear go way beyond our generations to affect the genetic and atomic lineage of all future living beings and kingdoms of earth (mineral, plant, animal and  human). The Nations states who wield this horrific power of death include “Russia 8500, U.S.A 7700, France 300, China 250, U.K 225, Pakistan 100-120, India 90-110, Israel 80, North Korea 40, totaling 17,300” (1. p9). That is an awful lot of minions serving an Armageddon beast, which has grown out of the collective wars of our ancestors, and  of our global ancestry. It is high time we all grow up and learn to live with our differences without destroying all life on earth and to sort out our mass psychosis and suicidal tendencies. The history of warfare unfortunately is full of the use of innovative technologies and the abuse of such. I read recently that Japan was ready to surrender before the bombings, and that a very small minority wanted to see the effects of their masterwork effectively murdering  tens of thousands, just ‘to see’.

We hear traditional Japanese Shamisen and Shakuhachi flute by Noriko Tadano and Anne. We hear of a family lineage, again broken, and the heartache over losing one’s ancestral lands, cemetery and access to ones ancestors for prayer. We hear of the death of dreams of Noriko’s father who wanted to become a fisherman when he retired and relax to the village. “ We can’t go back to the village to prayer for our ancestors” says Noriko. Noriko plays a traditional Fukushima Folk Song and sings. She holds the heart bridge for the event here today, for her it is a close experience. For a moment we live in the other world. The old world Japan, transported through time and space by Noriko’s playing. We see photos of the region on the projector. Topsoil covered in plastic ready to transport away to ‘somewhere’ a magical land that will be protected for hundreds of year. We see photos of  Fukushima before, and bus shelter artwork. We see how beautiful a  country it was before  and we see the melted reactor site.

A performance by Noriko can be viewed here , from 2011 before Fukushima, Japanese Summer Festival 2011 – Noriko Tadano

We are introduced to the former Prime Minister of Japan Mr Naoto Kan. Mr. Kan has a translator present, I am including the transcript I recorded on my phone for you to listen to directly, minus the first two or three minutes. I present here only a summary.

We hear of the exact moment that a phone call came through about power loss in the cooling systems, at 2.46pm March 11 2011. “In power plant if cooling functions are not  restored, water will evaporate….meltdown  and melt through occurs. Reactors 1, 2, 3 experienced meltdown and through and 1,3,4 suffered hydrogen explosions” Levels were that severe that exposure would lead to death within 4-5 minutes says Mr. Kan.

As Prime Minster, Mr. Kan had insight as a trained Physicist Major, he could understand acutely the affect of such events and has since had a 180 degree turn away from support of the nuclear industry to become  an educator about the dangers of nuclear, discussing  the “fundamental reappraisal of the risk and role of nuclear power”. Mr. Kan had consultants at the time working on worst case scenarios and was faced with the possibility of evacuating the whole of Tokyo. He says “ I really think it was the grace of god that led to the prevention of the worst case scenario”. Tokyo’s population is 50,000,000. There is 160,000  still in evacuation said Mr. Kan.

Mr. Kan tells us there are 54 reactors in Japan. The current government is trying to restart as many as it can. 70-80% of people are opposed to nuclear power and want it phased out. It will not go back to prior usage levels he asserts. Mr. Kan has been deeply touched and shocked upon speaking to many indigenous persons who “expressed their sorrows about the uranium mined on their land (Kakadu), being used at Fukushima in the fuel rods. He felt contemporary Japan would only feel the sorrow of this event   if it was in their own land and affected there people. He was able to relate and understand how the uranium is “part of their land, their body and their feeling”. Many have been opposed to Australia’s mining  and export of uranium for a very long time.

Post Fukushima construction costs for new nuclear reactor plants have doubled with more reactors being  moved towards decommissioning. Yet China had 20 operating  and with economic growth and population. 20-30 new reactors  are planned some in construction.  Mr. Kan has concerns over population density, should an accident occur. He is not so sure of risk containment and management anymore, despite the best of intentions.

Ultimately it all comes back to the development of weapons 80 years ago. Mr. Kan says “weapons are able to destroy all humanity, they are not for humanity”. I am reminded of J Robert Oppenheimer’s  famous quotation  of the Bhagavad  Gita “Now I am become death…. destroyer of worlds”.

At his point I would like to ask the readers have you ever witnessed the footage of the simulation of all the atomic and nuclear testing since it began? Here is a link created by a Japanese artist, the rate accelerates as we get further into the 20th century.

Below I list resources about the Fukushima event and the recovery of Fukushima. Please take the time to watch and listen. See (5 &6).

Mr. Kan says “this energy is not something that can make us happy. Plutonium was a new energy we discovered – an atomic element and was what was dropped on Nagasaki”. He told us about cesium and plutonium. “Human being and living beings  are here, part because they coexisted in harmony with nature until now”. “Human beings and plutonium cannot coexist. In these 80 years [since the development and discovery of Plutonium] we have had Hiroshima, Nagasaki, 3mile Island, Chernobyl, Fukushima and other disasters also. Although I am no expert it is clear, human beings and nuclear energy cannot coexist”.

Dave Sweeney from the Australian conservation Foundation summarized and thanked Mr. Kan with a succinct “ cautionary tale for our often irresponsible times”. He tells us “the nuclear age will end because we ran out of patience…it will end because we embraced renewable…because more people look at, respond to and react to the situation”. May our post Fukushima world be nuclear free, may our will, be towards life, love and harmony for all living beings. I invite you now to enter a contemplative space, a garden which I composed as part of my Honours degree last year. It was dedicated to Fukushima. It is in the spirit of Deep listening and embodies the notion of Forest Bathing which is a restorative therapeutic practice being pioneered in Japan and Korea but that is just a representation of age old knowledge of the Oriental Masters who understood the Dao. May we again find the Way.

For those interested in earth restoration, a friend recommended  the book Earth repair to me which has a chapter on rehabilitation of nuclear radiation and fallout  the natural way. This book I recommend to those who are involved in conservation, rehabilitation and education. Earth Repair: A Grassroots Guide to Healing Toxic and Damaged Landscapes Paperback –by Leila Darwish (3).

I would like to end with a contemplation for all beings. It is not only for ourselves that we work, but future generations, indeed future incarnations of ourselves and all beings. May we again walk the way.  Inspired by Avalokiteshvara, the great Boddhisttva being also known as Quan yin in the feminine principle, who hears the cries of the world and responds.

Special thanks goes out to Meri Joyce for her translation work.