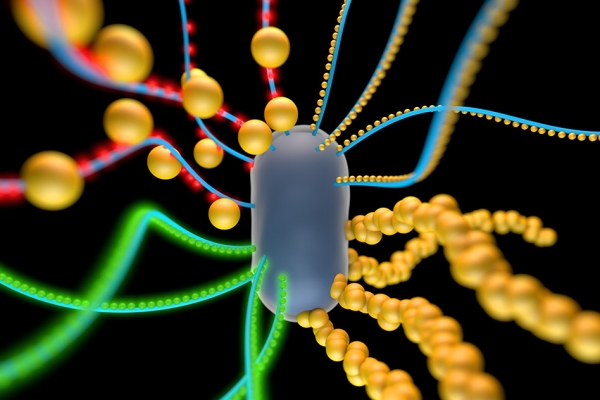 An artist’s rendering of a bacterial cell engineered to produce amyloid nanofibers that incorporate particles such as quantum dots (red and green spheres) or gold nanoparticles. (Photo : YAN LIANG/ Massachusetts Institute of Technology )

This is quite remarkable. I came across this post by Stephen Cook at the Golden Age of Gaia about some recently published MIT research.  The possiblilty to incorporate gold nanoparticles and even quantum dots to create “living materials” is quite astonishing.-JD

“Researchers at Massachusetts Institute of Technology (MIT) have created a material with the properties of both living and non-living things using E.coli bacteria.

Their study paves the way for futuristic self-assembling materials that could be used in solar cells and biosensors.

Researchers led by Timothy Lu, an assistant professor of electrical engineering and biological engineering, have shown that it is possible to incorporate gold nanoparticles and even quantum dots to create “living materials.” These smart materials will be able to only respond to the environment like a living cell but even develop complex networks required for man-made applications.

For example, self-healing material could help absorb and conduct electricity in solar cells. These materials could also spot tears and fix themselves without an external command.

“Our idea is to put the living and the nonliving worlds together to make hybrid materials that have living cells in them and are functional,” Lu said in a news release. “It’s an interesting way of thinking about materials synthesis, which is very different from what people do now, which is usually a top-down approach.”

To develop the material, researchers essentially hijacked “biofilm production” to force bacteria to use gold nanoparticles and quantum dots. Biofilms help bacteria- like those in dental plaque – adhere to surfaces.

E coli bacteria produce biofilms that contain “curli fibers.” These fibers are made of a chain of protein subunits called CsgA and help the bacteria attach to the surface.

For the study, researchers tweaked E.coli’s natural ability to produce CsgA and created a genetically engineered strain that could produce CsgA only under certain conditions- such as in the presence of molecule called AHL. This helped researchers control the biofilm production of the bacteria.

In the next part of the study, researchers engineered E coli to produce CsgA hooked with peptide containing the amino acid “histidine.” The production of this tagged CsgA was controlled by limiting the amount of another molecule called aTc.

When gold nanoparticles are added into a mixture of tagged and untagged curli fibers, the histadine-containing fibers grab these particles and create a network of gold nanowires. In the future, these networks could be used in advanced computers and biosensors.

Researchers even demonstrated that the bacteria could evolve and communicate with other bacteria to coax them to produce these histidine-tagged CsgA.

“It’s a really simple system but what happens over time is you get curli that’s increasingly labeled by gold particles. It shows that indeed you can make cells that talk to each other and they can change the composition of the material over time,” Lu says. “Ultimately, we hope to emulate how natural systems, like bone, form. No one tells bone what to do, but it generates a material in response to environmental signals.”

Similarly, researchers used SpyCatcher, a protein and SpyTag, to create curli fibers that could weave quantum dots in the biofilm.

The study was supported by Office of Naval Research, the Army Research Office, the National Science Foundation, the Hertz Foundation, the Department of Defense, the National Institutes of Health, and the Presidential Early Career Award for Scientists and Engineers and is published in the journal Nature Materials.”

The Future is here