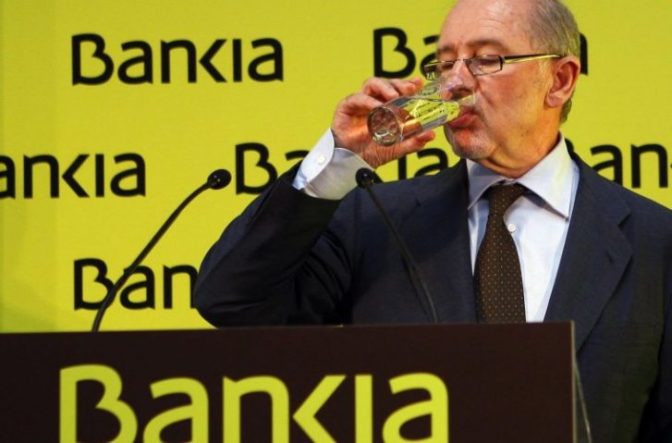 Corrupt banking is nothing new, but it’s incredibly detrimental, which is why, in many countries it is taken seriously by their respective governments. It harms the livelihoods, economies, and democracies of countries. It ensures poor countries remain poor, promotes conflict and instability, and kicks weak environments to the ground.

The most recent example of corrupt baking comes out of Spain, where former head of the International Monetary Fund (IMF) Rodrigo Rato received four years and six months behind bars for embezzlement during his time heading Caja Madrid and Bankia, which were both having difficulties at the time.

Though this is not Rato’s first time being called out for corrupt banking, it marks necessary justice finally being met, this time for misusing €12m between 2003 and 2012. The news sparked outrage among the people of Spain, since it was found to have occurred during a time of immense financial struggle for the country, with banks being given millions in taxpayer dollars. Bankia ultimately became nationalized, receiving €22 billion in public money.
Despite being sentenced, Rato remains free pending a potential appeal. This is likely due to his powerful connections, as he is also the former Spanish economy minister.

The details of the corruption reveal a prime example of elitists misusing their power for personal gain, forgetting their moral compass and dedication to promoting and providing a better environment for people who rely on them to thrive in. For instance, Rato was one of 65 people within the banking system accused of having paid for personal expenses with Caja Madrid and Bankia credit cards, but never declaring them to tax authorities, or explaining the circumstances. Such expenses include petrol for their cars, supermarket shopping, holidays, luxury bags, and parties in nightclubs.

According to the report, “Thousands of small-scale investors lost their money after they were persuaded to convert their savings to shares ahead of the flotation of Bankia in 2011, with Rato at the reins. Less than a year later, he resigned as it became known that Bankia was in dire straits.”

Then, Christine Lagarde, who took over from Strauss-Kahn and is the current IMF chief, was found guilty of negligence in her handling of a long-running fraud case. Lagarde was not found negligent in her decision to seek an out-of-court settlement with tycoon Bernard Tapie, but was found so regarding her failure to contest the award to him of about 400 million euros, which then led to a misuse of public funds. The verdict was infuriating for many, as Lagarde was able to escape true punishment, and instead kept her job.