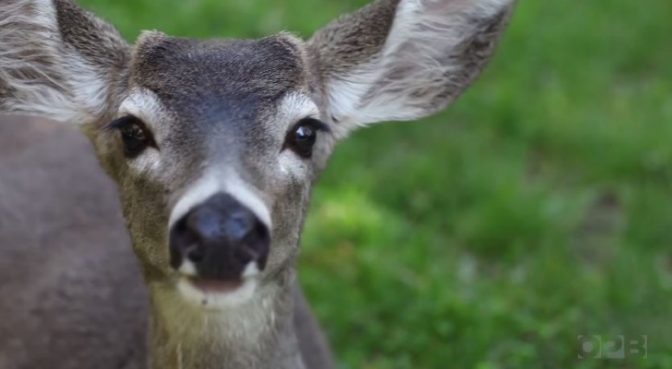 Richard Davis, known to his local community as “Pa Butt,” is a medical marijuana grower in Southwest Oregon and co-owner of the Applegate River Lodge. For 23 years he’s spent his time carefully tending to his plants, running the infamous lodge (as seen on Fox’s reality show, Hotel Hell), and raising a few animals along the way, including ‘Sugar Bob,’ a young deer that Davis has been raising on goat’s milk.

In a video published by OPG (see below), Sugar Bob is seen following Davis as he works, nibbling the marijuana leaves that fall to the ground. Deer are devout vegetarians, and are known to feast on outdoor cannabis plants, which can be troublesome for some medical marijuana growers. Fortunately, this isn’t the case for Davis.

“When I’m down here, he either stays pretty close to me, or he’ll go in the trim room and cleans up all the [excess cannabis] on the floor, [until] he’s ready for a nap,” David told OPG.

“I had a friend say to me, ‘that deer, that’s not right, other deer are out there getting chased by cougars and here’s your deer, laying on your bed, eating a big bud,’  and as he’s laying there, he’s getting sleepier and sleepier,” Davis laughed. “I had to crawl into bed with him and sleep for a few hours.”

But Sugar Bob wasn’t Davis’s first pet deer, he explains. The first Sugar Bob was a companion for his old dog Bacon, 14 years ago. Today, a similar cycle is playing out, as Sugar Bob is a great friend to his Beagle, Trouper D.