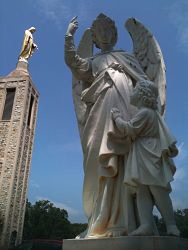 Note from the Editor – I recently came across this amazing research done by my good friend Justin Mazza on the history of human origins. I will post a part of this article here with a link at the end to the original article and I think you will find this very informative and a terrific read. – JD

Have you ever wondered about the origins of modern humans?

Where did we come from, how did we originate and what was this “missing link” element all about anyway?

Somewhere back in the early 2000’s my curiosity got the better of me.

Many of you already know that I have read well over 700 books beginning around 1997.

I mainly read personal development books back then because that was what I was in to.

After that I read a lot about religion and spirituality and channeled messages like Abraham-Hicks, The Seth Material and A Course in Miracles.

From there I delved into metaphysical topics like numerology, tarot cards, dream interpretation, psychic attunement and so on.

As my thirst for knowledge expanded, so did my reading materials.

One day when I was perusing through Border’s, or was it Barnes and Noble? I don’t remember, but I do remember coming across a book that would forever change my perception of reality.

That book was titled: And the Truth Shall Set You Free by an Author named David Icke.

The book was incredible and it just made me hungry for more information from this David Icke fellow.

So much so that I ended up reading and buying every David Icke book that I could get my hands on even if that meant going to multiple book stores in one day.

Most David Icke books are quite large and I admit to skipping through some chapters to get to the more juicy stuff which his books have plenty of.

As a result, many of the questions about why the world is the way it is (The human matrix not so much the natural world) were answered.

Granted, I am the first to tell you to not believe everything you read. I also will be the first to remind you to bring your full conscious awareness with you at all times and not to just believe something just because you read it or were taught it.

I really began to connect the dots about the unnatural nature of our human reality through the brilliant work of these authors.

(Almost of these authors will tell you that they don’t get 100% of the information right all the time).

One area that really peaked my interest was the creation of modern man and modern civilization and the whole Extraterrestrial intervention thing.

The common belief is that man evolved from ape, yet there is still that pesky “missing link” factor that no one has officially solved yet.

Eventually I stumbled upon the idea that modern man was not created by happenstance.

One story I read stated that modern man is a creation of Extraterrestrial intervention. For the record, when you hear extraterrestrial don’t think “Little green men,” think more human looking.

Just like in Star Wars or Star Trek, most of the characters were in fact human even though they came from planets other than Earth.

The first story about extraterrestrial intervention I read goes something like this.

An old ET civilization had eroded the atmosphere on their planet Nibiru. As a result of the crucial “ozone layer” having a giant hole or weakness to it, the inhabitants had to find a way to fix it or they would lose their planet.

After many years, or decades or longer they finally found a way to fix the gaping hole in the ozone layer.

The key ingredient was gold, or goldust.

They found out if they could condense the gold into a fine powder and spray it into the atmosphere than this would indeed fix their ozone layer debacle.

There was one major problem though.

Nibiru had almost no gold on it.

Two brothers, Enki and Enlil – who happened to be the sons of the King and Queen, had the job of locating gold on a nearby planet.

After some time they found one planet that was rich with gold.

After some time of exploring Earth they were able to find some areas that were particularly rich with gold. One of those areas is located in South Africa in which to this very day there are very old, long and deep perfectly made tunnels that no one can explain who made them.

After the scouting mission to Earth, many fleets of Nibiruans came to Earth to begin mining for gold.

At one point they set up a way station on Mars because of Mar’s low gravitational pull meant they could take larger loads back to Nibiru.

No one knows for sure how long the Nibiruans did their own mining for gold, but one thing is for sure. They eventually rebelled against it.

The Nibiruan workforce were tired of working in those hot, humid, mines – their bodies were not built for the harsh conditions of the Earth.

Apparently Nibiru had a consistent year round temperature, neither too hot or too cold.

Since Enki and Enlil were in charge on the Earth mission they had to come up with a plan before their workforce bailed on them.

Enki being the Scientist of the two decided to make slaves out of the humans that were already on the planet at this time (Homo Erectus).

The Nibiruans viewed them as mountain people. Kind of slow, kind of quiet, kind of primitive in their eyes.

They created a clone (Adamu) which was a mixture of their DNA with that of the Homo erectus creature that already existed on Earth when they arrived.

After some time of playing God with the genes of primitive man they eventually were able to create a slave force to mine the gold for them.

In fact, the Nibiruans created some humans that were almost a complete genetic match to them.

For the record, it is forbidden to interfere with the Inhabitants on any planet by spacefaring beings like the Nibiruans. And altering DNA is a big cosmic “no-no”.

Professor Hermann Oberth, the father of rocket science, openly believed the planet Earth to be watched by beings from other planets. Indeed, ancient records also confirm that visitations were a relatively common occurrence.

Generally, the visitors respected Earth’s sovereignty and have conducted their researches without attracting attention or attempting to interfere with Earth’s indigenous tribes.

Eventually the children of the Gods (The direct genetic descendants) later became the Kings and Queens of old and everyone else got to be the peasants.

Humans are really an “accidental” by- product of an ancient colonization of Earth by the Nibiruans.

If you think this idea is made up, or you are wondering where the proof is, it was all written in stone on Sumerian Clay Tablets. The same tablets were we get much of the Old Testament from.

Yes some of the facts were lost in translation, but the story still holds true, that Earth was visited by spacefaring beings, Those who came from the sky as it is written and were referred to as gods because of their knowledge, technology and creative abilities.

Since the 1970s, when more scholars became attracted to the Sumerian translations of clay tablets polluting the basements of many museums of the world, a whole new wave of information started to emerge.

Suddenly we were exposed to a whole new civilization that preceded all others, which spoke a different language and made references to times before their own from where all their knowledge was derived…

For the rest of the article please visit http://www.mazzastick.com/modern-human-origins-aliens-and-atlantis/