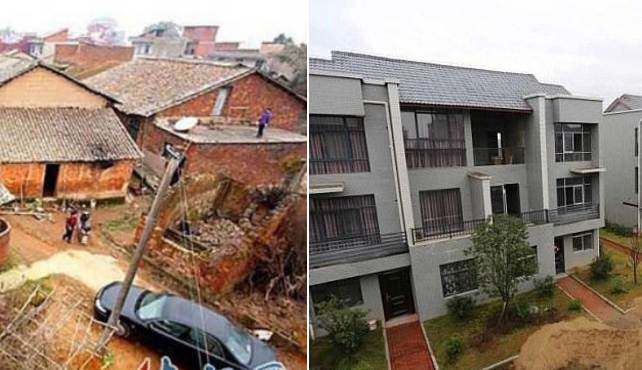 Xiong Shuihua, a Chinese multimillionaire, bulldozed his old decrepit hometown to build luxury condos for everyone, for free, as a humble “thank you.”

Some stories just put a smile on your face. So often our image of rich business moguls is associated with egocentric, narcissistic men who greedily spend their fortunes on penthouses, speedboats, and private jets.

But Xiong Shuihua, a Chinese multimillionaire who earned his own fortune in the steel construction business, has shattered this stereotype, demonstrating philanthropy at its best and proving the existence of “good” in places often seen as grim.

Xiong Shuihua was born in Xiongkeng village in the city of Xinyu, southern China, and said that his family had always been well looked after and supported by community residents during his childhood.

So, after making his millions in the steel industry, Shuihua opted to repay his debt to his childhood community by “updating” the locals’ living spaces.

Xiongkeng village before the overhaul.

Xiongkeng village after the overhaul; Photo credits: The Daily Mail

Five years ago, the area was considerably run-down, with most locals living in the most basic of homes.

Today, however, the area has been completely transformed, and now 72 families are enjoying a new quality of life in what can be considered “luxury flats.”

Furthermore, 18 families who were particularly kind to the businessman were given villas of their own, in a project costing close to $7.4 million.

After moving in, he even promised three meals a day to the older residents and people on a low income to make sure they could get by.

“I earned more money than I knew what to do with, and I didn’t want to forget my roots,” he told the Daily Mail; “I always pay my debts, and wanted to make sure the people who helped me when I was younger and my family were paid back.”

Xiong Shuihua’s incredibly selfless gesture is the sort of deed that could really create #change in our world. If, for example, the top percentage of wealthy people around the globe decided to allocate even the smallest portion of their wealth for philthanropistic causes such as this, the amount of people whose lives would change for the better would be monumental. Let’s hope we keep seeing more of this taking place in our world.

Do you know of any other inspiring philanthropy stories? Share with us in the comment section below!