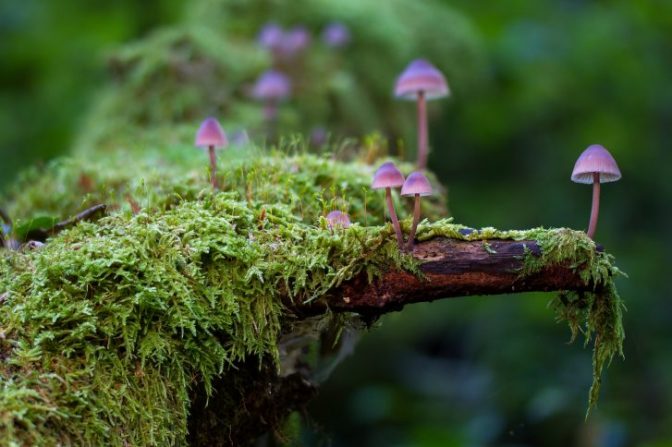 The delicious flavor of mushrooms intrigued the pharaohs of Egypt so much that they decreed mushrooms were food for royalty and that no commoner could ever touch them. Thus they assured themselves the entire supply of mushrooms. In various other civilizations throughout the world, including Russia, China, Greece, Mexico and Latin America, mushroom rituals were practiced. Many believed that mushrooms had properties that could produce super-human strength.

France was the leader in the formal cultivation of mushrooms. Some accounts say that Louis XIV was the first mushroom grower. Around this time mushrooms were grown in special caves near Paris set aside for this unique form of agriculture. From France, the gardeners of England found mushrooms a very easy crop to grow which required little labor, investment and space. Mushroom cultivation began gaining popularity in England with more experimentation with spawn.

In the late 19th century, mushroom production made its way across the Atlantic to the United States where curious home gardeners in the East tried their luck at growing this new and unknown crop. However growers had to depend on spawn imported from England, which, by the time it reached the U.S., was of poor quality. First mushrooms farmers were florists. Since they grew flowers on benches, florists could just slide mushroom beds right under their flower benches and gain a profit in growing two crops in the area of one. They also thought that mushroom growing was ideal for farmers who had access to growing their own manure and spawn. At the time skilled labor was not a necessity for mushroom growing. It was recommended to housewives as well as a source of home income. 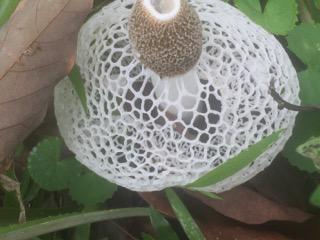 The Role of Mushrooms in Nature

Unlike plants, mushrooms cannot synthesize their own nutrition from the sun’s energy. They lack chlorophyll – the substance that permits plants to use sunlight to form sugars from the water and carbon dioxide in the air. Mushrooms therefore had to develop special methods of living: symbiosis, saprophytism and parasitism.

Most of the mushroom growing on the forest floor is intimately linked to trees by symbiosis. This association, called mycorrhiza, occurs between the root ends of a tree and the vegetative system of a mushroom. Mycorrhiza benefits both organisms: there is an exchange of nutrients, one providing to other what it cannot synthesize or extract from the soil by itself. In general, the mushroom helps the tree extract minerals and water from the soil; in exchange, the tree supplies the mushroom with sugar compounds (carbohydrates). Saprophytism is another important living method for mushrooms, especially for species that grow on lawns, on rotting wood or on excrements. Here the mushroom’s role is one of decomposition. It feeds itself by digesting the organic matter and at the same time returns nutrients to the soil.

Finally, some mushrooms are parasites. There are several kinds of parasitism, ranging from the species which attack a healthy host (tree, plant or insect) and lives on it without killing it…to the kind which attacks only unhealthy hosts, thereby hastening their death. The parasitic species are generally microscopic mushrooms.

The earth’s soil is home to large populations of natural agents that support promoting the environment. One of them is the fungi mushroom, which helps restore pollution-damaged habitats, acts as natural pesticides, and even provides a sustainable fuel

called, Econol. While mushrooms have the ability to support Mother Nature, they are also capable of promoting your own health, from helping strengthen your immune system to preventing debilitating diseases. Some benefits that you may enjoy from consuming mushrooms are:

* Improving nutrition – Adding more mushrooms to your diet may help to improve the quality of your diet.

* Optimizing digestive function – Mushrooms support your gastrointestinal health, thanks to their supply of dietary fiber and fungal enzymes.

* Antibacterial properties – Penicillin, streptomycin, and tetracycline are all derived from fungal extracts.

* Mushrooms are now gaining a reputation as superfoods. We recommend you to add more to your diet or consume them indirectly via supplements.

How Do Mushrooms Support Your Health?

Mushrooms contain long-chain polysaccharides, specifically alpha- and beta-glucans. These molecules have beneficial effects on your immune system. Did you know that medications like penicillin, streptomycin, and tetracycline are all derive from fungal extracts? Other naturally occurring compounds like fungal proteins, lectines, peptides, and laccases in mushrooms also support your immune function. In fact, studies show that mushrooms have cancer-fighting and anti-tumor properties.

Mushrooms are also great sources of protein, fiber, B vitamins (especially niacin), vitamin C, calcium, minerals, and selenium. They also contain antioxidants that are unique to mushrooms, such as ergothioneine, which according to studies is a highly powerful antioxidant; it’s produced by fungi and certain mycobacteria found in soils.

A study published in the journal, Nature, states that ergothioneine is a derivative of the amino acid histidine. The antioxidant also contains sulfur, which may help protect your DNA from oxidative damage. Mushrooms also owe some of their beneficial properties to the mycelium, a cobweb-like structure that is found in nearly all landscapes. Through the mycelia, fungi absorb nutrients from the soil. When two compatible mycelia join, they form mushrooms, which make spores. These spores, which fly away, are responsible for making new mycelia colonies.

Mushrooms are not only good for your health but are beneficial for the planet thanks to its decomposing properties and sustainable, low cost production. Here are some of these properties listed:

* Cleaning polluted soil and restoring habitats near polluting factories. Examples in China are showing a high rate of success.

* Potential source of fuel: Mycelium can convert cellulose into fungal sugar and maybe used to make mycelium base ethanol.

* Potentially curbing our reliance on plastics: Many projects are using mycelium to create a new material that can replace Styrofoam and many other contaminating materials used in different industries. 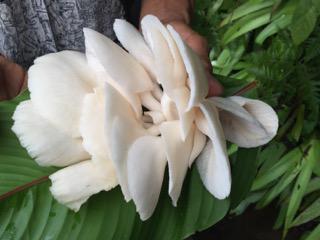 Mushrooms are fungi that can be grown as a small-scale crop, which is our goal at Jiwa Damai organic center. The fungi grow from microscopic spawn that requires moist, humid and dark conditions to turn into the fresh mushrooms. White oyster mushrooms are an easy starter-mushroom to learn the growing and harvesting process. This is the reason why we chose it to start our production, after which you can branch out and experiment with other types.

Choose a location with an air temperature of 55 to 70 degrees Fahrenheit and humidity of 80 to 95 percent. Build some plastic buckets with many holes in the sides. Cook rice straw on a slow fire for 1.5 hours, together with gypsum and let it drain for another couple of hours in a old pillow case or a cloth bag, depending on availability.

Plant the mushroom spawn on the compost once the growing medium stays at a consistent temperature of 70 to 80 degrees Fahrenheit. This temperature reduces the amount of ammonia odor in the compost to prevent killing the spores. Then spread the spawn evenly over the compost and mix it thoroughly into the medium. Place it in the buckets with holes.

Once everything is mixed and settled in the buckets, the buckets are placed into a dark space for 10 days, allowing the mycelium spread. The buckets are covered with black plastic bags, making sure they are not closed to let oxygen pass through. We also make sure the plastic bag does not stick to the sides of the bucket. We avoid this by introducing some bamboo sticks on the top of the bucket. After 10 days, remove the plastics bags. The mycelium should have spread through the whole bucket. At this time the mushrooms begin to grow.

20 days later, you will see the first crops growing from the wholes in the sides and on the top of the bucket. Don’t forget to keep a steady humidity by spraying water throughout the space where you cultivate the mushrooms. 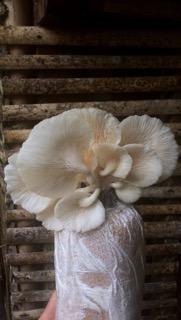 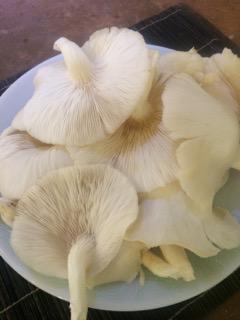 Mushrooms are ready to be harvested about four weeks after you add the mix into the buckets. Small mushrooms called “pins” are the first to appear. These mushrooms are ready to be harvested once the cap starts to bend up. You want to harvest the mushrooms before the veil ridges under the cap open and stretch out. Twist the mushrooms at the base of the stem to remove them from the growing medium (instead of pulling on them) – this allows for more growth and harvesting. We can harvest 3 to 4 times on every bucket.

Jiwa Damai (www.jiwadamai.net) is an affiliate of the NewEarth University (NEU) in association with its discipline, Ecology & Regeneration at the School of Socio-Economics & Ecology. These lovely agro-permaculture gardens are located in Bali, Indonesia and offer internship projects and volunteer opportunities for people wanting to learn about permaculture and develop their own projects.