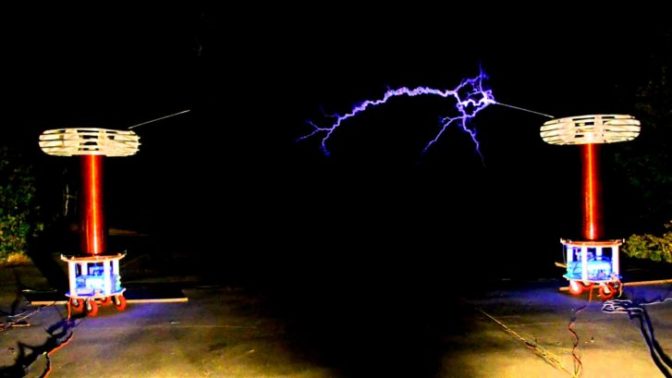 Nikola Tesla was an unsung hero in his day, as he wanted nothing more than to create free energy for all, and was a selfless creative pioneer. Sadly, Tesla died alone, unrecognized and history took a different path.

One of Tesla’s most important creations was the Tesla Coil, which according to Wikipedia is:

A Tesla coil is an electrical resonant transformer circuit invented by Nikola Tesla around 1891.[1] It is used to produce high-voltage, low-current, high frequencyalternating-current electricity.[2][3][4][5][6][7][8]

Tesla coils can produce higher voltages than electrostatic machines,[citation needed] which are another source of artificial high-voltage discharges. Tesla experimented with a number of different configurations consisting of two, or sometimes three, coupled resonant electric circuits.

Tesla used these coils to conduct innovative experiments in electrical lighting, phosphorescence, X-ray generation, high frequency alternating current phenomena,electrotherapy, and the transmission of electrical energy without wires. Tesla coil circuits were used commercially in sparkgap radio transmitters for wireless telegraphyuntil the 1920s,[1][9][10] and in medical equipment such as electrotherapy and violet ray devices. Today their main use is for entertainment and educational displays, although small coils are used as leak detectors for high vacuum systems.

While this can be used for the creation of energy, some have found another interesting use for these coils as well, as evidenced in the fantastic video above of two Tesla coils “playing” the song, “House of the Rising Sun”.

There are some other great gems on YouTube of this amazing “genre” and are definitely worth taking a peek!