The Musical Voice Within: Spirituality or Psychopathology? 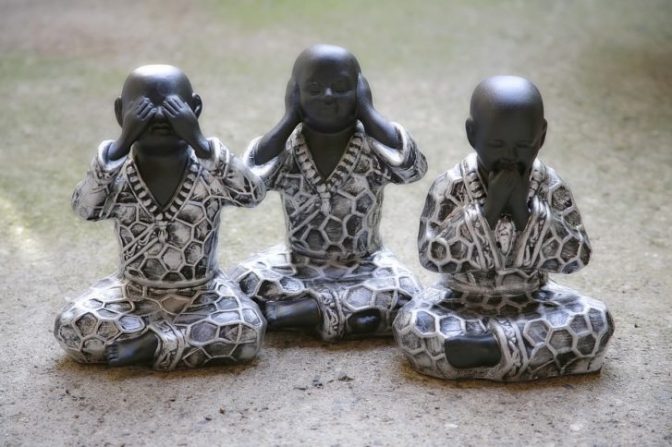 Growing up in Chicago, I knew a number of street folk who had been diagnosed as mentally ill. Many of them were highly creative individuals capable of skillfully articulating their thoughts. I watched how their ability to self-express would become distorted and disorganized when confronted by antagonistic people. For many years I saw the schizophrenic diagnosis as a dismissive and degrading strategy by which bland, conventional, and unimaginative people pathologized hyper-sensitive artists. However, after meeting a few genuinely dangerous and psychotic people, I decided to research the illness more carefully.

Some people hear voices that appear to be other-than-themselves and yet have no external correlate. In some cases, these auditory hallucinations are considered to be symptoms of schizophrenia. They are known in the medical field as paracusia, from the roots para (beyond) and akousia (acoustics / sound), suggesting a type of sound that comes from beyond the ordinary acoustic sources.

There are two major categories of sounds heard without external acoustic stimulation. Endaural phenomena usually result from a disorder of the ear, manifesting as tinnitus (ringing of the ear), hearing white noise, hearing sustained musical tones, and so forth. Every other kind of inner hearing, ranging from neurological disorders, cognitive developmental errors, to delusional psychotic states, are classified as an auditory hallucination.

Types of of Auditory Hallucinations

1) Hearing Voices: A significant number of people report hearing an inner voice that speaks their own thoughts and narrates their life. In some cases this singular voice becomes fragmented into multiple voices. Often these voices disagree and argue with one another, corresponding to the psychological distress exhibited by psychotic people.

Hearing inner voices does not always indicate mental illness. In some cases, a developmental glitch can occur during childhood. Ordinarily a child will learn to speak to their parents, then progress to private dialogues with their toys. They learn to speak internally through reading and eventually graduate to abstract thought, where thoughts can be processed internally without ever being vocalized.

Somewhere along the way, the child may fail to internalize their own voice and begin projecting the voice outward onto a fantasy image like an imaginary friend/enemy. Psychiatrists do not consider this to be pathological if it is addressed early on. Talk therapy can help guide the children back toward a healthy relationship with their inner voice.

Joan of Arc and Archangel Michael

For most of human history, the inner voice of Self and/or the multiplicity of selves had a spiritual meaning. Conscience and consciousness were derived from the wisdom that came through this inner hearing. In the beginning was the word and the word was God. To sin against God was to hear the guidance of the inner voice and defy it. Rebellion against one’s higher intuition has a fragmenting effect on the psyche, leading to the polarized state of angelic and demonic spirits that battle within the mind. Monotheistic religions portray psychological unity as union with God.

2) Musical Ear Syndrome: In some cases, the brain compensates for a loss of hearing by generating auditory hallucinations. Musicians are prone to experiencing elaborate symphonic works. Unlike psychotic patients, people with MES are not prone to “delusional beliefs”, which in scientific language means that they do not indulge in fantasy stories about the origins of the music. Two major composers of Western music, Robert Schumann and Dimitri Shostakovich, report experiences of elaborate musical hallucinations. Paul McCartney claims that the Beatles song Yesterday came to him in a dream.

Sensory deprivation associated with the loss of hearing acts like a blank canvass onto which the creative and problem solving faculties of the brain project their activities.  Within the spiritual framework, the person’s higher self / soul / genius gets to act out through the inner hearing faculties, which have existed all along but were obstructed by focus upon the external world. It follows that deep states of meditation, dreaming, and psychedelic journeying could produce the same results.

I find the distinction between psychosis and musical ear syndrome to be a fascinating example of the anti-imaginative nature of modern science. Giving your inner music a narrative context and investing some degree of belief in that story is generally considered psychotic. Reality has been so completely dissected by the reductionist-materialist worldview that anyone who dares to defy conventional thought through creative storytelling runs the risk of being institutionalized.

The Greco-Jewish mystical notion of a Harmony of the Spheres, or celestial music that could be heard during meditation, combines deep philosophical concepts of macro and micro cosmic unity with the direct experience of inner hearing. Traditionally, each of the planetary orbits was known to generate a musical tone within the imagination. A profound harmony was created by the intervals of musical pitch expressed between each planet, for those who had ears to hear it.

Our ancestors’ impulse to sublimate atypical neurological activity to spiritual narratives of cosmic union may have played an important role in the integration of these experiences. Philosophers were soul doctors and could give you a healing story to work through your conditions in life.

In contrast, psychotherapists today tend to jump toward neurological explanations and prescribe anti-psychotic medication to individuals who seriously believe they are hearing the harmony of the cosmos. If the person does not want to “admit” that this healing narrative is fundamentally “unreal”, they are likely to be diagnosed as mentally ill.

3) Paranormal Musical Activity: A few months ago, I wrote an article about the presence of paramusicality in the movie Ghostbusters II (here). The movie’s plot involves a psycho-plasmatic pink slime found to be coursing through the sewers of New York City. It responds to music with dynamic kinetic movement. In the short clip above, some pink slime is put into a toaster and exposed to music playing through a radio, causing the toaster to dance. The pink slime could be interpreted as a symbol of the relationship between the human brain and body.

Brian Wilson, lead songwriter of the Beach Boys, was diagnosed with schizoaffective disorder several decades ago. He has commented extensively on these inner voices and the work he has done with psychotherapists to overcome them. Yet he has also reported a number of strange experiences involving music composition and recording sessions that in earlier cultures would have been considered magical.

One of the most famous examples of Brian Wilson’s paramusical powers took place during the recording of a track called Mrs. Oleary’s Cow. He was living in Los Angeles and taking lots of LSD at the time. He wanted to create a song that invoked the element of Fire in a profound way. So he got to work on an atmospheric piece and named it after the Great Chicago Fire, an incident that took place in 1871, killing 300 people and burning down 3.3 square miles of city property, rendering 100,00 people homeless.

Brian asked everyone in the recording studio to dress up in fire fighter outfits. He described it as an experiment with witchcraft, inspired by his use of psychedelics. They set things on fire during the recording session to create a realistic smokey atmosphere for the musicians. In a weird turn of events, a few days after Brian recorded the track, a massive fire broke out across the street from his studio. A friend told him that an unusual number of fires had emerged throughout the greater Los Angeles area, suggesting that his music was exhibiting pyrokinetic magical power.

Brian Wilson is almost deaf in one ear due to physically abuse from his father during childhood. The combination of psychological damage and sensory deprivation (deafness) may have contributed significantly to his introversion and unusual level of musical talent. Later in life, these gifts of inner musical insight became a curse, alienating him from his neuro-typical bandmates and leading to the development of schizophrenia. The story usually stops here and the fire across the street from his recording studio is dismissed as a delusional fantasy projection based on infantile desires for control, known by the derogatory medical expression “magical thinking”.

As Within So Without

“The psychotic drowns in the same waters in which the mystic swims with delight.” – Joseph Campbell

According to psychiatric philosophy, the principle flaw of the psychotic person is to conflate their “unreal” inner spiritual world with the “real” outer physical world. From the mystical perspective, however, the outer world is a manifestation and reflection of activity taking place within our own psyche. Not only are we attracted to events that mirror our internal condition, but in many cases we actually cause them to manifest in that way.

In the language of quantum physics, our observation of life creates micro-adjustments in the way that events play out. A person with highly developed imaginative and creative drive, like Brian Wilson, may actually be capable of a-causally “dreaming up” scenarios in the world that resemble their own heightened states of consciousness. The capacity to act at a distance in this way is generally dismissed as nonsense by the scientific community.

I believe that this split between neuroscience and deep mysticism is itself a kind of collective schizophrenic condition, in which two modes of human consciousness struggle for power and narrative dominance within the collective story of our species.

Inner voices and inner music are powerful and potentially volatile energy sources within the body that can be accessed through meditation and harnessed for creative purposes.

Be careful what you wish for because it might come true.