MUST SEE: The Absurdly Bizarre Occult Ritual at the Opening of the Gotthard Base Tunnel in Switzerland (NSFW) 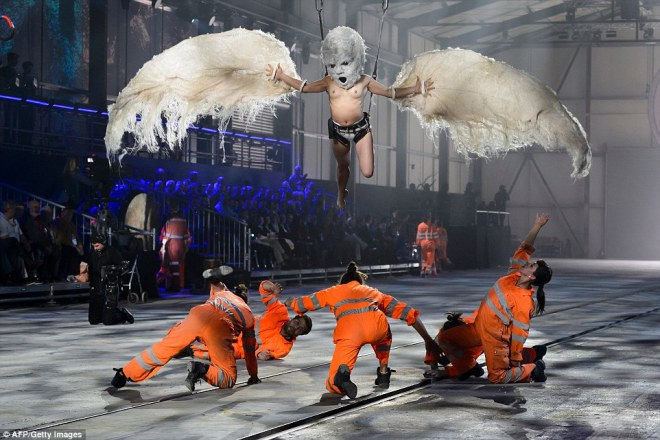 (Editor’s Note: The content in this article is disturbing and brings attention to fearful subjects.  However, I feel that spreading awareness on these issues can bring forth positive action and responsible choices.  Please use your own discretion before reading this article.)

On June 1, 2016 the Gotthard Base Tunnel in Switzerland (the world’s largest railway tunnel) marked its grand opening with an extremely bizarre ceremony.

The Tunnel cost over $8.5 billion to make over a period of 17 years (from July 5th, 1999 – June 1st, 2016), and in the process over 9 people died during construction. To commemorate the feat of labor/accomplishment, German director Volker Hesse decided to orchestrate a “celebratory” ritual that pays homage to Baphomet, the Eye of Providence, prophecy, Lucifer, fallen angels and many more blatant occult references (see gallery below).

Over 600 people participated in this spectacular performance  – and has left many wondering just who (and what) this ceremony is truly “celebrating”.

This event is yet another example of the high-strangeness occurring in Switzerland, as just a few weeks ago a video “leaked” with a “mock” human sacrifice in front of a statue of the Hindu deity Shiva that is on permanent display at the CERN complex in Geneva, which is home to the Large Hadron Collider.

Evolve + Ascend collaborator Jay Dyer, explores the reasons behind the rituals and the Elite’s obsession with Hades and the dark arts in an in-depth interview with Sofia Smallstorm which you can listen to byclicking here.

To watch the entire opening ceremony, and to see the “ritual” first hand – be sure to watch the YouTubelink below.