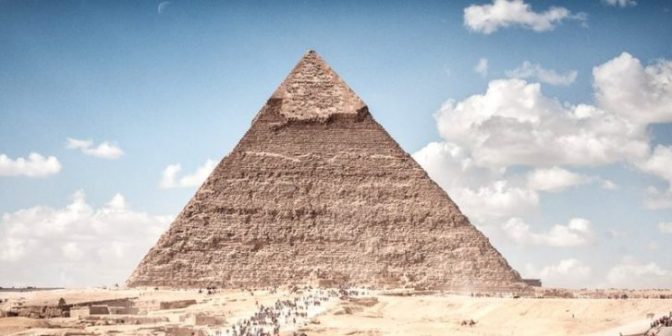 (ANTIMEDIA) — The Great Pyramid of Giza, one of the Seven Wonders of the World, has long tantalized historians and scientists. Despite being one of the most feverishly studied historical relics, the internal structure of the Great Pyramid has not yielded a significant discovery since the 19th century and, as such, it is still considered to be one of the most mysterious places on Earth. Discussions of the origin and purpose of the Great Pyramids are published in perpetuity in academic journals and internet forums alike. The newest peer-reviewed revelation, published in Nature, is sure to generate a fresh wave of hysteria. According to an international team of scientists, there is a mysterious void, a massive hidden chamber, nestled inside the Great Pyramid of Giza.

The discovery was made using a non-invasive cutting-edge technique called cosmic-ray imaging, or muon tomography. The newly discovered chamber is 100 feet long and located above the pyramid’s so-called Grand Gallery, which is one of the ancient tomb’s larger labyrinthine passageways.

Researchers are unsure what the purpose of this new chamber was, though some have speculated that it was used as a point of leverage during the original construction of the pyramid in 2560 BC.

Aidan Dodson, an Egyptologist at the University of Bristol, believes the newly discovered chamber could answer questions about how the builders of the mammoth structure operated inside.

“The pyramid’s burial chamber and sarcophagus have already been discovered, so this new area was more likely kept empty above the Grand Gallery to reduce the weight of stone pressing down on its ceiling,” he said.

“We don’t know for the moment if it’s horizontal or inclined, [or] if it is made from one structure or several successive structures,” said Mehdi Tayoubi, president and co-founder of the HIP Institute in France and one of the leaders of the study.

“What we are sure about is that this big void is there, that it is impressive, that it was not expected by, as far as I know, any kind of theory.”

Mehdi added that such a void cannot be an accident.

Hany Helal of Cairo University says the study intended to reveal more about the Fourth Dynasty of Egypt’s Old Kingdom period of history during the reign of the Pharaoh Khufu. While the team did not originally intend to seek out hidden chambers, they are now faced with a new mystery that will likely be a hotly debated topic for years.

“We open the question to Egyptologists and archaeologists,” Helal said of the enigmatic void, “what could it be?”