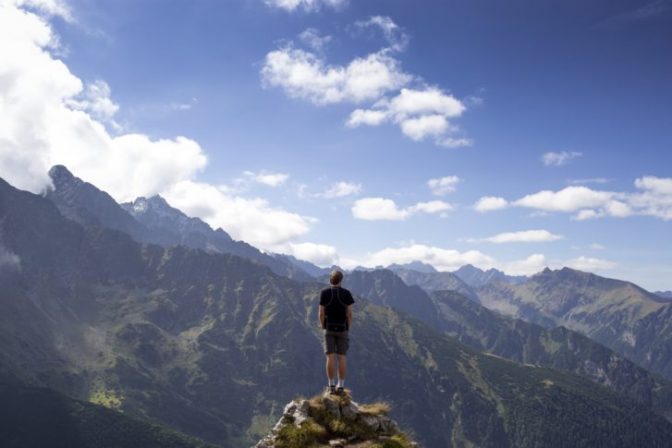 Hiking, and in particular hiking in remote areas, is a great experience if approached with due regard for fitness, safety and skill.  One of the major skill categories, is the ability to navigate with or without compass and map. Ideally, no one should head off the beaten track without map or compass, but what if you find yourself in that situation, or you lose or damage your compass?

Here are a few basic ‘skills’ that could one day be of use.

FINDING DIRECTION BY USING YOUR WATCH

If you have a watch that is working correctly, you can always quickly determine the points of the compass as long as the position of the sun is visible.  The method used varies depending upon which hemisphere (northern or southern) that you happen to be living in. The following methods are described using an analog watch, (that’s a watch with an hour and a minute hand) but they can be applied just as well if you own a digital watch – just use your imagination to superimpose the 12 hourly numerals and the relevant position of the ‘hour hand’ on the face of your digital watch.

Holding your watch horizontally, point the ‘hour hand’ of your watch at the sun.  Note the direction that lies exactly midway between the ‘hour hand’ and the numeral twelve on your watch. This will be South.  Once you have established this, it will be easy to determine the other points of the compass.

Holding your watch horizontally, point the numeral twelve on your watch at the sun.  Note the direction that lies exactly midway between the twelve and the ‘hour hand’.  This will be North.  These methods will give you a good approximation of compass direction.  If your watch happens to be adjusted for daylight saving at the time, then ‘remove’ the daylight saving for greater accuracy.

Another method of determining compass points can be used if you do not have a watch. This method takes longer and also requires enough sunlight to cast a shadow…

TO FIND NORTH WITHOUT A WATCH

Before noon, on level terrain, position a stick of about 3ft upright into the ground.  Mark the tip of its shadow with a peg or stone.  Using the tip of the shadow as a radius, draw an arc around the stick.  The shadow will shorten as it approaches noon, pulling back from the arc.  It will then lengthen again – where the afternoon shadow once again touches the arc, place another peg or stone.  Now draw a straight line between the two pegs/stones – this will be an East/West line, with the first peg being in the westerly direction.  You can now draw a North/South line at right angles to the East/West line.

The following (less accurate) method can also be used at any time of the day without drawing an arc…
Peg the tip of the first shadow, then about 20min later peg the tip of the moved shadow. Draw a straight line between the two pegs, and this will be an approximately East/West line, with the first peg again being the westerly one.

A typical error when lost, is a tendency to wander off what you may think is a straight line bearing, sometimes even slowly circling back on yourself.  To prevent this, note an object (tree, rock, terrain feature) that lies directly ahead of you in the direction you wish to travel, then aim for it.  When you reach it, take another bearing on the direction you wish to head, sight another object directly ahead of you and repeat the process.  In areas of restricted distance visibility, you may have to repeat this quite often over short ‘legs’ to ensure that you are remaining on course.

KEEPING A COURSE BY THE CLOUDS…

What if it’s a cloudy day with no sun visible to get a bearing on, or the bush canopy prevents you getting a clear “shot” at the sun?  Well, if you’re lucky, it may be windy with the clouds moving in a constant direction – note the directional flow of the clouds, and adjust your course relevant to their direction.

e.g., If the clouds are moving from your front from right to left over your shoulders, keep them there, at the same time, sight an object straight ahead of you and head for it.

To retrace your steps in the same general direction, just do an about turn, then keep the clouds moving from behind and now left to right over your shoulders, and repeat the process.

As another example of ‘cloud navigation’, once, when moving inland through dense bush away from a coastal beach, I eventually decided to retrace my steps to where I’d left my kayak. Surrounded by dense undergrowth and trees, I realized that I didn’t have any idea in which direction the coast lay.  Before entering the treeline, I’d noted that the clouds were moving in a direct line from the trees to the coastline – it was just a simple matter then of looking up and following the direction of the clouds to enable myself to head in the correct general direction and once again access the beach.

Being aware of your surroundings will often pay off, so try to cultivate that habit.