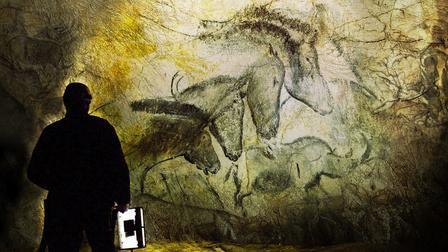 Immersion is a key feature of virtual reality. VR headsets like the Oculus Rift quite literally dictate your audio and visual input. It was hardly a century ago that humanity was in the pre-digital age. Hypnosis and imagination have always been the keys to dreamlike immersion in a fantasy. Like today’s movies and games, religious stories play upon archetypes deep within the collective human imagination. Virtual reality simulations may appear futuristic, but they can be traced back through the whole of human civilization, to its inception point in tribal animistic and spiritual cultures of the neolithic era.

The Allegory of the Cave

Human civilization has always been a virtual reality.  At the onset of culture, which was propagated through the proto-media of cave painting, the talking drum, music, fetish art making, oral tradition and the like, Homo sapiens began a march into cultural virtual realities, a march that would span the entirety of the human enterprise.  We don’t often think of cultures as virtual realities, but there is no more apt descriptor for our widely diverse sociological organizations and interpretations than the metaphor of the “virtual reality.”  Indeed, the virtual reality metaphor encompasses the complete human project.

Virtual Reality researchers, Jim Blascovich and Jeremy Bailenson, write in their book Infinite Reality; “[Cave art] is likely the first animation technology”, where it provided an early means of what they refer to as “virtual travel”.  You are in the cave, but the media in that cave, the dynamic-drawn, fire-illuminated art, represents the plains and animals outside—a completely different environment, one facing entirely the opposite direction, beyond the mouth of the cave.  When surrounded by cave art, alive with movement from flickering torches, you are at once inside the cave itself whilst the media experience surrounding you encourages you to indulge in fantasy, and to mentally simulate an entirely different environment.  Blascovich and Bailenson suggest that in terms of the evolution of media technology, this was the very first immersive VR. Both the room and helmet-sized VRs used in the present day are but a sophistication of this original form of media VR tech.

To read the whole article, by Elliot Edge, click here.