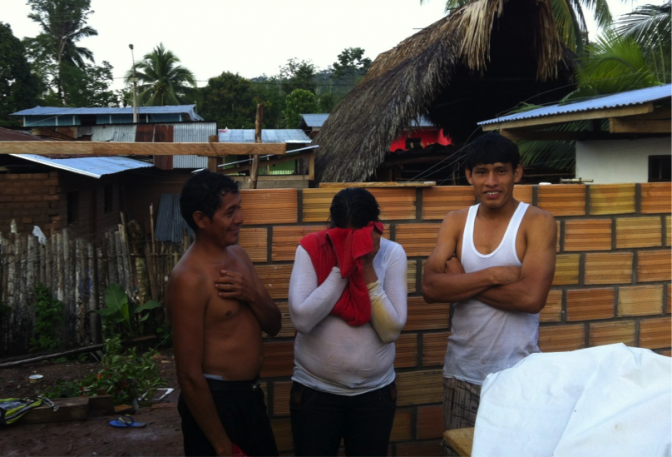 Well today has been an interesting day…

Actually, everything about this day has been unfailingly mundane, until that is, we bore witness to a hitherto unprecedented storm here in Aguano – a storm which has not only taken out our only means of communication, with $25k worth of internet mast and equipment now lying in a mangled heap, but also left the family in whose garden the mast was located without a home.

Although far more violent than usual, the storm itself was a delight, and as usual in a storm I was to be found in the middle of the street with my face to the heavens, revelling in the majesty of Mother Nature’s awesome gift. So it was quite a surprise when not 10 minutes after the storm had abated, we answered a knock at the door to find Jamil bearing news of widespread destruction – surprising because having regularly experienced as a child the bracing Atlantic winds of northern England, these 100-120 km/h winds were tame by comparison.

As usual in Aguano, it is the light-filled children who are first on the scene to lend their support – in fact in the two or so hours I was there, they had completely cleaned inside the two affected homes, whilst the adults in their typically self-absorbed style stood around talking or simply watching from the side-lines. The children here never cease to amaze me – their highly developed sense of love and compassion shines through in all that they do, and it only serves to strengthen my conviction that the Young World Leader Program (the initiative I announced in my last blog) could not be a more perfect place to start.

It is hard to see, with no means of communication, how our progress here on the ground will not be somewhat stunted, but perhaps this is just what was needed to provide the space to focus in on this project for a time, absent the endless demands of my general role in the NewEarth Project… Whatever the coming days bring, this cloud, like any other, will doubtless have a silver lining!

In closing, I’d like to return your thoughts to the family (the lovely folks in the lead image of this blog) who, with no money to speak of, are unlikely to be able to re-inhabit their home for a very long time… For little more than $300, they would be able to return inside a week, and so if anyone reading this blog would like to sponsor this family and make a big difference for what by western standards is a small amount, please do contact me…