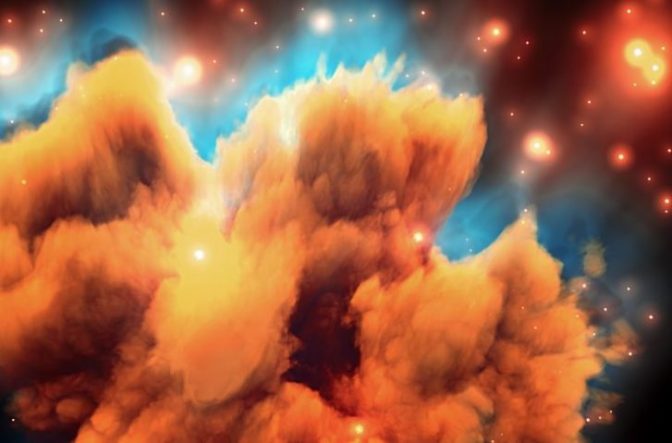 The term just sounds ominous. And though it makes up an estimated 85% of the total mass of the Universe, it has remained a mystery to physicists for 80 years. It outweighs ordinary matter, which consists of all the atoms that make up stars, galaxies, and clouds in the cosmos, by a factor of four to one. It’s become apparent that it exists solely because of its powerful gravity, with galaxies relying on it to encase them as they spin incredibly fast, keeping them together.

But despite decades of trying, nobody has been able to understand it, or its origins, more than that. Scientists theorize it produced in massive quantities in the immediate aftermath of the Big Bang, but a new hypothesis could finally give dark matter an identity.

According to two physicists, dark matter has been changing forms this whole time, beginning from particles in the Universe’s biggest structures, and shifting to a superfluid state at smaller levels.

While we can’t detect dark matter, we are able to see the way it affects everything around us, like the way galaxies rotate and light bends as it travels through the Universe. This new hypothesis, presented by University of Pennsylvania physicist Justin Khoury and Lasha Berezhiani, now at Princeton University, suggests that the reason we’ve had such a hard time understanding dark matter is because it doesn’t stay the same.

“Most of the mass [in the Universe], which is dark matter, is segregated from where most of the ordinary matter lies,” explained Khoury. “On a cosmic web scale, this does well in fitting with the observations. On a galaxy cluster scale, it also does pretty well. However, when on the scale of galaxies, it does not fit.”

The cold dark matter particles account for the massive galaxy clusters, but the new hypothesis suggests that, when looking at dark matter on a singular galactic scale, it takes on a superfluid state — a form of cold, densely packed matter with no friction or viscosity.

“Recently, more physicists have warmed to the possibility of superfluid phases forming naturally in the extreme conditions of space,” Jennifer Ouellette explained for Quanta Magazine. “Superfluids may exist inside neutron stars, and some researchers have speculated that space-time itself may be a superfluid. So why shouldn’t dark matter have a superfluid phase, too?”

The shifting states are thought to work like this: The ‘halos’ of dark matter encasing individual galaxies form the conditions needed to produce a superfluid, which serves as a gravitational pull on the galaxy to keep it densely packed. The coldness of space ensures the temperature remains low. On a larger scale, this gravitational pull is too weak to form a superfluid.

The hope is that such knowledge of dark matter’s shifting state could help physicists to better understand the elusive behaviours of individual galaxies that gravity by itself cannot uncover.

“It’s nice because you have an additional force on top of gravity, but it really is intrinsically linked to dark matter,” Khoury said. “It’s a property of the dark matter medium that gives rise to this force.”

While the hypothesis has yet to be peer-reviewed, it is still intriguing to think that the mystery of dark matter could soon be uncovered.