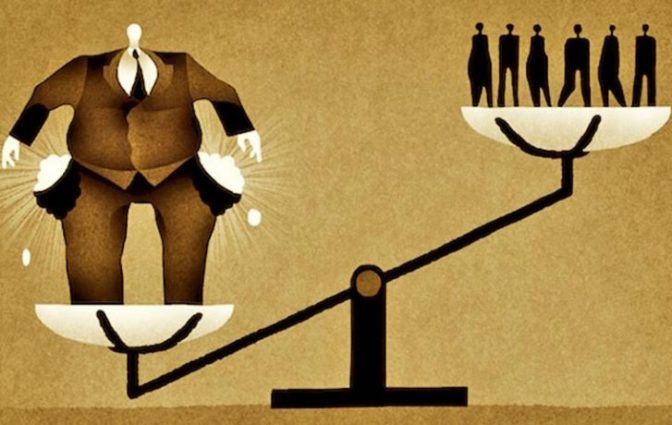 Discussions over the gap between the wealthy and the poor have led to a common assumption that inequality is directly related to globalization and technological change, making most people less competitive, and the well educated more competitive. And while there may be truth to that, the real culprit is the rising concentration of political power in a corporate and financial elite. These “elitists” have significantly altered the way in which the economy runs.

A new analysis supports this statement, showing the massive gap between those with the power, and those without. The charity Oxfam calculates the gap annually, and publishes its results to be discussed at the World Economic Forum in Davos, Switzerland, where many of the incredibly wealthy show up, as well as diplomats, political figures, and business and cultural leaders. Last year, it was found to take 62 of the super rich to match the assets of the 3.6 billion in the less fortunate half of mankind.

This year’s results are jaw-dropping, showing that just eight of the richest people in the world own as much combined wealth as half of the human race. Part of the way in which Oxfam bases its results is by incorporating Forbes’s annual list of billionaires, and the magazine’s estimates of their wealth. New data gathered by Credit Suisse was used this year regarding the global poor, which led it to lower its estimates of their assets, and ultimately edit its findings about how few rich men were required to balance the wealth of 3.6 billion people.

“It is obscene for so much wealth to be held in the hands of so few,” Oxfam executive director Winnie Byanyima said in a statement. “Across the world, people are being left behind. Their wages are stagnating yet corporate bosses take home million dollar bonuses; their health and education services are cut while corporations and the super-rich dodge their taxes; their voices are ignored as governments sing to the tune of big business and a wealthy elite.”

The world’s eight richest people collectively own an estimated $426 billion, while the poorest half of the world owns an estimated $409 billion. The report accounted for those with negative wealth, or more debt than assets. It found that the poorest 10 percent collectively has $1.1 trillion more in debt than it does in assets. That figure is then subtracted from the rest of the bottom half, which collectively has $1.5 trillion in positive net wealth, or more assets than debt.

“These people may be in debt but be income-rich, thanks to well-functioning credit markets (think of the indebted Harvard graduate),” the report said. “A number of such cases will exist.”

“However, in terms of population, this group is insignificant at the aggregate global level,” the report continued. “Across the world, the vast majority of people living in debt really are very poor.”

“To put this figure in perspective — you would need to spend $1 million every day for 2,738 years to spend $1 trillion,” the report noted.

Below are the eight richest people in the world:

Bill Gates: the founder of Microsoft with a net worth of $75 billion.

Amancio Ortega Gaona: the Spanish founder of the fashion company Inditex, with a net worth of $67 billion.

Warren E. Buffett, the chairman of Berkshire Hathaway, with a net worth of $60.8 billion.

Carlos Slim Helú, the Mexican telecommunications magnate, with a net worth of $50 billion.

Jeff Bezos, the founder of Amazon, with a net worth of $45.2 billion.

Mark Zuckerberg, Facebook’s creator, with a net worth of $44.6 billion.

Lawrence J. Ellison, the founder of Oracle, with a net worth of $43.6 billion.

Michael R. Bloomberg, the former mayor of New York and founder of the media and financial-data giant Bloomberg L.L.P., with a net worth of $40 billion.