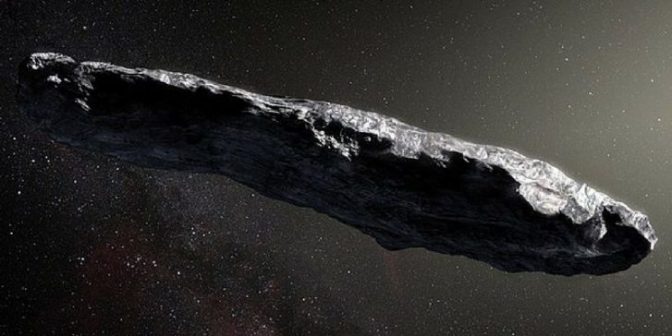 (ANTIMEDIA) — Last month, Anti-Media reported on the discovery of a giant interstellar asteroid passing through our solar system. The asteroid, named ‘Oumuamua, was the first object from another star system to be detected by the human race and stunned scientists with its shape — it is ten times longer than it is wide — and its color, a dark red hue caused by millions of years of exposure to radiation. Now scientists say the object is so peculiar that they are going to study it for signs of advanced extraterrestrial life.

The Breakthrough Listen initiative will spend $100 million to test ‘Oumuamua for radio signals. Scientists say that though it is highly unlikely, the unusual characteristics of the asteroid fit the bill of a giant interstellar probe or spaceship. Astronomers will use the Robert C. Byrd Green Bank Telescope in West Virginia to scan four radio bands for ten hours.

Igniting the wonder of many in the field, Harvard’s astronomy department chair and an adviser to Breakthrough Listen, Avi Loeb, remarked:

“The more I study this object, the more unusual it appears, making me wonder whether it might be an artificially made probe which was sent by an alien civilization.”

The Breakthrough group says the shape of the asteroid is “the most likely architecture for an interstellar spacecraft since this would minimize friction and damage from interstellar gas and dust.” However, they believe a natural origin is more probable.

Loeb cautions that we should not get our hopes too elevated.

“Most likely it is of natural origin, but because it is so peculiar, we would like to check if it has any sign of artificial origin, such as radio emissions,” Loeb says. “If we do detect a signal that appears artificial in origin, we’ll know immediately.”

Although it’s highly unlikely (to say the least) that we’ll hear anything, we’d be crazy not to have a go. It’s not everyday that we get access to a visitor from interstellar space. https://t.co/WVOqXYN0yo

“Preliminary orbital calculations suggest that the object came from the approximate direction of the bright star Vega, in the northern constellation of Lyra. However, it took so long for the interstellar object to make the journey ― even at the speed of about 59,000 miles per hour (26.4 kilometers per second) ― that Vega was not near that position when the asteroid was there about 300,000 years ago.”

Additional observations allowed scientists to determine that the asteroid is rocky, metal-rich, and contains traces of organic molecules – tholins irradiated by UV radiation. ‘Oumuamua also has a very unusual orbit that will soon eject it from our solar system.

Another group has proposed that we actually intercept the asteroid in order to study it closeup. Project Lycra is a moonshot, so to speak, as the logistics of traveling the incredible speeds and distances necessary to catch up with the asteroid would be unlike anything humans have ever attempted. However, the Project Lycra team contends this may be a once-in-a-lifetime opportunity. And technologically, they say, it is possible:

“[A] mission to the object will stretch the boundary of what is technologically possible today. A mission using conventional chemical propulsion system would be feasible using a Jupiter flyby to gravity- assist into a close encounter with the Sun. Given the right materials, solar sail technology or laser sails could be used… Future work within Project Lyra will focus on analyzing the different mission concepts and technology options in more detail and to down select 2 – 3 promising concepts for further development.”

Meanwhile, the desires of scientists who want to probe the asteroid for signs of extraterrestrial radio signals are not as sensational as they may sound. The idea of traveling inside an asteroid is a familiar idea in science fiction, and real scientists have actually proposed it as an ideal form of high-speed space travel. A paper released in 2011 suggested that astronauts could ride an asteroid to Mars. Several American companies and initiatives, including one spearheaded by James Cameron, have outlined plans for mining asteroids for minerals and even turning them into makeshift spaceships.

Surely, advanced alien races, if they exist, could have similar ideas about traveling via planes, trains, and asteroids.

The interstellar visitor has stirred the passions and imaginations of the human race. Even if there is no alien life using the asteroid as a star engine, there is much to be learned from an asteroid hailing from a different star system a long time ago in a galaxy far away (or maybe even our own galaxy).