‘The Ocean Is Missing!’: Irma Literally Sucked All the Water Away From Coastline 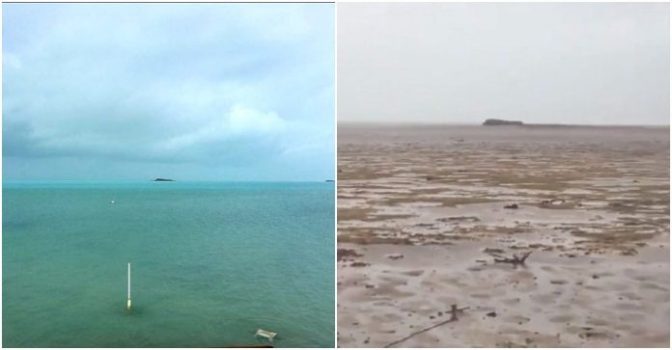 (ANTIMEDIA) — The energy behind powerful Hurricane Irma is so massive that it sucked water into itself and away from shorelines in the Bahamas on Friday. Video footage from Long Island, Bahamas, has quickly gone viral after being posted across social media when it revealed the ocean was literally missing as Hurricane Irma passed the island.

I am in disbelief right now… This is Long Island, Bahamas and the ocean water is missing!!! That's as far as they see #HurricaneIrma wtf pic.twitter.com/AhPAonjO6s

The surreal video shows an exposed dry ocean floor with no water around as far as the eye can see.

Meteorologists say the chances of seeing such an extraordinary weather phenomenon are extremely low. The Washington Post’s deputy weather editor, Angela Fritz, confirmed the video was real and explained what happened:

“Basically, Hurricane Irma is so strong and its pressure is so low, it’s sucking water from its surroundings into the core of the storm.”

“In the center of the storm, where there is extreme low pressure, water is drawn upward. Low pressure is basically a sucking mechanism — it sucks the air into it, and when it’s really low, it can change the shape of the surface of the ocean. As the storm draws water toward the center, it gets pulled away from the surroundings.”

“Hurricane Irma produced extraordinarily low air pressure (27.0 inches) approaching the Leeward Islands, when maximum sustained winds reached 185 mph for a record 37 consecutive hours on Sept. 5-6,” he said. “This exceptionally low pressure acting as a suction force, drawing air and water upwards in the circulation center. Combined with powerful winds driving water farther offshore, sea level lowered dramatically, exposing the ocean bottom. This is known as a ‘hurricane bulge’ and is a rare phenomenon that will only last a short time, before returning to normal.”

Luckily, everything seemed to have returned to normal the next day, as people who had seen the water disappear from the Bahamas coastline on Friday reported that the ocean had returned by Saturday night.

In case you’ve been living under a rock, catastrophic Hurricane Irma flooded Cuba on September 9th, leaving some towns underwater after devastating several Caribbean islands, a few of which still haven’t been heard from. The life-threatening hurricane made landfall as a Category 4 storm in the Florida Keys on Sunday morning before being downgraded to a tropical storm on Monday. More than a third of Florida’s population in the storm’s projected path has already evacuated. According to ABC News, at least three people have already been killed by Irma in Florida as of 10:30am EST, and more than one million are without power.

Below are a few more scenes of the ocean disappearing due to the extraordinary phenomenon detailed above:

so the winds in Long Island Bahamas were powerful enough to blow the water so far back that the eye can't see. It looks as if there's no sea pic.twitter.com/yemwLYUsI7