‘By the People For the People’: Kim Dotcom to Launch ‘Alternative Internet’—Out of Google’s Grip 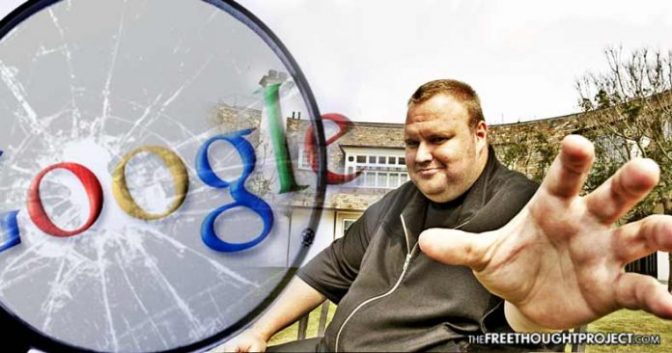 Written by The Free Thought Project

Kim Dotcom, wanted in the US for alleged widespread illegal file sharing, has vowed to build an alternative internet to combat privacy and freedom problems online.

(RT) — Having a more alternative internet that is more controlled by its users offers better options to protect ourselves, says Dmytri Kleiner a privacy activist and software developer.

Telecom giants in the US are set for a significant victory if Washington goes ahead with its plan to repeal so-called ‘net neutrality’ rules. The Obama-era legislation was enacted to prevent internet service providers from potentially cornering parts of the digital market and charging extra fees. As a result, it’s likely to have a direct impact on internet speeds in the US and cause a lot of inconvenience for users.

Meanwhile, Google has just been caught secretly collecting location data from Android phone users, even after they turned off location settings and had no SIM card in their devices.

So is there a way to escape from the increasing arbitrariness of the ‘regular internet’?

Kim Dotcom, the founder of Megaupload, who is wanted in America for alleged illegal file sharing, has pledged to create an ‘alternative internet’ to defend rights to privacy and freedom online.

RT:  What are your thoughts on Kim Dotcom’s idea? How is it possible to build an alternative internet?

Dmytri Kleiner: The current internet as it exists right now suffers from a lot of privacy concerns. A lot of those privacy concerns – some of them are inherent to the architecture of the platforms, but a lot of them are related more to the business models of a lot of the kind of companies that make money on the internet. Companies like Google and Facebook make their money by targeting advertising. And targeting advertising requires to know a lot more about you than untargeted advertising. So the more they know about you, the more they can sell these ads for.

Kim Dotcom’s proposal is not something that I’ve seen too many details about, although he has been mentioning MegaNet for a few years now I think, as early as 2015. And there are a lot of things that sound pretty good about what he is proposing. Especially the idea of using mobile devices more actively. It is not clear what he means by that – whether he means there will be an overlay network on top of the kind of IP internet that adds anonymity along the lines of something like Tor or Tox; or whether he plans to use Bluetooth, or NFC (Near Field Communication,) or direct Wi-Fi capabilities of the mobile phones themselves to create a so-called mesh network along the lines of Briar or several other applications. But in any case, more development in this area would certainly be good – the better platforms that consumers have that deliver privacy and anonymity – the more we have – the better. But that won’t necessarily affect the actual concerns of data being collected by the likes of Google and Facebook.

RT:  What about the speed at which people can use the internet. With these net neutrality rules being rolled back is Kim Dotcom’s idea a way of circumventing those alternative rules that are going to come into force?

DK: We need to know more about the architecture to make a claim either way. If it is planning to use the kind of radio capabilities of mobile phones themselves, and the Bluetooth and NFC and Wi-Fi capabilities those phones have to create another mesh network, then you could have an advantage that it is much more difficult to block than centralized things. So net neutrality wouldn’t affect it directly. However, it is still may be a slower service to what people used to right now, given a neutral internet.

RT:  What would be the drawbacks be to an alternative internet? Some people might say there is too much anonymity, and perhaps there would be sort of fair game for criminals and the like? What’s your response to that argument?

I have been working on this for a long time. Mobile networks and devices will be ready for this in 4-5 years. When it goes live our dream of true Internet Freedom shall become reality. The upcoming K.im and Bitcache apps can provide the initial critical mass for this new network. https://t.co/SIdOV2Wt2f

DK: It seems to me the criminals aren’t having a terrible amount of difficulty operating on the internet as it is today. Having a more alternative internet that is more controlled by its users, gives us better options in order to protect ourselves. We can have collaborative moderation, and collaborative block lists and stuff like that that could make user-driven ways to defend against this stuff more effective, rather than being completely in the hands of Facebook and Google and Twitter, and only being able to access the protections that they provide.

‘Govt's most experienced privacy cop’: How the FCC’s reversal of #NetNeutraility may affect you https://t.co/23cWehe1eM pic.twitter.com/myZYGW2zeX

RT:  Can you see the public taking to this alternative internet quickly, or would there be problems for them to connect? What are your thoughts on its accessibility?

DK: There are a lot of questions need to be looked at there. One is how user-friendly and usable this kind of stuff is. We know without a clear business model, like advertising that Facebook and Google have, you have to question where the investments are going to come from to create the kind of rich user experience that users are used to; to market it, to promote it, to support it – and all that kind of stuff. I mean given the right support I definitely think that an alternative could be made and it could be very popular.

The current corporate Internet will be replaced by a better Internet, running on the idle capacity of hundreds of millions of mobile devices. Run by the people for the people. Breaking net-neutrality will only accelerate the adoption of a new network. But first K.im and Bitcache.

However, it is not clear where that support could come from short of public institutions because as a private entrepreneur Kim Dotcom can only spend money that he can earn back. And it is not clear how he would earn money on such a thing, given that advertising and surveillance would not be used.