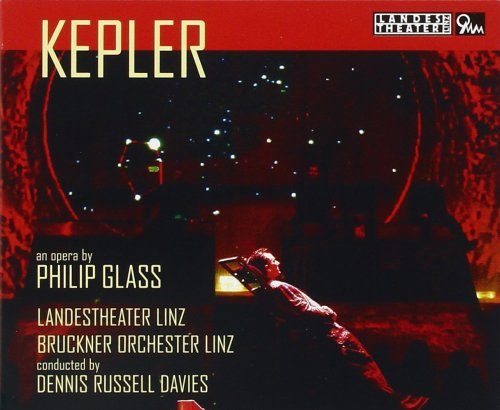 Kepler is an opera by Philip Glass dedicated to Johannes Kepler. It premiered on 20 September 2009 at the Landestheater in the Austrian city of Linz.

Kepler’s positive contributions to heliocentric (sun-centric) astronomy are often repeated in high school science classes. Few people realize that his ideas developed over many decades and during an earlier phase of his career, Kepler had presented the solar system as a collection of nested geometric forms, based on the early Greek philosopher Plato and his notion of “pure forms”.

The above images were featured in his first major book, Mysterium Cosmigraphicum (1596).

It was in this very same book on astro-musical harmony that Kepler laid out his third law on planetary motion. Here is a photo of it’s cover and an illustration from inside the book:

Curiously enough, there was another prominent family that composed celestial music during this era and was suffused with a variation on the name Johannes.

Johann Sebastian Bach, the crown jewel of Baroque music and godfather of Western classical music, came into prominence during the early 18th century. His great-grandfather lived from 1580 to 1626, placing the elder Bach on the timeline with Kepler’s publication of Harmony in 1619.

The great-grandfather’s name was Johann Bach. He was the first person in the family to show a strong interest in music. Curiously, Johann named his son Cristoph, who named his son Johann Ambrosius Bach, who in turn was the father of the famous Johann Sebastian Bach.

J.S. Bach’s music was written for the church and catalogued with very little thematic elaboration beyond the language of conventional hymns during that era. However, his work clearly implied a deep universal harmony that inspired later composers like Gustav Holst, John Coltrane, Sun Ra, and John Cage, among countless others, to compose elaborate devotional symphonies to the Celestial Harmony that Kepler alluded to.

The composition by new-era classical composer Philip Glass represents another link in the chain of high level international Astro-Music propaganda.

All the world is a song…